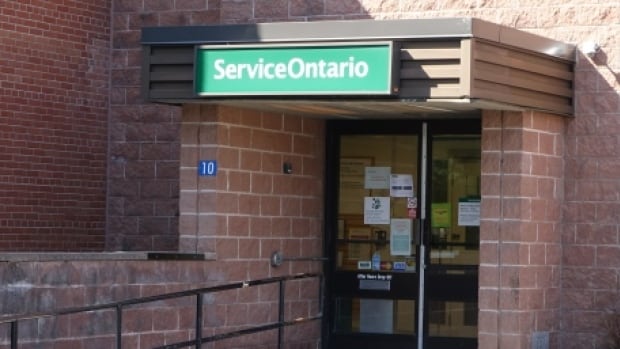 A Hamilton man says he is angry and describes as “almost insulting” an apology letter he received from ServiceOntario, after the agency said it “mistakenly” sent his health card number to an inmate at a correctional facility.

In its apology — a copy of which has been obtained by CBC News — ServiceOntario said it misidentified the man as a correctional facility inmate with an identical last name and date of birth, and that the error began as early as 2016.

CBC News has decided not to identify the individuals involved, in order to protect their privacy.

“I am very angry at the letter that I got yesterday from the province,” the 30-year-old man said Thursday.

“This letter that I got yesterday, like, it’s almost insulting. It feels like the government is giving themselves a giant pat on the back.

“It is woefully inadequate and it really almost seems to downplay what happened and it lacks something,” the man said.

The man said he first noticed there was a problem after he had blood work done through LifeLabs in July, and then went to their online portal in August to check results.

He said he found results for blood work done on a different day, and it was ordered by a doctor whose name he did not recognize.

He said after he was given what felt like a run around by both LifeLabs and ServiceOntario, he embarked on his own investigation.

“I was told that the inmate was first brought to the Toronto East Detention Centre in Scarborough in 2016; then last year he [got] arrested again, he [got] brought to the Maplehurst Correctional Complex in Milton … and then he got arrested this past July,” the man said.

“So really, for the past four years my health card number has been given out in error for an inmate.

“But I was also told that my health card number was essentially put on all the inmate’s medical records, really going back to 2016, and so that in itself is concerning,” he said.

Inmate allegedly had no form of ID

The man, who said he has never been incarcerated, said he spoke with the health-care team lead at the jail along with a deputy superintendent.

He said he was told that it’s quite common for inmates to come into the jail without a health card and they tend not to have identification on them when they are taken into custody.

Cameron Sinclair, assistant deputy minister, Customer Care Division ServiceOntario, wrote to the man on Sept. 23 to apologize for the health card mix-up, which the man identified in August.

“On behalf of ServiceOntario I apologize for this error,” Sinclair wrote.

Sinclair said ServiceOntario works hard to protect the privacy and accuracy of information entrusted to it by customers, and “we are working to learn from this incident to reduce the likelihood of this occurring again in the future.”

He said a business communication has been sent to all offices with the protocols, which were revised in January 2020, and which alleviate the risk of this occurring again.

“ServiceOntario has also contacted the correctional facility and provided them with a correct new health card number for their patient to use moving forward,” Sinclair wrote in the letter.

“Additionally, our head of privacy will be writing to LifeLabs to request their assistance in removing and correcting the erroneous lab result that appears on your record.”

CBC News has reached out to LifeLabs for comment but our request has so far remained unanswered.

The man is calling for a thorough review to be undertaken to figure out how the error happened, why it happened, and how it managed to happen for so long without coming to the attention of anyone else.

He said he has also requested a virtual meeting with premier Doug Ford or minister Lisa Thompson who is in charge of ServiceOntario.

“Yesterday the ministry offered up an assistant deputy minister for me to share my concerns with and that’s not good enough for me,” he said.

“I will do whatever it takes and I will not rest until this government offers up either the minister or the premier himself for a virtual meeting with me to hear my concerns directly, and to tell me what steps they are going to take to address my concerns, to ease my panic, and what this government is going to do to prevent this from happening again.