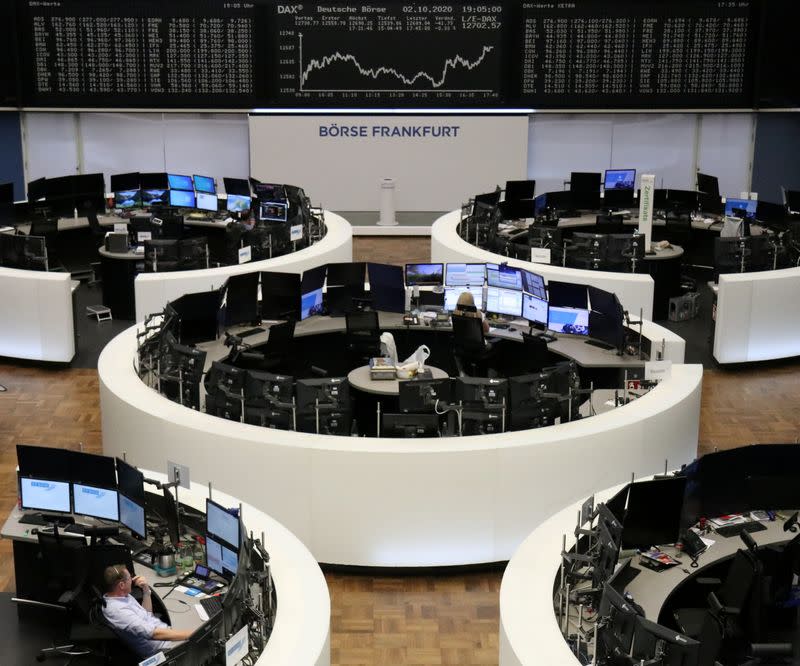 MILAN (Reuters) – Stocks and oil prices rose on Monday as stimulus hopes and suggestions Donald Trump’s health was improving brought relief to markets after last week’s rush to safety on uncertainty over the impact of the U.S. president’s COVID-19 infection.

Trump, 74, was flown to a hospital for treatment on Friday, but his doctors said he had responded well and could return to the White House as soon as on Monday.

Optimism over fiscal stimulus in the world’s largest economy also came into play after upbeat weekend comments from Trump himself and U.S. House Speaker Nancy Pelosi, who said progress was being made on relief legislation.

The MSCI world equity index, which tracks shares in 49 countries, was up 0.5% by 1214 GMT, supported by overnight gains across Asia and the early session in Europe.

Overhanging the relief rally, however, were concerns that Trump’s case could be more severe than public disclosures suggest, and that more restrictive measures by governments to slow coronavirus infections could harm the economic recovery.

Some traders were concerned by doctors’ admission that Trump had been given supplementary oxygen and steroids.

“Many questions remain including the use of the steroid drug … which is usually reserved for those with severe illness,” said Raymond James strategist Chris Bailey in London.

Trump’s infection also comes less than one month before the presidential election on Nov. 3, potentially fuelling more market volatility and making the outcome of the vote even more difficult to predict.

“In terms of the impact on the election, we haven’t seen enough polling to assess whether this increases or decreases his chances of winning,” said Deutsche Bank strategists.

According to a Reuters/Ipsos poll released on Sunday, Democrat contender Joe Biden opened his widest lead in a month in the U.S. presidential race.

The were also economic questions for markets, with a survey on Monday showing the euro zone’s recovery faltered in September as a resurgence of the coronavirus forces the reimposition of restrictions on activity.

The volatility VIX index, known as Wall Street’s fear gauge, remained close to the highs it hit on Friday.

“In the case that the markets enter a deep period of volatility or a bear market, the odds of a fiscal stimulus will rise dramatically,” said Amundi portfolio manager Paresh Upadhyaya. “This should help settle markets”.

Meantime, suggestions Trump could leave hospital sent oil prices up around 4%. An escalating workers’ strike in Norway that has shut four of Equinor’s oil and gas fields also helped drive the gains.

The dollar was traded in tight ranges, while riskier currencies gained, as investors awaited news about Trump’s health and developments in the fiscal talks in Washington. The dollar index was down 0.3% at 93.55.

But euro zone bond yields held near recent lows on worries about possible new restrictions to fight the coronavirus.

The French government has announced new restrictions, closing bars for two weeks. Other countries across Europe are also weighing up more measures.

Gold, which is often bought during times of uncertainty, fell initially. It later turned slightly positive, up 0.2% to $1,902.3, as a weaker dollar offsets news on Trump’s health progress.

(Reporting by Danilo Masoni in Milan, additional reporting by Stanley White in Tokyo; editing by Larry King and Toby Chopra)