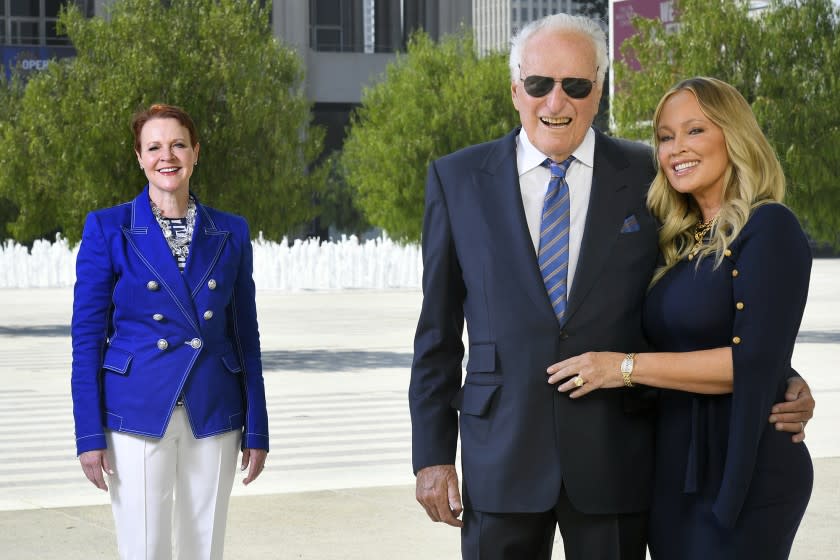 Amid a pandemic that has crippled so many arts organizations, A&M Records cofounder Jerry Moss and his wife, Tina, have given $25 million to the Music Center, the largest gift earmarked for programming in the organization’s history.

“I think they saw incredible need right now,” Music Center President and Chief Executive Rachel Moore said of the Mosses’ donation. “This is an extremely difficult moment, not just for the arts but for the community.”

The newly renovated Music Center plaza that links the Dorothy Chandler Pavilion, the Mark Taper Forum and the Ahmanson Theatre will be named Jerry Moss Plaza. The inaugural order of business, when it is deemed safe for the public to gather again, will be an annual free summer concert featuring prominent musicians that Moss said he hopes to help recruit from his network of industry connections.

“I consider myself a music man, and I would like to celebrate that at this stage of my life,” Moss said, adding that he already has a few ideas about which special guests to invite first.

The Mosses’ gift will help to pay for a new state-of-the-art sound system to heighten the experience of community gatherings in the plaza. The idea, Moore said, is to build on the Music Center’s commitment to free and low-cost programming, some of which will take place on the plaza, and some of which will take place at locations throughout the city.

“It’s going to take lots of different forms,” Moore said. “Part of this journey is for us to listen and work with our partners to create work that is really resonant and relevant to the people of Los Angeles.”

The $25 million gift, which exceeds the entire annual programming budget of the Music Center, also will be used to create a network of community partners who codesign programs. Many of these partners will be in the arts, but the Music Center will look to other groups as well, said Moore, who cited a deep connection between access to the arts and mental health and wellness.

“No matter who you are or where you come from, the arts are important,” Moore said. “They bring us beauty, solace and joy. It’s at this moment, when the world is in complete chaos, that we need the arts more than ever.”

With its stages dark and the financial future uncertain, the Music Center can use the Mosses’ gift to respond to the urgency of the times, which call not just for health and safety precautions but also for racial justice and representation, Moore said.

“We are taking this moment to make sure our institution is based on notions of racial equity that reflects in our programming,” she said.

Moss cofounded A&M Records with trumpeter and bandleader Herb Alpert in 1962 with a handshake and $200 apiece. The company grew to become a legendary music label featuring artists such as Joe Cocker, the Carpenters, Cat Stevens, Joan Baez, Sting and Janet Jackson.

Moss has supported the Music Center since 1968. The Music Center, Tina Moss said, “has been such a big part of our lives, and brought us such passion and purpose.”