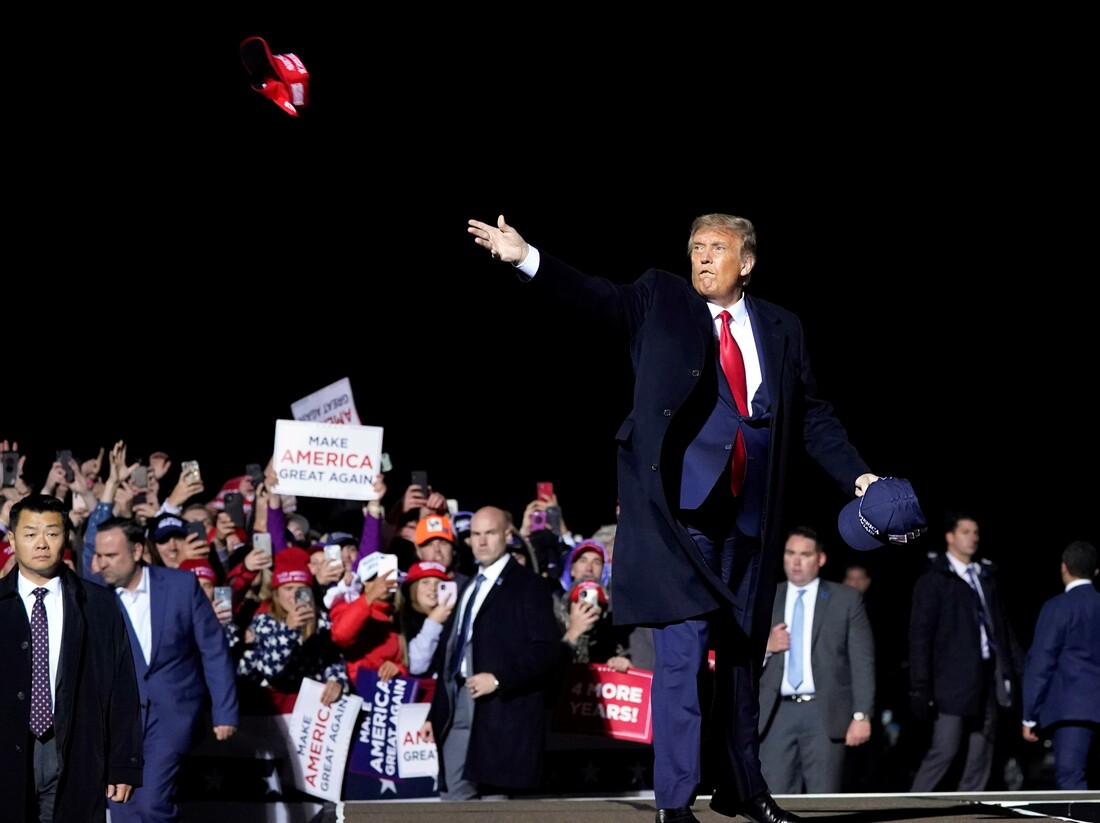 President Donald Trump throws hats to supporters after speaking at a campaign rally at Duluth International Airport on Wednesday in Duluth, Minn. 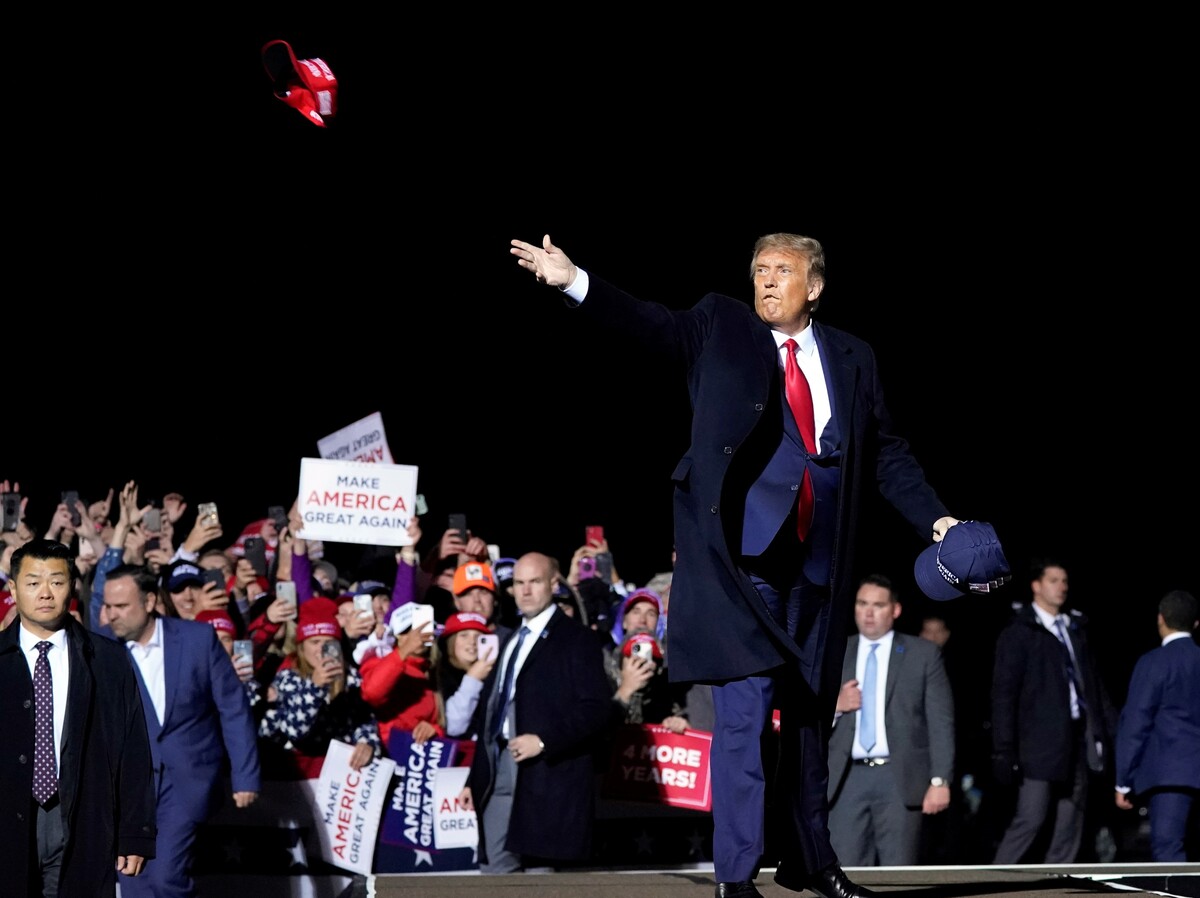 President Donald Trump throws hats to supporters after speaking at a campaign rally at Duluth International Airport on Wednesday in Duluth, Minn.

Public health officials in the cities and states that President Trump visited in recent days are working to contact those who had been in close proximity to him, the first lady and others who traveled with him.

Since he’s tested positive for the coronavirus, health officials worry those who attended events with the president could have contracted the virus too.

Over the past two weeks, Trump attended events in the swing states of Florida, Georgia, Pennsylvania, and Minnesota, as well as a fundraiser in New Jersey and of course, the presidential debate in Cleveland, Ohio. He also went to his golf club in Potomac Falls, Va., and hosted an event announcing his Supreme Court nominee Amy Coney Barrett at the White House.

One of the people attending that event, University of Notre Dame President Rev. John Jenkins, has also tested positive, though it is not clear if he was infected at that time, or if he may have contracted the virus there.

“Contact tracing is going to be really important,” Dr. David Banach, an infectious diseases physician in the University of Connecticut’s health system, told the Associated Press. “The president comes into contact with many individuals during the day.”

It’s a situation that Dr. Ashish Jha, dean of the Brown University School of Public Health, calls a “nightmare.”

He told NPR’s Morning Edition that the incubation period for the coronavirus is is two to 14 days but in reality, it is usually three to five days.

“He has been around a lot of people over the last five, seven days and certainly in the last couple of days when he was likely infectious, he was around a lot of folks, including Vice President Biden,” Jha said. “I suspect many senior members of the government are going to have to go into quarantine. There’s a lot of work ahead. This is going to be complicated. This is — while of course it’s about the president — it’s not just about the president.”

At the debate Tuesday with Vice President Joe Biden in Cleveland, neither wore masks on stage. The president has often downplayed mask-wearing and he mocked Biden for wearing his often. Dr. Amy Edwards, a professor of infectious diseases at Case Western Reserve University in Cleveland, says coronavirus could have been incubating in the president even then.

“He did test negative while he was here just prior to the debate but that was the rapid test,” Edwards says, “so I don’t know that we can really rely on that test to say he was definitely negative.

The mayor of Duluth, Minn., where Trump attended a rally Wednesday night with his wife Melania, and top advisor Hope Hicks, both of whom have also tested positive for the coronavirus, is urging anyone who attended to get tested.

“If you were at the rally on Wednesday, please wear a mask, visit your health care provider to be tested, or go to the DECC (Duluth Entertainment Convention Center) to get a free test,” said Duluth Mayor Emily Larson in a statement. “Do everything you can to self-isolate and adhere to Minnesota Department of Health and CDC guidelines to keep yourselves and those around you safe.”

The president’s rally was held on the tarmac of the Duluth airport, where according to Minnesota Public Radio, thousands of people attended, including many who didn’t distance themselves from each other or wear face masks, with the notable exception of those behind the stage and in camera view.

Prior to the campaign rally on Wednesday, Trump attended an afternoon GOP fundraiser at a private home in Shorewood, Minn., a suburb of Minneapolis-St. Paul.

Minnesota Republican Party Chair Jennifer Carnahan said in a statement that about 40 people attended that fundraiser but that she did not meet with Trump.

“I have not been in contact with any of the donors who had been at that event,” she said. “My understanding as well, they were all required to take a negative COVID test with results within 24 hours of the president’s visit to donors, and it is also my understanding that people were not allowed to shake hands or come into that close of contact with the president while he was there.”

“The commonwealth has no directive or formal recommendations for people who attended those rallies,” said Pennsylvania’s Democratic governor Tom Wolf, adding “but anybody who has been in any crowd, of any sort for any reason, where they find people have tested positive for COVID-19, you need to be very very careful.”

An official from the Republican National Committee told NPR a series of health measures were taken at a fundraiser held at Trump’s Bedminster, N.J., golf course on Thursday, which raised $5 million for the campaign. The event site was professionally cleaned and sanitized prior to the event, and the White House Medical Unit and U.S. Secret Service screened all attendees in order for them to gain access to the event.

Attendees tested negative for COVID-19 on the day of the event, completed a wellness questionnaire, and passed a temperature screening, and every guest was at least 6 ft from the president at all times, according to the official.

White House chief of staff Mark Meadows told reporters that positive test results for senior aide Hope Hicks came to light “right as the Marine One [helicopter] was taking off yesterday” to take the president to Joint Base Andrews, for the flight to New Jersey.

“We actually pulled some of the people that had been traveling and in close contact,” he told reporters at the White House Friday, explaining contact tracing had just begun. Other senior staff, including Meadows, Dan Scavino, and Jared Kushner have since tested negative, he said.

Public health officials in Somerset County, N.J., are asking Trump’s country club, the Trump National Golf Course, for a list of facility staff, event participants and other people who may have come in contact with the president and the first lady, according to a statement from the county’s department of health.

“As the public health department for Bedminster, and in conjunction with the New Jersey Department of Health, Somerset County has begun the contact tracing investigation to determine the potential risk of exposure to attendees and staff at the facility to COVID-19,” the statement says.

Dr. George Abraham, who heads the infectious disease board for the American Board of Internal Medicine, warns that “a negative test doesn’t guarantee that someone is not harboring virus” because there might be too little to detect early in infection.

Abraham told the AP that “this is a wake-up call” that shows the need for social distancing, wearing masks and other measures to reduce spread.

Trump and many of his supporters have often downplayed the severity of the pandemic and contradicted infectious disease experts on the importance of social distancing and wearing masks to slow the spread of the coronavirus.