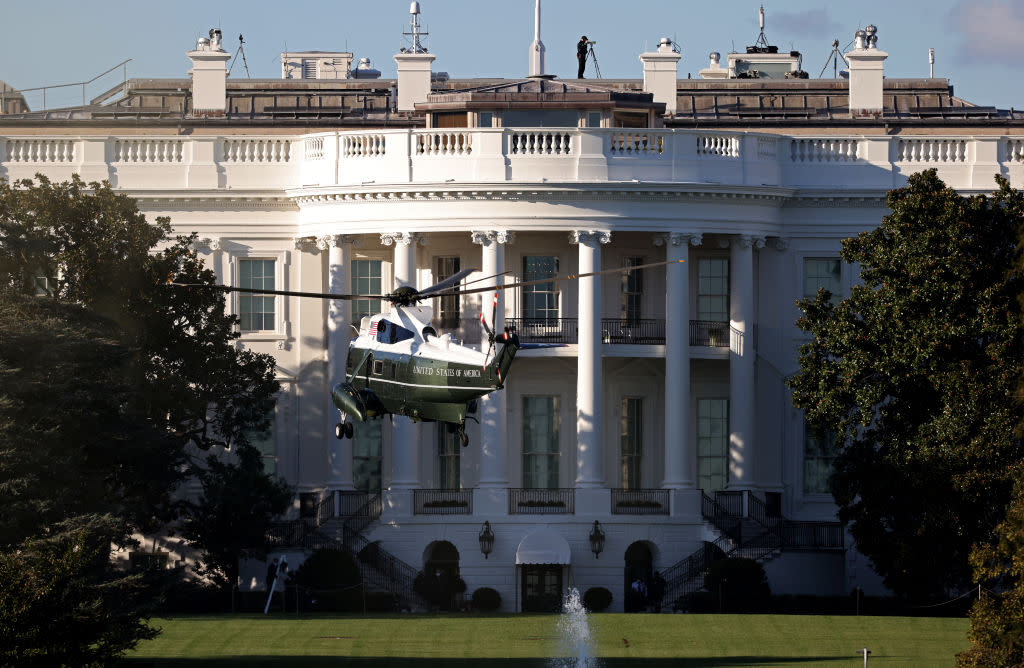 Just a few hours after revealing that he tested positive for COVID-19, U.S. President Donald Trump on Friday was helicoptered to Walter Reed Army Hospital, where he will be hospitalized for at least a few days “out of an abundance of caution,” the White House says; the First Lady, Melania Trump, has also tested positive.

How the President of the United States is treated for COVID-19 will likely be very different from how the 7 million-plus other Americans who have contracted the disease were taken care of, at least in some ways. To start, before Trump was hospitalized, his physician Sean Conley revealed that the President received an experimental drug duo from Regeneron of so-called monoclonal antibodies. The treatment can help the body’s immune system fight viruses like SARS-CoV-2, which causes COVID-19, by preventing them from infecting healthy cells.

But the treatment is still undergoing trials; an initial study was promising but involved only 275 people. The cocktail not yet been approved by the U.S. Food and Drug Administration (FDA) nor authorized for emergency use. That leaves two other ways for a person to get such a treatment. The first and most common is by signing up for a clinical trial, though there’s no guarantee that a volunteer would get the treatment rather than a placebo. The second, which Trump took advantage of, is for a person’s physician to apply to the company behind a treatment and the FDA for so-called “compassionate use,” a one-time, patient-specific authorization based on the doctor making a strong case that it’s worth trying an experimental treatment despite the inherent uncertainty and risk.

“Often we [as doctors] have to make decisions without the results of a clinical trial,” says Dr. Matthew Neal, associate professor of surgery and critical care medicine at University of Pittsburgh. “And the President’s doctors did that.”

That Trump has contracted COVID-19 well into the pandemic means that, unlike those who were sickened early on, the President will benefit from months of scientific and medical understanding of the disease. While there is still no truly standard way to treat COVID-19, Trump’s treatment both reflects what doctors have learned about the potentially fatal disease over the past nine months, and pushes the boundaries of that knowledge.

One such lesson from the past year is that COVID-19 may be best understood as two different diseases, requiring two different types of treatments. The infection itself can lead to the hallmark symptoms of fever, fatigue, headache and shortness of breath, as the virus burrows into a person’s respiratory tract and starts to replicate in the first few days after exposure. But as the virus continues to gain a foothold, the body’s immune system can mount a hyper-aggressive response. That attack on the virus, along with the inflammation that ensues, can damage the lungs and other organs and contribute to some of the more severe symptoms, including respiratory failure, blood clots, strokes and even death.

Treating the early infection—sometimes before symptoms appear—with antiviral medications, or the appropriately dedicated immune cells designed to target the virus, might help to prevent the disease from progressing to the point where the immune system starts to do major damage. The experimental treatment the President received represents one such therapy that researchers are studying. The drug cocktail is made of two monoclonal antibodies that were found from combing the blood of people who recovered from COVID-19, as well as from infected mice.

Just days before Trump announced his diagnosis, Regeneron reported encouraging results from its ongoing study of the dual-drug therapy. Among 275 people who had COVID-19 but were not ill enough to be hospitalized, those receiving the treatment showed a significant reduction in the amount of virus in their blood in seven days compared to those receiving the placebo. The drugs seemed to have the strongest effect in helping people who were slower to mount natural immune responses to the virus—essentially stepping in to battle the infection and give the patients’ immune systems time to build a stronger defense. Regeneron is also studying its combination therapy in patients who are hospitalized with more severe symptoms. But patients like Trump, who are still early in their disease course, represent the next wave of people who might benefit from the therapy.

Trump’s hospitalization strays from the general approach to caring for newly diagnosed COVID-19 patients, say doctors who have treated dozens of patients since the pandemic began. For them, the first move is enforcing an indefinite period of quarantine to limit the chances for infected people to spread the virus to others.

“One thing we have learned is that at very early phases of illness, such as where the President appears to be at the moment, is likely when patients are the most infectious,” says Dr. Jonathan Grein, director of hospital epidemiology at Cedars-Sinai and an infectious disease physician. “We have learned that patients can be infectious before they are symptomatic, and that it appears they are likely most infectious around the time their symptoms are beginning. So he is likely at the phase of his illness where there is the most potential for transmitting the virus to others.”

So far, about 80% of people who test positive for COVID-19 tend to recover with mild or even no symptoms and don’t need to be hospitalized. Instead, they require close monitoring and over-the-counter treatments like acetaminophen to reduce their fever, and fluids to stay hydrated, says Dr. David Nace, clinical chief of geriatrics at the University of Pittsburgh. “We can manage mild cases as outpatients with normal supportive care, watching them extremely closely,” he says.

The next two weeks will be vital for determining whether President Trump has only a mild case of COVID-19, or whether it progresses on to more severe disease. One certainty about SARS-CoV-2 infections is that doctors can’t predict how the virus will affect individual patients. “It is a bizarre virus because it has so many different presentations,” says Nace. He has seen people who never develop symptoms and recover, while others don’t develop symptoms until the second week of their infection, at which point they become severely ill, and still others who have very serious symptoms early in their disease and then suddenly rebound and recover. Of course, COVID-19 can also be fatal; more than 1 million people have died of the disease worldwide so far.

Trump can benefit from some of the collected wisdom gathered from the more than 34 million people who tested positive before him about deciding, for example, if and when he might need hospitalized care and whether he needs new therapies being tested for those who been have admitted. The White House has not said if Trump’s symptoms have worsened to the point where he requires supplemental oxygen or more intensive care.

When deciding if their COVID-19 patients need to be hospitalized, doctors typically look for persistent and worsening symptoms, especially difficulty breathing. “That is definitely a huge red flag,” says Grein. These patients are then admitted to the hospital mainly so they can receive supplemental oxygen to help them breathe and increase the amount of oxygen in their blood, which can drop to dangerously low levels if their breathing is compromised.

If that’s not enough, doctors turn to the experimental antiviral drug remdesivir, which the FDA authorized for use in hospitalized COVID-19 patients with mild to moderate symptoms. Like the antibodies in the Regeneron combination, remdesivir works by blocking the virus’ ability to infect healthy cells. Early studies have shown that people receiving infusions of remdesivir can shorten their hospital stay and wean themselves off of additional oxygen sooner than those not receiving the drug. Studies on the drug are continuing, however, including with people who have recently been diagnosed but only have mild symptoms and don’t need to be hospitalized.

Some patients are also receiving another type of antibody therapy in the form of convalescent plasma. It’s extracted from blood donated by recovered patients, and gives newly infected patients a boost of immune-fighting cells specifically designed to dispatch SARS-CoV-2. While some scientists, including Dr. Francis Collins, director of the National Institutes of Health, and Dr. Anthony Fauci, a member of the White House coronavirus task force, note the data on the effectiveness of convalescent plasma in fighting COVID-19 aren’t complete yet, the strategy has a long history in treating infectious diseases like influenza. The FDA approved the therapy on an emergency basis for treating COVID-19 in late August.

For people with more advanced disease, steroids like dexamethasone, which is used to rheumatoid arthritis, lupus and Crohn’s disease, can also be helpful. In more severe cases of COVID-19, as the body’s own immune system launches a hyperactive response against the virus, the inflammation begins to do more damage to healthy cells and tissues than the virus itself. Studies on COVID-19 patients show that steroids and other anti-inflammatory drugs can suppress this response and lessen the more severe symptoms of the disease on the respiratory system.

Depending on whether his symptoms get worse, Trump may also benefit from new understanding about ventilators. They were heavily used in the early days of the pandemic to rescue patients in intensive care who struggled to breathe. But the latest data show that people who were intubated and put on ventilators fared worse than those who were not. Doctors are now more judicious about using the mechanical breathing devices and rely instead on some of the more promising therapies, like convalescent plasma or remdesivir.

Doctors also now know that blood clots are a risk factor for COVID-19 patients. Neal, with support from the NIH, is testing blood thinners for hospitalized patients to lower their risk of developing dangerous clots that can lead to embolisms and strokes. It’s possible that some of the damage to the lungs might even be due to clots forming in small blood vessels there, he says. “We know SARS-CoV-2 has an effect on platelets [which cause clots], by making platelets hyperactive and over-responsive,” says Neal. “And we know there is a close link between blood clotting and inflammation, and that SARS-CoV-2 infection results in a very profound inflammatory process.”

It’s impossible to predict how Trump’s COVID-19 experience will play out—both for him and for the country more broadly. But what is certain is that Trump’s care, and the decisions his doctors make, will be the result of everything that doctors and scientists have learned from COVID-19 patients and study participants. The point, after all, is to make sure the last case is never treated the same way as the first—and to improve results for everyone.