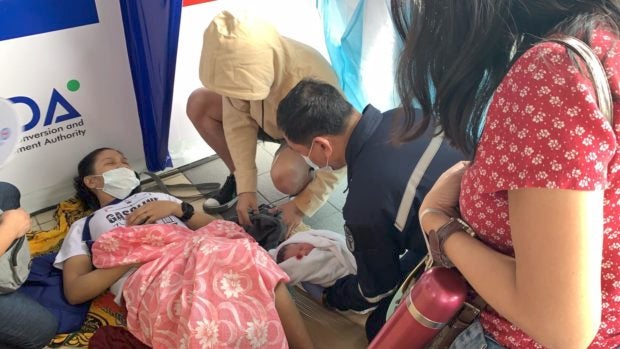 MANILA, Philippines — Police Lt. Col. Jesus Ostrea III went earlier than usual to his work at the mega swabbing center at Mall of Asia Arena (MOA) in Pasay City when he was greeted by a big responsibility to help deliver the baby of a woman.

He spotted Cherry Anne Natividad Balat, 31, whom he assisted for the reverse transcription polymerase chain reaction (RT-PCR) test for COVID-19 at the mega swabbing facility. The mother, unexpectedly, needed assistance to give birth for her baby on Oct. 6, Tuesday.

Ostrea, swabbing facility administrator, said he immediately helped give a “normal spontaneous delivery” of the baby girl at 8:20 a.m. inside the swabbing center, manned by Department of Health and the Philippine National Police (PNP) medical staff.

(The mother and daughter are in a dangerous, life-threatening situation so okay I would have to gamble everything and assist them.)

(That is our sworn duty as frontliners. It just so happened that I was there. I was not supposed to go early as the activity starts at 9 a.m.)

Ostrea was assisted by other PNP personnel as well as Bases Conversion and Development Authority (BCDA) members for first aid kit and other necessities.

After helping the woman to give birth, Ostrea felt like he was in a movie, with the audience applauding for his heroic deed.

(People started clapping, it was like a movie. I was touched because I felt like a hero. Because only a few people can offer their help in these extraordinary situations.)

Ostrea immediately called an ambulance to transport the mother and daughter to a hospital, which he said he could not divulge for privacy.

Later, Ostrea managed to visit the mother and her baby to check on their condition after receiving information from the father. He said he brought toiletries, coffee and vitamins for the family while waiting at the hospital where Balat was admitted.

On top of this, Ostrea even offered to shell out cash for hospital fees of the family.

(The family was in need of money so I felt sympathetic for them and said: “Okay I will present myself as a godfather.” But I was forced to give P5,000.)

“Pero sige lang okay lang po. We give until it hurts sabi nga nila,” he added.

(But I said it is okay. As they say, we give until it hurts.)

In a video message shared by Ostrea, Balat thanked the PNP especially Ostrea for the successful birth of her baby girl.

(I would like to thank those who helped us when I gave birth to my child at the MOA Arena especially to Col. Ostrea and others who assisted.)