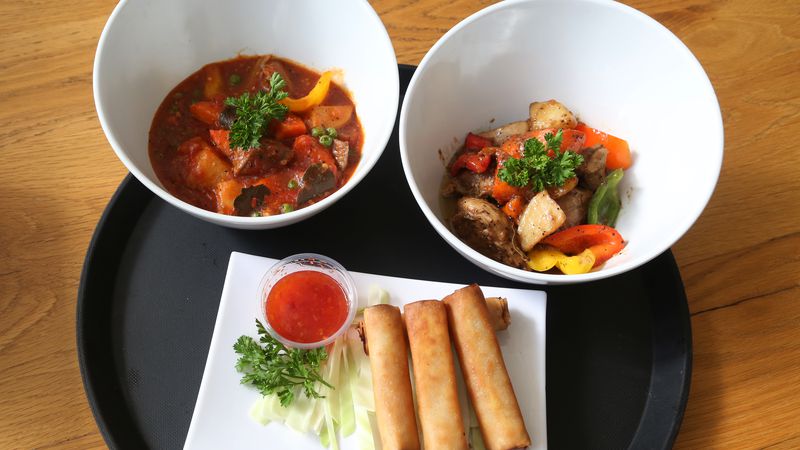 The space has since dwindled to include just two restaurant vendors, but in many ways, they feel like one. That’s likely because Pinoy, the newest addition, and Karma Juice Bar and Eatery, one of the market’s longest-running stalls, are a family affair.

Josie Barber, who owns the popular smoothie bowl and health food spot Karma, first scouted the empty market location for her sister Raquel “Jingle” Baluyut in August. Baluyut, who recently moved from Miami to the Tampa Bay area, worked catering jobs in the past but never owned her own restaurant. When her sister presented her with the opportunity to run her own spot, she jumped at it. The way Baluyut tells it, the restaurant was a “present” from Barber.

“I love to cook and I love to feed people,” Baluyut said. “I (wanted) to have a restaurant but I didn’t have enough money.”

Now, the bright and airy space feels less like an incubator for startups and more like a cohesive creation of Barber’s and Baluyut’s own making. Plants hang from the ceiling and decorate shelves. A gallery wall featuring a collection of paintings includes images of pastoral landscapes in the Philippines as well as Filipino pro boxing legend Manny Pacquiao and Catriona Gray, the Filipino-Australian model crowned Miss Universe in 2018. Though the coronavirus pandemic has prompted a takeout model for the time being, Baluyut said she imagines the business growing into a full-service sit-down restaurant at some point.

Baluyut’s family is from the Tarlac province of the Philippines, and her love for cooking stems from countless hours spent in the kitchen, learning family recipes.

“My mom taught me how to cook, until I fell in love with it,” she said. With the exception of a few vegan and vegetarian spins (more on those later) the menu doesn’t stray too far outside the boundaries of the Filipino culinary canon, a cuisine with myriad influences including Chinese, Indian, Spanish and American.

To start, bronzed lumpia ($7.50) get dipped in a sweet, sour and ever-so-slightly spicy chili dipping sauce. The crispy-fried rolls are filled with a flavorful mix of pork and carrots and fried inside a paper-thin shell. The adobo chicken ($11.95) is a classic rendition, featuring the dish’s characteristic vinegary tang with a heavy hand of black pepper, served with jasmine rice. In one of the more creative offshoots on the menu, Baluyut takes a cue from Italian arancini and stuffs the flavorful adobo chicken bits into rice balls ($4) before lightly breading and deep-frying them until they are golden and crispy.

The chicken afritada ($10.95) is a warming stew, served in a gravy thickened with tomatoes and full of potatoes, chicken, carrots and bell peppers. The pork belly kawali ($12.99), also called lechon kawali, features thick hunks of the fatty belly boiled and then deep-fried until they’re super crunchy on the outside and practically melt in your mouth.

Baluyut’s vegan takes on some classic Filipino dishes are another example of her creativity and a clear nod to some of the more health-conscious trends in the neighborhood, as well as Barber’s influence. There’s vegan pancit ($10.95), made with rice noodles, which are stir-fried with a mix of carrot spears, shredded cabbage, green onions, celery and snappy green beans. For those looking for a meatier, protein boost there’s an option to add the crispy, fatty bits of pork belly ($3) or chicken ($4). There’s also a vegan curry ($10.95), which is gluten free, too, so there’s no soy sauce used for the flavoring — just salt, pepper and coconut milk.

Though the short menu is a constant, daily specials delve deeper into the Filipino tradition and have included beef embutido (a type of meatloaf usually served around the holidays), dinuguan (an offal-forward pork stew) and oxtail kare kare (a hearty dish flavored and thickened with peanut sauce).The specials aren’t always updated online, however, so for guests ordering out, it’s best to call ahead and inquire.

Keeping with tradition, there is Halo Halo ($9.99) for dessert, the popular multicolored and textured shaved ice confection. The version here is a toppling extravagance of crushed ice and sweet, evaporated milk topped with thick strips of coconut, jackfruit, banana, sweet red beans, flan and nata de coco (jelly cubes made from fermented coconut water). Topping it all off is a big scoop of ice cream, made from ube, a bright purple yam frequently used in Filipino desserts.

Though Pinoy is sill very new, the restaurant already feels right at home in the Central Avenue market, and the partnership with Barber offers a welcoming, homey atmosphere.

Dine in: Orders are still limited to counter service, but the market space includes plenty of tables and booths as well as some outdoor seating for customers looking to dine in.

Take out: The restaurant has a Square site where customers can place their orders online for pickup. Pinoy has also partnered with Bite Squad for delivery.