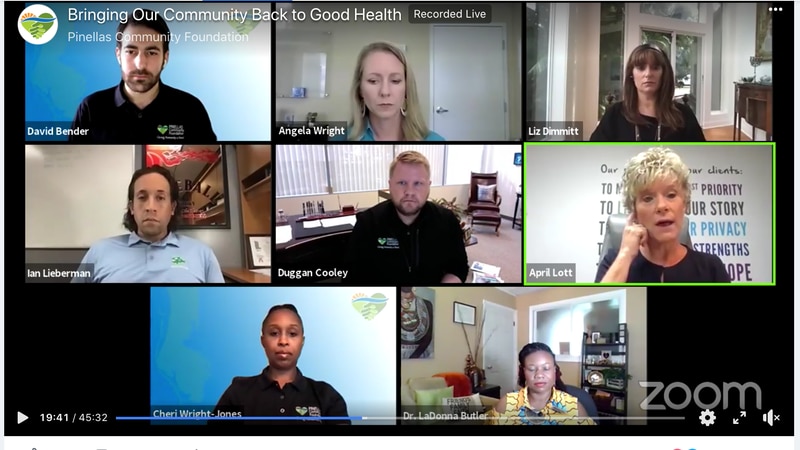 One of the initiatives will address a glaring need by giving law enforcement officers 24/7 access to telehealth mental health services. That would allow officers to remotely connect with a professional who could help them when they interact with someone with mental illness or who is experiencing a mental health crisis.

Clearwater nonprofit Directions for Living is partnering with the Largo Police Department to test the program. Directions President and CEO April Lott said if successful, the program could be expanded to other law enforcement agencies that don’t have the resources to hire their own mental health counselors or social workers.

The goal, Lott said, is to help the person in need and take pressure off officers who often have limited training helping someone in crisis.

The announcement comes amid ongoing demonstrations in Tampa Bay and across the country calling, in part, for law enforcement agencies to divert funding toward social services. In response to local protests, the St. Petersburg Police Department announced it would start a community liaison unit that will send social services workers and paramedics to nonviolent calls instead of officers to assist people with issues including intoxication, mental illness or homelessness.

Pinellas Sheriff Bob Gualtieri also recently announced that his agency would expand its mental health unit from two to six deputy-social worker teams. The unit was previously staffed with Directions social workers, but Gualtieri said he will bring those positions in-house for the expansion.

Most law enforcement agencies “do not have the resources that the (Pinellas County Sheriff’s Office) and (the St. Petersburg Police Department) have,” Lott said. “We are a densely populated county/community with a vast amount of need.”

The program, Lott said, will work like this: When an officer responds to a mental health-related call, they can use their phone or laptop to connect online to a Directions counselor, who will conduct a clinical assessment of the person.

That will help the officer decide whether the person needs immediate help, or if they can be helped by a follow-up visit from a counselor later on. If they need immediate help, the Largo Police Department’s officer-social worker team can be sent to help, or the person can be taken into custody under the Baker Act, a law that allows for an involuntary evaluation of someone believed to be a harm to themselves or others.

Lott said she expects the program will result in fewer Baker Acts, which is often the only option officers have to handle a mental health crisis — other than arresting the person and taking them to jail. In announcing the expansion of his mental health unit, Gualtieri acknowledged that law enforcement officers overuse the Baker Act because of that reason.

The telehealth pilot was sparked by a recent spike in the use of telehealth services driven by the coronavirus pandemic, which has forced doctor’s appointments, meetings and other events online. Lott said her organization went from doing about 50 telehealth appointments a week pre-pandemic to about 1,500 since the virus began spreading through Florida in March.

Directions is receiving about half the funding allotment — or about $1.3 million — for the telehealth program plus two other mental health initiatives. One will provide mental health services for 911 dispatchers.

The other is an expansion of a program called mental health first aid, an 8-hour class that teaches the skills needed to help someone experiencing mental illness or substance abuse. Lott said her organization is hoping to train 3,000 people by the end of December. Directions will offer community group classes and provide training on request to businesses, churches and other organizations.

She hopes that will help on the law enforcement side, too, because it will help community members differentiate between a behavioral health issue and a public safety or criminal issue.

The remainder of the $2.6 million was split among eight other organizations for behavioral health services. Those organizations include the University of South Florida, the Boys & Girls Clubs of the Suncoast, and the St. Petersburg Free Clinic.

Related: Police in St. Petersburg to step back from nonviolent emergency calls