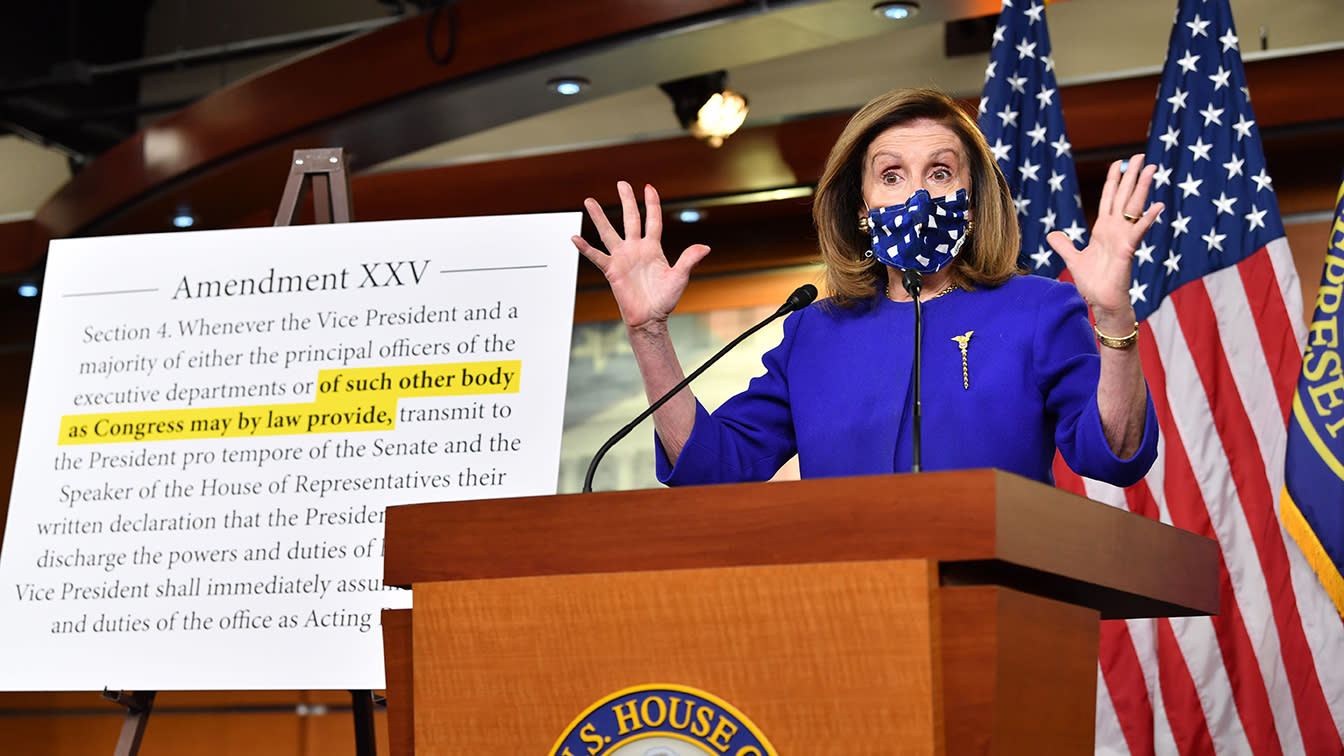 House Democrats introduced a bill Friday to establish an independent commission under the 25th Amendment to evaluate a president’s health and oversee the transfer of power to the vice president if the president becomes incapacitated while in office.

The provision would not apply to President Trump during his current term, but could be invoked in a second term if he is reelected.

The 25th Amendment was adopted in 1967 after the assassination of President John F. Kennedy to address what happens when the president of the United States is removed, dies, is incapacitated or is otherwise unable to fulfill the powers and duties of the office.

It provides for the vice president to serve as “acting president” if the president is incapacitated — during surgery, for example. It also allows for a transfer of power if the vice president and a majority of the Cabinet find the president unable to function in his office, a provision that has never been invoked. But it also, House Speaker Nancy Pelosi noted, “empowers Congress to set up an independent body to confront such a crisis.”

Pelosi unveiled the legislation on Capitol Hill Friday, a week after President Trump was hospitalized after falling ill from COVID-19.

The bipartisan commission would consist of 17 “top former elected officials and medical experts” with the authority to request a medical exam of the president.

Pelosi was joined by Rep. Jamie Raskin, D-Md., a constitutional law expert who introduced a similar measure in 2017.

“This legislation applies to future presidents,” Pelosi said. “But we are reminded of the necessity of action by the health of the current president.”

Trump was released from Walter Reed National Military Medical Center on Monday while still undergoing treatment for the coronavirus, which included supplemental oxygen, an experimental antibody and the therapeutic drug remdesivir, as well as steroids.

On Thursday, Pelosi suggested Trump’s seemingly erratic behavior since his release could be due to side effects from his drug regimen.

“The president is, shall we say, in an altered state right now,” Pelosi said. “I don’t know how to answer for that behavior.”

Pelosi and Raskin dismissed questions about the timing of the announcement of a bill — which has virtually no chance of passing the Senate — so close to an election.

“This is not about President Trump,” Pelosi said. “He will face the judgment of the voters. But he shows the need for us to create a process for future presidents.”

“There’s never really a good time to do it,” Raskin said, but he added that Trump’s health has “focused everybody’s mind on the need for following through on this suggestion in the 25th Amendment that Congress set up its own body.”

“It is good to have a standing congressional commission of experts capable of making this critical constitutional assessment,” Koh told Yahoo News. “Otherwise, the 25th Amendment is in the hands of the vice president and eight officials appointed by the president himself, who are less likely to make the necessary objective constitutional determination of whether any given president has become unable to discharge the powers and duties of his constitutional office.”

Trump responded to the introduction of the bill in a tweet suggesting it had more to do with his opponent’s health than his.

“Crazy Nancy Pelosi is looking at the 25th Amendment in order to replace Joe Biden with Kamala Harris,” the president tweeted. “The Dems want that to happen fast because Sleepy Joe is out of it!!!”