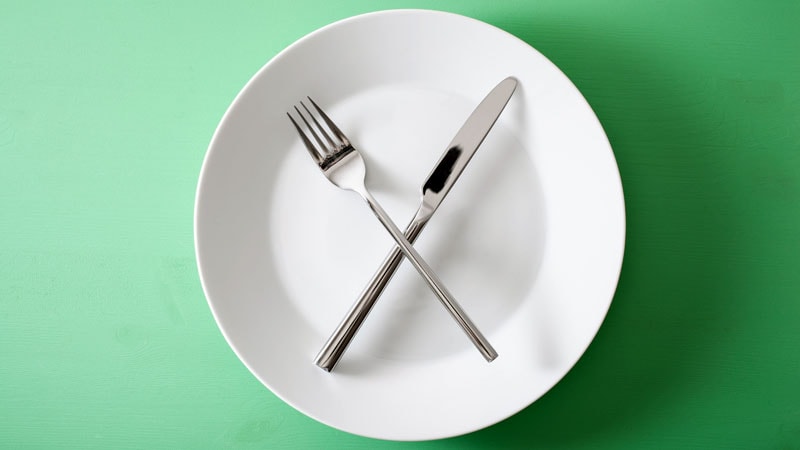 Greater fat tissue mobilization can be achieved through early-day fasting in comparison to consuming a low-carbohydrate breakfast or a Mediterranean-style breakfast, shows a small study that explored the short-term effects of intermittent fasting by lean people.

The study also found that consumption of a low-carbohydrate breakfast results in longer suppression of hunger compared to a Mediterranean breakfast.

Dimitrios Tsilingiris, MD, PhD, led the study and presented the findings recently at the virtual meeting of the European Association for the Study of Diabetes (EASD).

“Through fasting intervals as short as those achievable through a 16:8 restricted feeding scheme, a substantially and measurably increased fat tissue mobilization ― as indexed by increased ketone body production ― may occur,” said Tsilingiris, reporting the main finding.

He added that for most ketogenic diets, time is needed for the switch toward fat burning, but the findings from this study could provide support for an “on-demand” application of this strategy.

“The quite high subjective hunger scores at the end of the fasting sessions should also be taken into account, since the feeling of hunger may obviously drive the subsequent caloric quantity intake,” Tsilingiris, formerly of Laiko General Hospital, Athens, Greece, but now based at the University Hospital Heidelberg, in Germany, pointed out.

Anne-Marie Aas, PhD, clinical dietitian and associate professor at Oslo University Hospital, Oslo, Norway, was session moderator. She told Medscape Medical News that she welcomed the study because there is a lack of human studies of the clinical implications of different forms of intermittent fasting.

“The findings from this Greek study in healthy people is interesting but not surprising, since a prolonged fast would naturally prolong the time the metabolism yields energy from fat stores,” she said.

“The most interesting finding is perhaps that fasting resulted in increased hunger, while the low-carb breakfast suppressed appetite for longer than the typical Mediterranean breakfast.” she said.

“This is in line with an earlier study from the same group [as reported from EASD 2018] showing that morning-time carbohydrate restriction resulted in greater weight loss in obese individuals over a 2-month period,” she noted.

Tsilingiris explained that evidence in the literature suggests that intermittent fasting is associated with numerous health benefits. The term refers to a relatively heterogeneous group of dietary habits that commonly include prolonged fasting intervals within a month (periodic fasting), a week (5:2, alternate day fasting), or a day (time-restricted feeding, 16:8).

In theory, intermittent fasting leads to loss of fat tissue through a metabolic milieu that promotes fat mobilization, he said.

“To our knowledge,” he said, “this hypothesis regarding the shortest-term application of intermittent fasting ―that is, the increasingly popular 16:8 ― has not been put to the test until now.”

He and his team investigated early-day fasting for adipose tissue mobilization, as indicated by β-hydroxybutyrate levels, and they compared this approach with two different kinds of breakfast.

“We compared the ketogenic response of [early-day] fasting to that following a zero-carb and a standard Mediterranean breakfast,” Tsilingiris said.

In the study, participants had dinner at 8:00 PM. The following morning, they either had breakfast or they fasted from 8:00 AM to 2:00 PM.

The sessions were held at least 1 week apart but no more than 3 weeks apart. All participants had identical dinners on the preceding evening.

Insulin levels were lower and mobilization of fat tissue was greater (highest beta-hydroxybutyrate levels) when the participants were fasting intermittently in comparison to when they were having breakfast (either zero-carbohydrate or Mediterranean style).

When fasting, the adjusted area under the curve representing β-hydroxybutyrate concentration was 6.17 mmolh/L. By contrast, it was 4.16 mmolh/L after the zero-carbohydrate breakfast and 3.65 mmolh/L after the Mediterranean breakfast, when adjusted for fasting duration HOMA-R and triglyceride/HDL ratio.

For the individuals who had breakfast, there were no differences in ketone body levels and beta-hydroxybutyrate levels, regardless of the type of breakfast they had.

However, there was a difference in hunger score regarding the two breakfasts.

“The fasting state was associated with high subjective hunger scores, while a more durable hunger suppression was achieved after the low-carb breakfast intake compared to the Mediterranean breakfast,” reported Tsilingiris.

In the late postprandial stage (3 – 6 hours after eating), measures of hunger on the visual analogue scale were 16.0, 7.5, and 12.0 for fasting, zero-carbohydrate breakfast, and Mediterranean breakfast, respectively.

There was a small but significant difference in insulin levels across all three groups.

Insulin levels were “quite a lot higher in the Mediterranean compared to the low-carbohydrate breakfast, but that did not translate to a measurable difference in ketone body production between the two approaches,” Tsilingiris explained.

He speculated on why this might be the case: “It doesn’t take a whole lot of insulin to inhibit ketogenesis and/or lipolysis among lean, apparently metabolic healthy individuals.”

There are undoubtedly “many other regulators ― for example, hormonal, rather than just insulin, that play a role in the modulation of the studied effects ― that we did not take into account in the current study and could have influenced these observations,” he noted.

In a comment, Aas pointed out, “Another study presented at another EASD session [Krista Varady, University of Illinois: Clinical Application of Intermittent Fasting] showed that similar interventions over 3 months resulted in an unintentional decrease in calorie intake of approximately 500 kcal/d, weight reduction, and improvements in several metabolic risk factors.”

Tsilingiris and Aas have disclosed no relevant financial relationships.