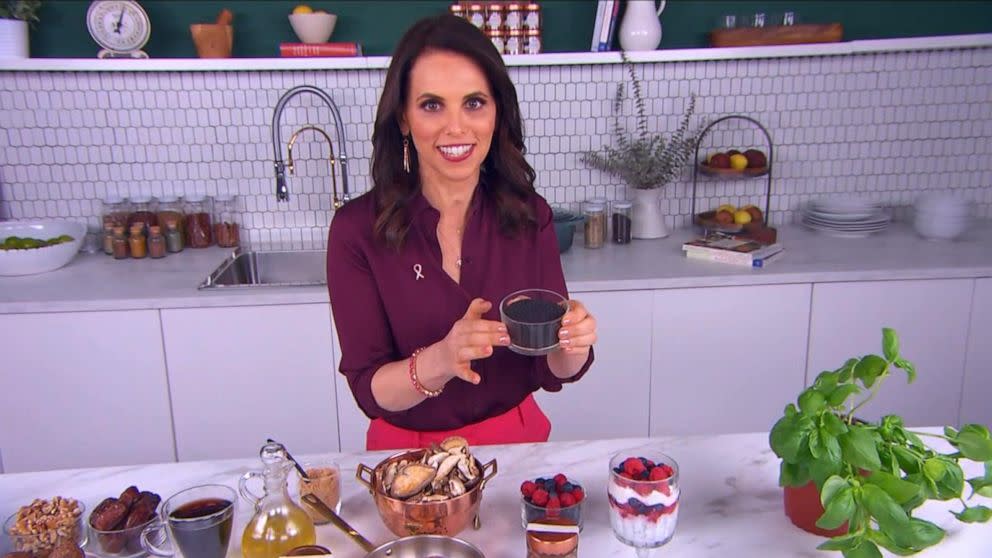 Foods can help women thrive on their breast health wellness journey and one expert has just the right ingredients to be proactive with breast health.

What to know about 3 trendy diets for 2020: Prebiotics, plant-based and intermittent fasting

Beller said basil seeds are her favorite seed because like chia seeds they form a gel in a quicker time (1-2 minutes) but they’re even higher in fiber, which she said is good for gut and breast health.

Basil seeds have 8 grams of fiber per tablespoon compared to 5 grams in chia seeds. They also contain a soluble fiber called pectin, a prebiotic that feeds the good bacteria in your gut.

They are also high in anti-inflammatory omega-3 fatty acids and fiber is linked to reduced breast cancer risk.

Beller’s recipe combines cashew yogurt with probiotics, a spice blend to give the breakfast a sweet flavor and ceylon cinnamon to add sweetness without the sugar spike. She tops it with ginger, which has anti-inflammatory, antioxidant compounds, which some studies have suggested has cancer protective properties, and orange peel that contains hesperidin and D-limonene which have been shown to potentially support breast health.

Beller said mushrooms are one of her top breast health foods because higher mushroom intake may be associated with lower breast cancer risk.

Mushrooms also contain aromatase inhibitors, which are compounds that may reduce the activity of an enzyme that produces estrogen.

They’re also rich in a special fiber called beta-glucans which have been shown to have potential immune-enhancing and prebiotic properties.

Beller explained that people don’t need to get the fancy, fresh varieties of mushrooms to reap the same nutritional benefits. Dried and organic mushrooms are super versatile and amazing to keep in your pantry.

After boiling the dried mushrooms in water for 15 minutes, drain them and sauté in avocado oil, add spices, herbs and more.

The rehydrated, sauteed mushrooms can be a side dish or prepared as a main dish by stirring in cooked lentils.

Mushroom powder, while very trendy, is also a concentrated source of nutrients because it’s dehydrated and ground into a powder.

The powder can be added to coffee, tea and smoothies, but with it’s savory profile can also be a great addition to salad dressing or lunches.

Each ingredient has breast health benefits, with fiber and antioxidants from dates and omega-3 filled walnuts and spices.

Combine finely chopped dates, which have a low glycemic index and work as an excellent natural sweetener, walnuts, which are anti-inflammatory and may support breast health, and spices like cinnamon, cacao and turmeric.

The combination of cacao and turmeric has been shown to have more cancer protective potential than either spice alone. Cacao contains a nutrient called quercetin which increases the absorption of curcumin, the active compound in turmeric.