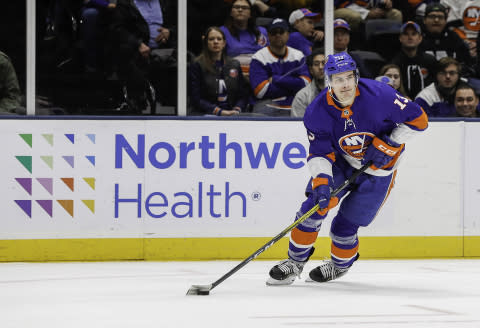 Northwell Health, New York’s largest healthcare provider and private employer, announced today a 10 year founding sponsorship deal with the Islanders and UBS Arena – the metropolitan area’s most anticipated, cutting-edge live entertainment and sports venue and the future home of the New York Islanders. The deal with UBS Arena – scheduled to open for the 2021-22 NHL season at Belmont Park – is the latest extension of a decades-long relationship between the New York Islanders Hockey Club and Northwell as the official healthcare sponsor for the team and title sponsor for the team’s East Meadow practice facility.

As part of the agreement, Northwell Health, UBS Arena and the New York Islanders will codevelop community-based wellness programming. These efforts will span across key pillars of health, nutrition and physical activity – playing a critical role in the future welfare of millions of people for many years to come.

“We are proud to align ourselves with New York’s newest premier sports and entertainment venue,” said Michael Dowling, president and CEO of Northwell. “New York, and especially Long Island, is home to thousands of our patients as well as our employees. With 25,000 employees living near UBS Arena alone, this partnership allows us to reinforce our commitment to serving the community and we look forward to developing future health and wellness programming with UBS Arena and the New York Islanders.”

“UBS Arena will be ready to welcome fans back to arenas, ensuring an unrivaled, distinctive live entertainment experience that is reflective of our commitment to unmatched service, safety and sanitization,” said Tim Leiweke, CEO of Oak View Group and leader of the arena project. “Planned top-of-the-line sanitization efforts from medical grade HEPA filtration, to UV light systems, and disinfecting solutions that have proven safe and effective in large-scale public spaces will ensure future guests peace of mind.”

UBS Arena will employ a mix of industry-leading sanitization technologies paired with operational, staffing, contactless technology and cleaning solutions to ensure the health and safety of patrons and staff are of the utmost priority. Additionally, UBS Arena is being developed to achieve WELL Health-Safety Rating for Facility Operations and Management from the International WELL Being Institute (IWBI). UBS Arena is committed to following CDC, New York State Department of Health, and Nassau County Department of Health recommended guidelines to ensure the arena presents an environment in which its guests can feel comfortable and safe to enjoy live entertainment and sports.

About the UBS Arena Project

UBS Arena is New York’s next premier entertainment and sports venue and future home of the New York Islanders. Located at Belmont Park in Elmont, New York, the state-of-the-art facility is projected to open for the 2021-22 National Hockey League season and will host more than 150 major events annually. The significant redevelopment project is expected to create 10,000 construction jobs and 3,000 permanent jobs, generating approximately $25 billion in economic activity over the term of the lease.

Developed in partnership with Oak View Group, the New York Islanders, and Sterling Project Development, UBS Arena is poised to be one of the area’s – and the nation’s – most prestigious and appealing venues for musical acts, events and performers of all genres, and will create the best and most unique entertainment experience for artists and audiences alike. The venue is being constructed with a fan-first approach that leverages sophisticated engineering acoustics to amplify the audio experience, high-resolution LED displays and will include the largest scoreboard in New York.

UBS Arena will offer the highest-end amenities and customer service, through VIP suites and clubs that merge boutique hospitality with live entertainment. Clubs and suites will have a timeless design inspired by classic, well-known New York establishments and will offer premier views of the bowl. Complementing UBS Arena, Belmont Park’s campus will comprise 315,000 square feet of luxury retail and will include a 4-star boutique hotel with approximately 200 rooms.

UBS Arena is being built to achieve Leadership in Energy and Environmental Design (LEED v4) standards for Building Design and Construction. In an effort to build a greener future, UBS Arena is working with world-class sustainability experts to minimize the environmental impact of the venue and become a zero waste facility, utilizing renewable energy sources and reducing water and electricity consumption.

Northwell Health is New York State’s largest health care provider and private employer, with 23 hospitals, nearly 800 outpatient facilities and more than 14,200 affiliated physicians. We care for over two million people annually in the New York metro area and beyond, thanks to philanthropic support from our communities. Our 74,000 employees – 18,500 nurses and 4,500 employed doctors, including members of Northwell Health Physician Partners – are working to change health care for the better. We’re making breakthroughs in medicine at the Feinstein Institutes for Medical Research. We’re training the next generation of medical professionals at the visionary Donald and Barbara Zucker School of Medicine at Hofstra/Northwell and the Hofstra Northwell School of Nursing and Physician Assistant Studies. For information on our more than 100 medical specialties, visit Northwell.edu and follow us @NorthwellHealth on Facebook, Twitter, Instagram and LinkedIn.

About the New York Islanders

The Islanders play in the Metropolitan Division of the National Hockey League’s Eastern Conference and have had nine members inducted into the Hockey Hall of Fame.

The Islanders Children’s Foundation has helped countless youngsters in need around the world since its inception. Donations are raised through the efforts of our players, management and employees, along with our fans and sponsors.

UBS Arena at Belmont Park will be the team’s home starting with the 2021-22 NHL season.