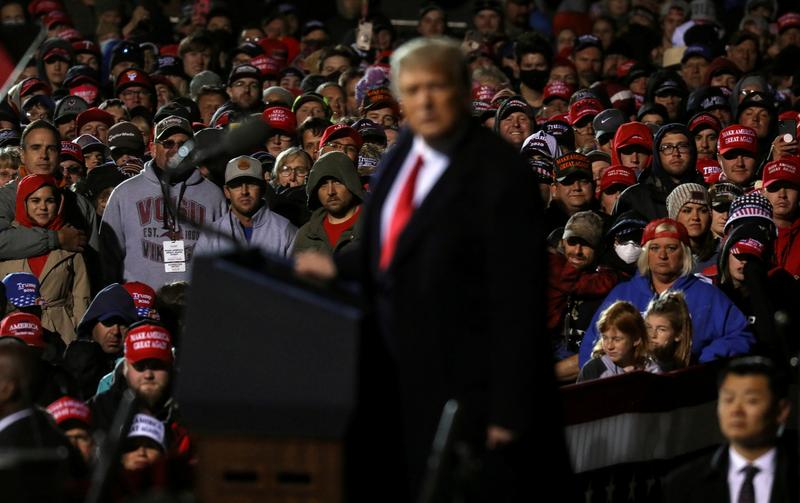 (Reuters) – Callie Kaspszak, a 19-year-old registered Republican, was somewhat worried for her health when she heard on Friday that President Donald Trump had tested positive for the coronavirus, two days after she had attended his campaign rally in Minnesota.

But she had no regrets about going, she said.

“It’s a little worrying that there’s a possible exposure, but I did what I could to the best of my ability to protect myself,” the University of Minnesota Duluth student said in a telephone interview, adding that she wore a mask and was far from the stage.

Officials in Minnesota and New Jersey on Friday urged hundreds of people who attended Trump’s campaign events in those states this week to get tested for COVID-19.

Trump, who has played down the threat of the coronavirus pandemic from the outset, said that he and his wife Melania were going into quarantine after testing positive for the virus just hours after hosting a fundraising event in Bedminster, New Jersey.

On Wednesday, Trump held an outdoor campaign rally in Duluth, Minnesota with hundreds of attendees. Video shows Trump tossing campaign caps into the crowd, not all of whom were wearing masks.

On a stage several feet away from his front row supporters, Trump would not have been likely to transmit the virus widely in the crowd if he was contagious, based on health experts’ understanding of how COVID-19 spreads outdoors.

But his positive test raised alarm among health experts, serving as a reminder that large group gatherings pose a high risk of outbreaks.

The Minnesota Department of Health said those who attended events including the Duluth rally and a fundraiser in Shorewood should get tested even if they were not showing symptoms.

“There is a potential risk that transmission occurred at the Duluth rally and other events associated with President Trump’s visit. Community transmission of COVID-19 was high in St. Louis County prior to this week’s rally, and people attending the rally may have been infectious without realizing it,” the department said in a statement.

Six people who attended the rally in Duluth told Reuters they were not concerned.

“I personally don’t feel like I’m going to be affected by it, I don’t think my dad will be affected by it,” said Daniel Peters, a 28-year-old aerospace industry worker, who attended the rally with his father, who is over 60.

Peters, who plans to vote for Trump for a second time, said he believed the president had done “a decent job” handling the coronavirus crisis. Peters said he did not think the president’s inconsistent mask-wearing was likely to blame for his contracting the virus, citing instead Trump’s busy travel schedule.

Simon Eddy, a 24-year-old engineer who supports Biden for president, said he attended the rally to see what the hype was about. He said he knew he could be exposed to the virus at the crowded event but did not think he could have gotten it from Trump.

“Anyone who went to that event is putting themselves at risk,” Eddy said.

Duluth City Council President Gary Anderson said the rally flew in the face of precautions taken so far by the city, which was early to enact a mask ordinance and had adhered to state guidelines limiting outdoor gatherings to 250 people.

“That was a huge event. There hasn’t been any other event like that in Duluth since the pandemic,” Anderson said. “It is disappointing that President Trump wanted to come here and flouted our state laws and took risks with our own health.”

In New Jersey, some questioned Trump’s decision to go ahead with the fundraiser at his Bedminster golf club on Thursday after staffer Hope Hicks tested positive. Some at the event wore masks while others did not, a source familiar with the event said.

New Jersey Governor Phil Murphy encouraged those who attended the event to get tested.

“We urge everyone who attended yesterday’s event in Bedminster to take full precautions, including self-quarantining and getting tested for #COVID19,” Murphy wrote on Twitter.