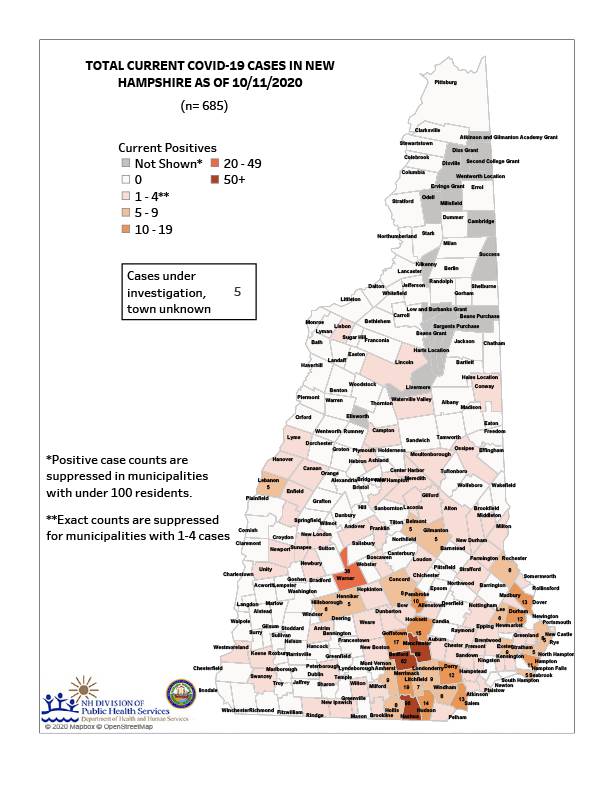 Cases of COVID-19 are rising in states across the country, and in New Hampshire there is evidence of increasing community transmission.

The state’s two largest cities, Manchester and Nashua, are both experiencing this community transmission. Spokeswoman for the New Hampshire Department of Health and Human Services Laura Montenegro wrote via email Friday that the densest population of residents in the state reside in Nashua and Manchester, so increased cases in those two cities would be expected.

She explained how officials are seeing that places where many people congregate are high-risk settings, more so if they are inside. These sorts of settings can include weddings, sporting events, birthday parties and church gatherings.

“That risk increases if those individuals aren’t wearing masks and if they are singing or yelling or sharing cups,” Montenegro stated.

According to data last updated Friday on the NH DHHS website, the number of COVID-19 cases in New Hampshire stood at 8,970 with 450 deaths. The state’s total current cases of COVID-19 stood at 585.

Additionally, more than half of the states across the country are reporting a rise in new positive cases this week as well.

“We believe that there is also evidence of increasing community transmission, especially in the southern communities and southern parts of our state, in particular Hillsborough, Rockingham and Strafford counties,” State Epidemiologist Dr. Benjamin Chan said during a press conference on Thursday. “As we identify people with COVID-19, we continue to conduct public health contact investigations on each and every person to identify close contacts who are then tested to identify additional infection.”

The state learned of an outbreak of COVID-19 cases at the Gate City Church on Main Street in Nashua early last week, which has since resulted in 13 cases as of the end of the day Thursday, according to Director of the Division of Public Health and Community Services Bobbie Bagley. However, she added that this number is fluid because testing was done Thursday and Friday.

“Right now, we are trending even above that as more cases continue to be identified, and the reason why we’re seeing more cases identified is because we’ve been doing testing,” Bagley said.

Since city officials learned of this outbreak on Oct. 5 the city’s public health department has been working with the state and the church to try to identify anyone who might have been in contact with an individual with a positive case.

NH DHHS addressed this outbreak in a press release issued by the Bureau of Infectious Disease Control on Wednesday about potential community exposures connected to the positive cases at the church.

“DHHS and the Nashua Division of Public Health and Community Services are investigating these illnesses further and the church has moved to hosting virtual services only,” states the press release.

During a press conference held Thursday, Bagley said that officials know someone attended a service that was infectious at the church but may not have known they were carrying the virus.

A multi-day prayer service was held at the church between Sept. 18-28 and Bagley said that the church followed the rules outlined by the state with regards to social distancing, making sure families were spaced 6- to 10-feet apart and were wearing their masks.

“At one point during their service they did take their masks off once they were in their family units to sing, to have a good time praising god.” Bagley said during the press conference. “Singing, however, in an enclosed building is one of the riskiest exposure opportunities with the virus and although there was nothing that was intended to cause any harm, this situation did allow for extensive exposure at this church.”

Now, city health officials are urging people experiencing any signs and symptoms who know they’ve been at the church during that time period to seek testing. When these officials do their contact investigation they are looking to identify individuals that may have been at the church during those days, and are asking those contacts to self monitor for signs and symptoms.

“Now, we are aware that there were over 100 folks that attended these meetings over that time period for the 10 days and so there’s a potential for widespread and that’s why we’re asking people to cooperate with us by getting tested,” Bagley said during the press conference.

“Please understand that we have diligently endeavored to follow State of New Hampshire and CDC Protocols. We implemented strict social distancing, physically removing more than half the seats in our facility. We screened our attendees for fever, provided hand sanitizer, required masks when proceeding to or from seats, and posted advisory signs. Each and every seat, handrail, and door knob in our facility was sprayed with disinfectant before and after each meeting. If these infections did occur in our facility, they did so notwithstanding the careful work of our staff, whose efforts likely mitigated even further spread of the infection.”

This recent outbreak comes soon after a similar situation occurred within Nashua City Hall where six positive cases were identified, including Mayor Jim Donchess. Bagley also said on Friday that the case involving the city hall outbreak was closed last week. She explained that city hall ended up closing for 14 days which gave an opportunity for people to be distanced, and so there was no further spread of cases in that scenario. Bagley said all six cases involved individuals who experienced mild cases and that there were no hospitalizations as a result of the city hall outbreak as well.

“From September 25th – October 2nd, we have experienced a relatively steady trajectory without major increases or decreases in documented cases with consistent testing rates in Manchester,” Thomas stated via email.

She added that the next 14-day period will close on Oct. 16. In any event, things being done locally include mobile community testing, ongoing contact tracing and surveillance and data analytics to name a few. Additionally, Thomas cited that the city activated their Emergency Operations Center and Stood up an alternative care site based on surge needs.

Thomas believes it would have been helpful to have included the technical expertise of both Manchester and Nashua’s health departments in the creation of statewide reopening guidelines and metrics.

Asked whether there have been any outbreaks in Manchester similar to what is happening at Gate City Church in Nashua, Thomas stated, “Not yet – but we will not be surprised if this happens in the future.”

These articles are being shared by partners in The Granite State News Collaborative. For more information visit collaborativenh.org.