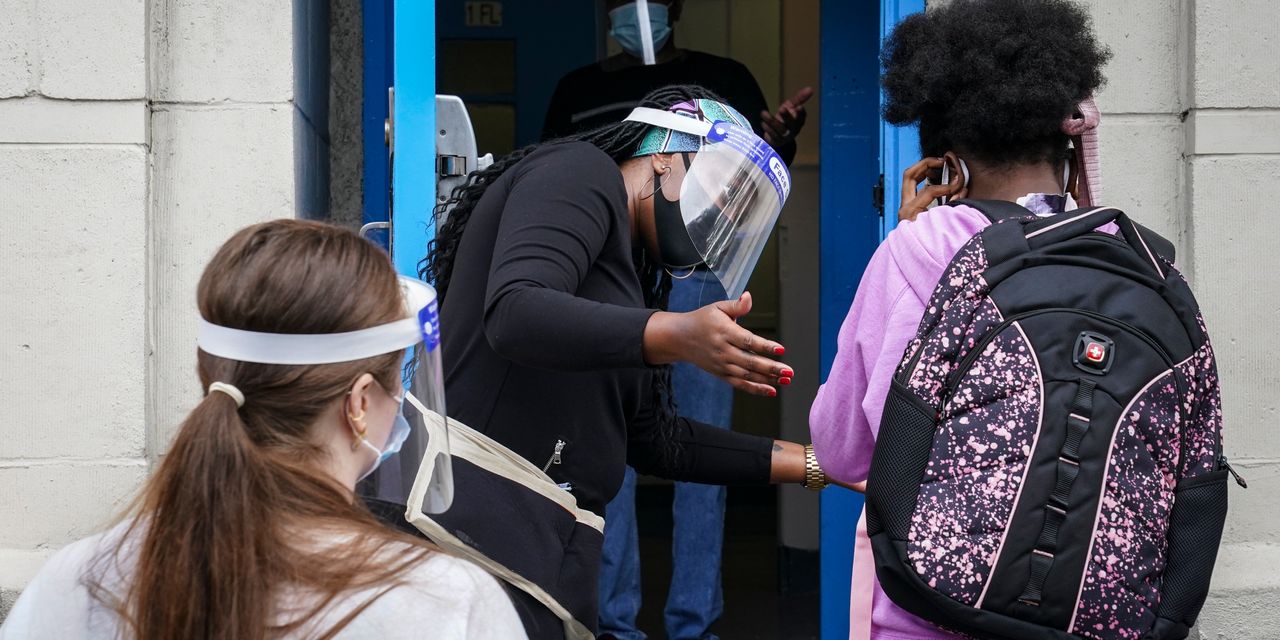 Students in hundreds of New York City middle and high schools start in-person classes Thursday, as the system gears up for its first effort at random testing for the new coronavirus.

In the third—and if all goes well—final phase of school reopenings for the nation’s largest district, roughly 1,600 traditional public schools will be open Thursday. On Tuesday, about 870 schools welcomed children in elementary grades, including schools serving children in kindergarten through fifth grade and K-8. Preschool and some special-education students returned to school last week.

“A really extraordinary number of schools will be open and ready to serve, and they’re doing it the right way,” Mayor Bill de Blasio said at a press briefing Wednesday. He said virus testing in schools will start next week.

The mayor has pushed to be one of the few major districts nationwide to offer in-person classes, despite resistance from many teachers and parents concerned that gathering large numbers of people in aging buildings might spread the coronavirus.

About half of the district’s one million students have chosen to study online full time, by city data. Many teachers have gotten permission to teach from home because they have medical conditions or live with someone who does.

The mayor has said schools will close if the share of people tested in New York City who are positive for Covid-19 hits 3% on a seven-day rolling average, and his administration was boosting testing and enforcement of mask wearing and other safety rules in areas seeing increases.

The daily share of people tested in New York City who were positive for Covid-19 hit 3.25% for the first time since June, Mr. de Blasio said Tuesday, just as most public schools began reopening. Despite the uptick, on Wednesday the mayor reported a positivity rate of 1.46% on a seven-day rolling average.

The in-school testing is a result of a deal the city negotiated in September with the teachers union to avert a strike vote. As part of a reopening deal with the union, City Hall promised random monthly testing of 10% to 20% of students and staff showing up in person at each school.

In correspondence with families, the city described its virus-surveillance program as free, quick and painless.

The city Department of Education asked parents this week to sign consent forms for testing. It said consent isn’t mandatory, but students who don’t have consent forms on file might be required to learn remotely if a school has too few permissions.

City officials said the test isn’t a long swab, but a short, small one that only goes in the nostril. “We are focused on making this a brief and gentle experience for our students, led by trained testers,” the department told parents in a letter, adding families will typically get results within 48 to 72 hours.

Testing providers include Fulgent Genetics, SOMOS and BioReference Laboratories, the city said. Once a month, a provider will visit a school with a randomly selected list of students and staff to be tested that day. Staff from the school or the testing team will visit classrooms to retrieve students, escort them to a testing area and return them to class within 15 or 30 minutes, the city said. Some older students may be able to conduct the tests themselves, under supervision.

Parents will be able to log into an online portal to get results, and if their child tests positive, they will get a phone call with further instructions. The department said overall results of testing will be shared with the school community but without the names of anyone who tested positive, to protect privacy.