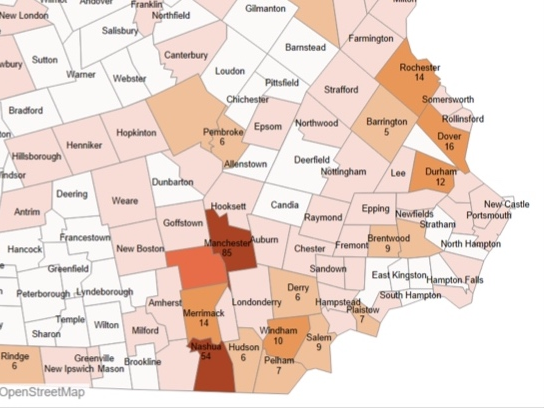 Part of the reason for the jump, the most cases since May 28 when 104 cases were reported, was due to a few factors, according to Lori Shibinette, the commissioner of the New Hampshire Department of Health and Human Services. As she said at Thursday’s weekly news conference, 22 PCR tests were delayed from one laboratory. Another 19 antigen tests — tests that were not previously included in reporting data, were also included. Those tests, Shibinette said Thursday, were listed as “probable” positives and since that time, PCR tests have proven that those people were infected.

Shibinette said, from this point forward, health officials would consider antigen positives as pure positives. About 400,000 antigen tests will be used between now and the end of the year at schools, nursing homes, and other places were rapid test results are needed.

Of the 99 cases, 60 were female and 16 were children. Thirty-five live in Manchester while 23 reside in Hillsborough County outside of Manchester and Nashua, 16 live in Nashua, nine live in Rockingham County, and three live in Merrimack County.

There are currently more than 8,500 accumulative cases in the state with 7,636 recoveries — or 89 percent of all cases.

“Of those with complete risk information, most of the cases have either had close contact with a person with a confirmed COVID-19 diagnosis, have recently traveled, or were associated with an outbreak setting,” the state said.

Two new COVID-19 outbreak settings were also reported by the state on Friday.

Bedford Hills Center Genesis, which had a previous outbreak that closed in mid-July after seven deaths, has another outbreak with 33 residents and 15 staffers testing positive and two more deaths.

Also, the Warde Health Center Windham has three residents and one staffer infected.

Colleges and universities also reported a number of new cases including Lakes Region Community College with one case, six new cases at Saint Anselm College to go with six recovered cases, and 32 active cases at UNH in Durham.

Stop The Spread Of COVID-19

The COVID-19 virus is spread through respiratory droplets, usually through coughing and sneezing, and exposure to others who are sick or might be showing symptoms.

Take the same precautions as you would if you were sick:

More information from the New Hampshire Department of Health and Human Services about coronavirus can be found here on the department’s website.

Got a news tip? Send it to [email protected] View videos on Tony Schinella’s YouTube channel.