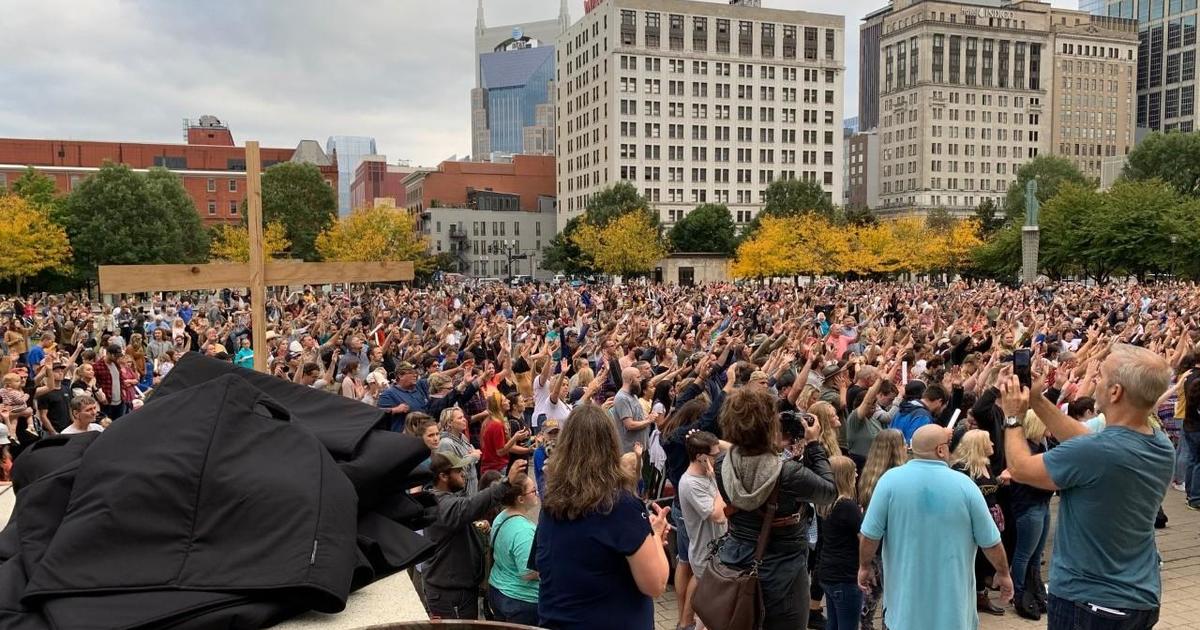 Nashville officials are investigating a worship event outside the historic courthouse Sunday that packed together a big, largely unmasked crowd, despite rising new case counts of COVID-19 in Tennessee. The Nashville Health Department says “appropriate penalties” will be pursued against the organizer, saying that person didn’t submit an application to health officials or permit application to any Nashville department.

“We have worked very hard to slow the spread of COVID by taking a measured approach to protect the community,” health department spokesperson Brian Todd said in Monday’s statement. “The Health Department is very concerned by the actions that took place at the event and we are investigating and will pursue appropriate penalties against the organizer.”

Event leader Sean Feucht posted videos of the gathering on social media, calling it a protest. The videos show several hundred people gathering in front of a stage.

Feucht has been associated with similar gatherings elsewhere.

“We had THREE venue changes and so much resistance BUT THE CHURCH WILL NOT BE SILENCED!” Feucht tweeted Sunday about the Nashville event.

Nashville is limiting gatherings without city approval to 25 people. Approved events can occur at 30% capacity, with 500 people maximum and masks required.

Interim Nashville Police Chief John Drake said the organizers did not have any advance communication with his department, which was not present at the event. He said he was “greatly disappointed” that organizers and attendees “did not better prioritize their health and the health of others through social distancing and the wearing of face coverings.”

“Going forward, the police department will work with its Metro government partners, including the Health Department, to more effectively facilitate proactive contact with any future event organizers to explain Nashville’s public health and safety expectations,” Drake said in a statement.

“When we see pictures from large groups not wearing face masks, being crowded together, and singing or shouting, that really isn’t prudent right now, and is contributing to this pandemic,” Dr. Aronoff said.

Tennessee’s seven-day rolling average of daily new cases has risen over the past two weeks from 1,354 on September 27 to 1,929 as of Sunday. The state reported more than 2,900 new cases on Monday.

Additionally, the seven-day rolling average of daily deaths in the state has risen from 22.71 on September 27 to 27.14 one week later.

The action notably did not apply to Tennessee’s six populous counties with locally run health departments, including Nashville.

Additionally, Lee did continue allowing all counties to decide whether to implement their own mask mandates.

Mayor dies after battle with coronavirus

Meanwhile, the mayor of a Tennessee city died early Monday after being hospitalized for 11 days with COVID-19.

Manchester Mayor Lonnie Norman, who was reelected to his third term in August, put up “a valiant fight against COVID-19,” the city said in a Facebook post.

His family in a statement on Monday recalled Norman’s accomplishments in office: A new recreation complex, soccer field, improvements to numerous parks, other infrastructure, support for the Bonnaroo Music and Arts Festival, which takes place in Manchester, and the fight against rural hospital closures.

His family also shared a message for other officials and the public at large.

“COVID-19 is a real and it took our beloved Lonnie Norman from us,” his family said in a statement. “To his fellow public officials, we say please remember your duty to keep the public safe. To our fellow citizens, we say please wear a mask, practice physical distancing, and protect public health and each other.”

The city’s board of mayor and aldermen said Norman was “a statesman and a diplomat, but above all else, he was kind, honest, and thoughtful.”

“In a world that seems to so easily divided, Mayor Norman brought us together,” the board said in its statement. “Mayor Norman understood the importance of compromise and honest debate.”

Vice Mayor Marilyn Howard has taken over his duties.