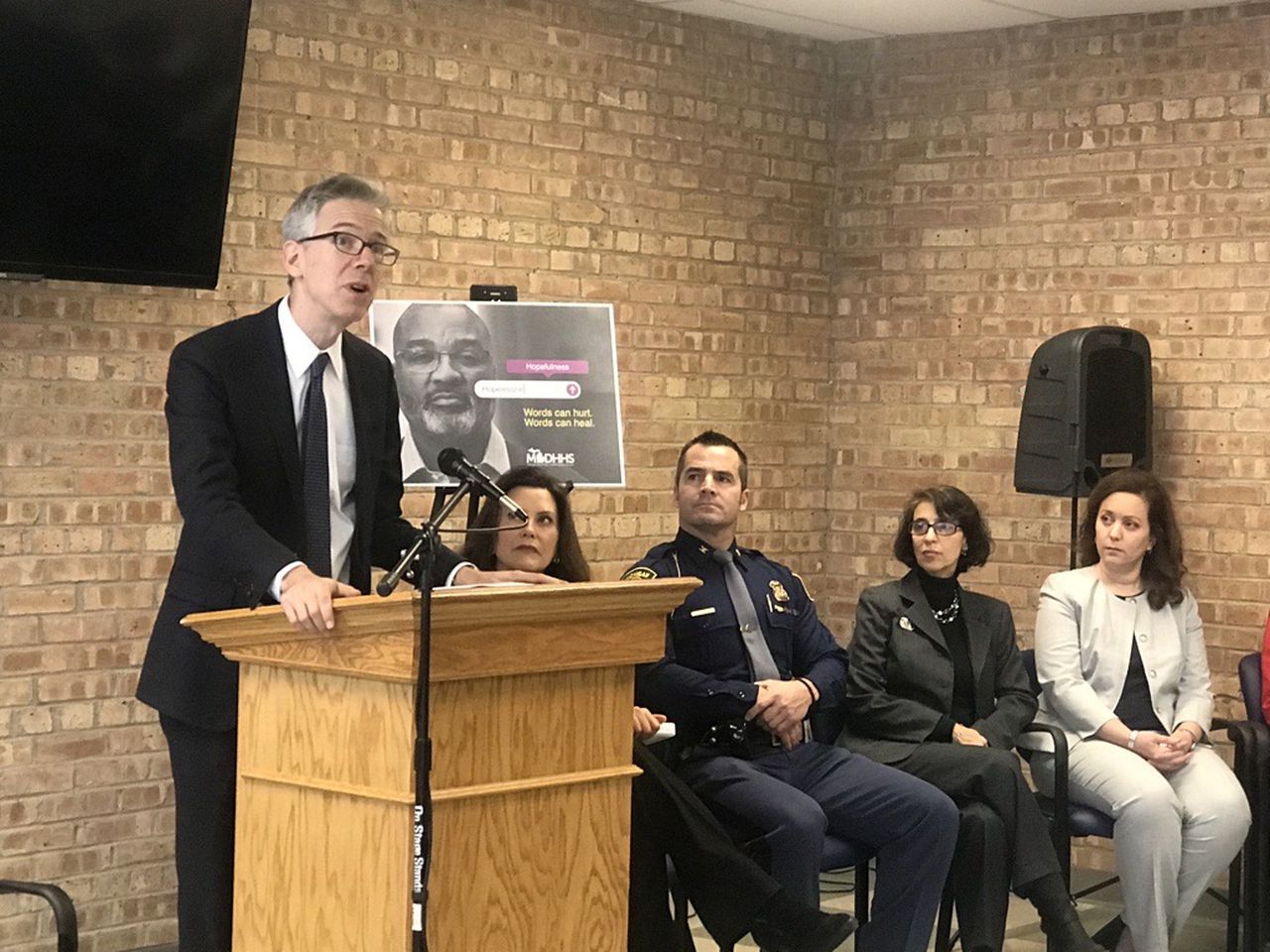 A new state department is taking the reins when it comes to the rules people in Michigan have to follow during the global COVID-19 pandemic.

Until this past week, the Michigan Department of Health and Human Services (MDHHS) had taken a back seat when it came to issuing orders aimed at curbing the spread of COVID-19.

Instead, Gov. Gretchen Whitmer’s administration relied heavily on two state statutes that gave the governor broad power to issue executive orders under the looming threat of the emergency that is a global pandemic. The 1976 Emergency Management Act and/or the 1945 Emergency Powers of the Governor Act were the basis for a wide swath of orders issued by Whitmer, including requiring masks in public spaces, limits on crowd sizes, and requiring various establishments like movie theaters and gyms to stay closed for months.

“She had the broadest authority, and had authorities that we did not have,” said Robert Gordon, director of MDHHS.

But that broad authority took a blow on Oct. 2, when the Michigan Supreme Court ruled that Whitmer’s executive orders were either issued after they should have been or based on a law that it deemed unconstitutional.

“I thought it was terrible,” Gordon said. “It eliminates rules that have saved thousands of lives.”

Now Whitmer’s administration is working overtime to look for avenues to reinstate rules, and many of those will likely come through MDHHS, putting the department and director Gordon at center stage of the pandemic in Michigan.

The man behind the scenes

“Dr. Khaldun is a public health expert, she’s a physician, she’s the governor’s chief medical executive, so she has a unique role…in leading our public health response,” Gordon said. “My background is different.”

That background, most recently was as senior vice president of finance and global strategy for College Board for almost four years. College Board oversees the SAT and the Advancement Placement program. He also worked under President Barack Obama in several roles. He was acting deputy director at the U.S. Office of Management and Budget and acting assistant secretary for Planning, Evaluation, and Policy Development at the U.S. Department of Education.

“Robert has been described as the quarterback for the Obama Administration’s evidence-based policymaking initiatives, which closely tied program funding to quality evaluation,” said a press release from Whitmer’s office when Gordon’s appointment was announced.

While Khaldun has spoken at nearly every press conference the governor has given on the subject of the coronavirus, Gordon has worked behind the scenes shaping policy. Gordon has appeared in front of Legislative committees, sometimes to defend policies and other times to apologize.

In August, Gordon testified during a two-hour meeting of the Joint Select Committee on the COVID-19 Pandemic. The department had been under fire for signing a contract with Great Lakes Community Engagement and Every Action VAN to conduct contract tracing. The contract was criticized when it was discovered Every Action VAN works with Democratic and progressive political campaigns.

“Engaging with this vendor was a mistake,” Gordon told the committee, “not because they couldn’t carry out the mission, but because the political leanings would distract from the issue.”

Gordon was also called to the carpet to defend the state’s handling of nursing homes during the pandemic. He told the same committee that Whitmer’s orders saved lives, including in the state’s nursing homes.

But Republican members of the committee were not impressed. They criticized the state’s strategy of using hubs to set up isolated wings for COVID-19 patients in clinics, nursing homes and long-term care facilities to deal with capacity issues. They also accused MDHHS and Gordon of not cooperating with email and data requests made by the oversight committee.

“We have asked for many months that you and your department turn over emails and communications related to nursing homes,” Committee Chair Rep. Matt Hall, R-Marshall said. “So I’m interested in when are you going to turn them over? Or do we have to issue a subpoena?”

“We’ve provided many, many emails to you,” Gordon said.

The exchange grew even more heated with Gordon telling Hall, “We have been extremely busy on protecting people and saving lives… You will forgive me if in our focus on actually protecting the well-being of people, we are not able to meet your requests with the haste you would like.”

Now Gordon has to take a more public role, which doesn’t necessarily coincide with his personality.

“Robert doesn’t want to assert himself. It’s not like he’s the big guy in charge,” said David Coleman, CEO of College Board. Coleman worked with Gordon during his time at The College Board, and said he’s known Gordon for more than a decade.

Coleman said Gordon has a history of putting a focus on “those who have less” and making government systems easier for regular people. But more than that, in these times, Coleman said Gordon is someone who just wants people to follow the science – and put on a mask.

“He wants to do the opposite of fight, I think,” Coleman said. “In other words, he doesn’t want to be portrayed as a hero fighting anyone. He wants to share an uncontroversial true statement. That’s where he’s happiest.”

On Oct. 5, MDHHS announced that it would be issuing orders to replace, or mostly replace, a number of Whitmer’s previous orders.

Those emergency public health orders have since included requiring masks be worn at social gatherings, with two or more people that are from multiple households. Businesses and government offices are also required to enforce the requirements for gatherings on their premises.

MDHHS also issued mask requirements for people participating in organized sports and in schools in all regions except Traverse City. The orders include limitations on gatherings that mirrored what Gov. Whitmer had previously issued – like limiting indoor venues to 500 people or 20% of the venue’s capacity, in most of the state.

The department cited MCL 333.2221 in its order stating, “Michigan law imposes on MDHHS a duty to continually and diligently endeavor to ‘prevent disease, prolong life, and promote public health,’ and gives the Department ‘general supervision of the interests of health and life of people of this state.’”

This isn’t the first time the department has issued orders during the pandemic, and it has also been sued for doing so.

On Aug. 3, the department issued an order requiring farm employers test their employees and seasonal workers for COVID-19. A group of farm employees and employers sued the state calling the order discriminatory and racist. A federal judge denied a request by the group for a restraining order to prevent the state from enforcing the emergency order.

But by and large, the orders surrounding the state’s handling of COVID-19 have come from the governor’s office. Now the department has to change gears.

“She had the broadest authority, and had authorities that we did not have,” said Gordon. Which means that there are some orders that Whitmer issued which MDHHS won’t be able to replicate, like the steps to expand unemployment insurance. Instead, MDHHS’s authority is more limited to things like testing and public safety.

“Right now, our focus is on putting back into place, under MDHHS authorities, as many of the governor’s orders as we are able and as we think necessary,” Gordon said.

Those orders are set to end on Oct. 30, and in the meantime Gordon said the department wants to collect feedback and public comment before either lengthening the orders or changing the orders. It will also allow the department to see how things have changed with the virus.

“Unfortunately, I think things will get worse before they get better,” Gordon said. “Cases are creeping upward and we need to be ready to respond.”

That’s despite knowing it’s possible, maybe even likely, that MDHHS’s orders will see similar lawsuits and similar pushback from the Republican controlled Legislature. Gordon, however, is undeterred.

“We are acting under, under authorities that the Legislature created. I understand that they may or may not like that, but that is where we are…Everything we are doing is pursuant to a grant of authority by the Michigan Legislature.”

The lasting impact of COVID-19

COVID-19 altered MDHHS’s goals and will result in changes to the department for years to come, Gordon said.

While the department’s prior goals of simplifying access to benefits like food and energy assistance have become even more urgent, Gordon said, some other plans have had to take a back seat to dealing with the virus.

Before the pandemic, MDHHS had been working with stakeholders on a plan to integrate behavioral and physical health services and integrating the way they they are insured in Michigan. The concept was announced last fall, but has since been delayed.

Aside from having to pick up set aside projects, the impact of coronavirus will be felt by the department long after a vaccine has been distributed.

The coronavirus has led to an opportunity for telehealth, Gordon said, and the state will likely see changes in how it delivers healthcare services. He said it’s a way to help people and “meet them where they are, quite literally.”

But the virus also showed what needs to change at MDHHS and in the state, he said.

“I think COVID has shined a bright and terrible light on racial disparity and the way that racism has cost lives, and cost lives every day,” he said.

Structurally, MDHHS is establishing a new office to focus on racial disparities in healthcare. COVID-19 hit Black communities hardest, especially during the early days of the pandemic. Gordon said there were a lot of reasons – poverty, crowded housing, lesser access to healthcare, preexisting conditions, and the list goes on. And Gordon said the department will address these social disparities with a renewed focus.

“It just has to play a larger role in the way we do our work moving forward,” Gordon said.