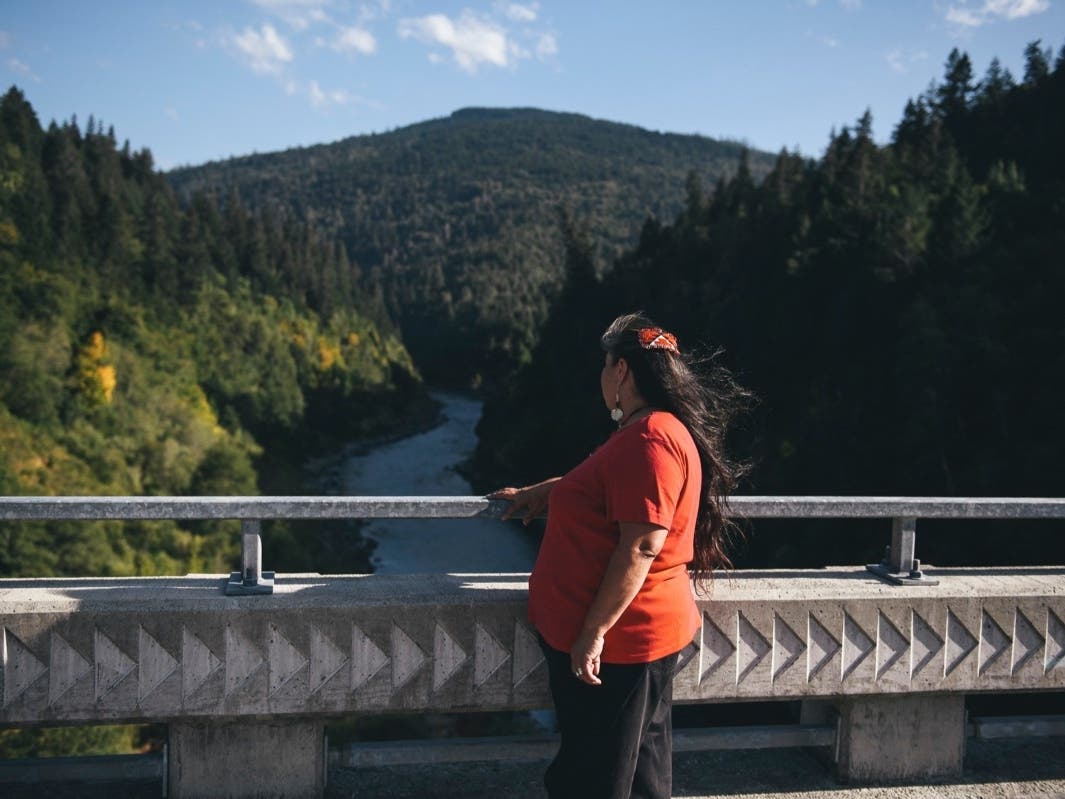 Humboldt County, tucked into the redwoods on the state’s far North Coast, also has a much higher suicide rate than most of California. The pandemic has fueled new concerns.

Celinda Gonzales has a long list of worries: She worries about COVID-19, which recently spiked near the Yurok reservation where she lives in Humboldt County. She worries about the wildfires threatening her remote, forested town, Weitchpec.

She worries about gill rot and algae blooms in the Klamath and Trinity rivers, which join together just over the hill from her trailer; she worries, too, about what the resulting small salmon runs mean for her financially struggling community.

And she worries about the prospect of more suicides.
“It’s very hard to stay mentally strong right now,” she said.

For several years, Gonzales, 53, has worked in suicide prevention in the northwestern corner of California, famous for its rocky coastlines and breathtaking forests. It carries the burden of another reputation – That weight is felt across this county of 135,000, as well as in many neighboring rural counties, where mental health providers are in short supply.

Now, in this region and across the state, the pressures of the pandemic and economic downturn, compounded by racial tensions and climate-change-fueled megafires, are amplifying that concern.

Gun sales are up nationally, including in California, according to a recent FBI report on firearm background checks. Experts worry substance use here may also be increasing. Individually, these factors are stressors; together, they’re a powder keg.

“We are very concerned about the layering of multiple stresses on the people of California,” said Jim Kooler, assistant deputy director of the state Department of Health Care Services’ behavioral health division. He describes the current moment as having “challenges on top of challenges that we’ve never had to face before.”

Adding to these challenges: The state has a decentralized public mental health system, which can make a concerted statewide effort to address suicide even more challenging.

A bill to create a statewide Office of Suicide Prevention was signed into law last Friday by Gov. Gavin Newsom. But there was a big caveat: At this point, there’s no money for it.

Meanwhile, pressure is building. Mental health leaders in the state are now commonly defaulting to the word “tsunami” to describe a predicted onslaught of mental health needs and suicides, which many believe will last long after any vaccine is distributed.

Historical precedent amplifies this sense of urgency. In the years following the last recession, an estimated 4,750 more Americans than projected died by suicide, according to an analysis published in The Lancet.

Nationally, rates of anxiety have already tripled and rates of depression have quadrupled compared to a year ago, according to a report by the Centers for Disease Control and Prevention. One especially sobering finding: More than a quarter of the nation’s 18- to 24-year-olds reported seriously considering suicide in the last 30 days.

Monthly calls to a suicide prevention crisis hotline run by Sacramento-based WellSpace Health, which serves much of the state, almost doubled this year compared to a year earlier — up from a little more than 3,000 for June 2019 to almost 6,000 in June 2020.

One of the main words he said they hear from callers: “hopeless.”

Humboldt’s high suicide rate can be traced to a combination of factors: gun ownership, low median incomes and the precipitous decline of work in the logging, construction, fisheries and manufacturing sectors, mental health leaders there say. Heavy opioid and prescription drug use is also a key element — the county’s overdose death rate is often more than triple the statewide average, according to a county report, and is especially high in the Native American community.

For Native American residents like Celinda Gonzales, who make up more than 6% of the county’s population, historical and ongoing trauma and suffering are also significant, said Virgil Moorehead, a clinical psychologist and executive director of Two Feathers Native American Family Services.

“I don’t want to frame it as a mental illness,” he said. “I would frame it more as existential despair.”

Access to mental health services in Humboldt County is a problem, too, said Dr. Robert Soper, who heads a countywide behavioral health consortium he started five years ago. Soper, 71, said he is the only private psychiatrist left in the county. For years there were five, he said, but as his colleagues retired, no one replaced them. Being so remote from major cities makes it difficult to recruit, he said.

“If I could find someone good, I would have them in a heartbeat,” he said. “They would be full before they walked in the door.”

In its investigation, the grand jury found the county’s behavioral health board had done little to improve those conditions.

The county’s behavioral health director, Emi Botzler-Rodgers, told CalMatters her office has been “working diligently to change our branch culture” and improve staff morale. And Soper notes another important development: the county now has a mobile crisis team that can quickly evaluate people.

Two years ago, health officials in Eureka, the county seat, decided to make a concerted effort to address the county’s high suicide rate.

We want to hear from you

Want to submit a guest commentary or reaction to an article we wrote? You can find our submission guidelines here. Please contact Gary Reed with any commentary questions: [email protected], (916) 234-3081.