Back in early June, shortly after announcing plans to join the Ragin’ Cajuns as a graduate transfer, former Arizona State offensive lineman Zach Robertson addressed why he left the Power 5 program and sat out what would have been his 2019 redshirt senior season.

Details were scarce, but Robertson – who started multiple games for the Pac-12’s Sun Devils, including nine in 2018 – was candid.

“I was just battling a lot of things that were going on … and it took a huge toll on my mental health,” he told The Daily Advertiser then. “I didn’t know how to cope with it so I decided to step away from football for a year and get my mind back right.”

Last week, Robertson – now the 3-0 Cajuns’ starting left tackle – revealed much more and, in the process, made a plea for college football players facing circumstances similar to his own to keep mental health atop their priority list.

Snyder nails game-winner for UL: ‘I knew it was good’ 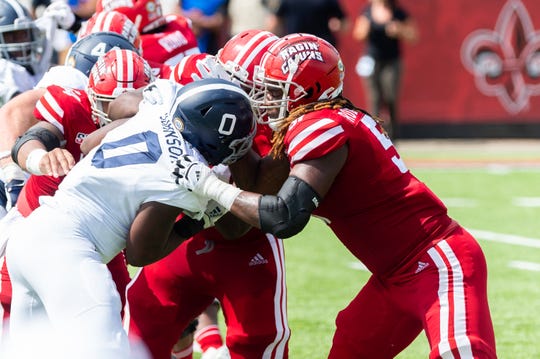 “Both of those things, you know, I mean … the way I was raised, it wasn’t an emphasis to make sure those things are OK, your mental health is OK.

“So, it got to the point where it overwhelmed me and I made wrong decisions and I faced the consequences,” he added. “I had to sit out. I basically didn’t know if I was ever going to play football again. And those two things scared the hell out of me.”

It was on the first day of August 2019 that Arizona State coach Herm Edwards, the former NFL head coach then in his second season on the job in Tempe, explained why Robertson wasn’t around for the start of preseason camp.

“Yeah, he’s got some personal matters he’s dealing with,” Edwards told reporters covering the team then, according to 247Sports.com. “Whenever he’s ready to come back we’ll find a way to get him back but right now he could be out for a while.”

Robertson – highly hyped coming out of one of the nation’s top high school football programs, Saint John Bosco High in Bellflower, California – never did play another game for the Sun Devils, capping his total at 31 from 2016-18.

Bachelor’s degree already in hand, he needed a fresh start.

His decision to leave the team ended a four-year stay that evidently included its share of ups-and-downs, ending with him missing Arizona State’s 2018 Las Vegas Bowl loss to Fresno State because of what was widely reported to be a back injury sustained in practice prior to the game.

“For Robertson,” Chris Karpman of 247’s Sun Devil Source wrote when Robertson was absent for the start of camp in 2019, “this is another in a string of undesirable starts to either spring ball or preseason camp.

“He didn’t play in (the 2018) season’s opener due to a knee injury and drew the ire of coaches in the spring of 2018. He also missed some action at the outset of the 2017 season for team rules violations.”

A year and several weeks later, Robertson readily admits there were – again, speaking mostly in generalities – some missteps.

But he’s also man enough to own up to whatever mistakes were made, and to understand it’s OK to seek out ways to tackle whatever issues he had.

“Even here, at UL, I make sure I talk to somebody, talk to a counselor, somebody that’s gonna keep me grounded. And I think I’m in the best position right now; the best shape, in terms of mental health.”

More: So much so different when UL returned to Cajun Field

Though he has no geographic ties, Robertson’s migration to Louisiana makes sense.

Robertson had other options for playing in 2020, but said they “were kind of (blown) off the table because of the fact I knew Sale and I knew Coach Napier and I knew the system a little bit more.”

“It made it so much more easier,” he said of the transition, “and it gave me the ability to work … on my body, since I was out for a year-and-a-half, and work on getting my steps down, just things like that, the little stuff.”

When Robertson finally made his way to UL, all sorts of adjustments had to be made.

It didn’t help that he arrived amid the coronavirus (COVID-19) pandemic responsible for, according John Hopkins University statistics, nearly 1 million deaths worldwide and more than 205,000 in the United States alone.

“I knew it was gonna be a quick turnaround; you know, we had about two-and-half, three months to really get ready and be able to get everything set. So it definitely put an exclamation mark on my preparation.”

Then there was the fact that when Robertson arrived he knew little about the Sun Belt Conference, UL’s league. 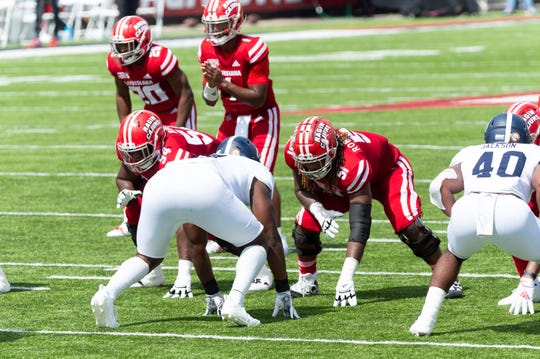 Besides Sale and Napier, he didn’t know the coaches well.

And he barely knew the other members of his new offensive line, let alone the rest of the team.

“Coming from Arizona State, I knew who our opponents were. I knew who our guys were; I had played with them for multiple seasons,” Robertson said. “Coming over here, there were people every single day that I was literally like, ‘Who?’”

In the locker room, he had to learn – and recall – names on the fly.

On the practice field, it was just as challenging.

“I knew that with the time that I’d been out, there was a lot of things I had to wrap my head around – the speed of the game, things like that, that when you’re playing for years and years constantly, you don’t think about,” Robertson said.

“I definitely had to ‘shock’ myself back into football, and once I felt how it felt to play at a high level again it felt really good.”

More: True freshmen getting it done for the 3-0 Ragin’ Cajuns

When UL’s Sept. 12 season-opener at then-No. 25 Iowa State rolled around, he was in the starting lineup.

“I would definitely say it took me about a quarter to really be like, ‘Man, I’m here,’ ” Robertson said. “A year ago when I sitting at home and not doing much, it seemed so far away.

“So, that first game it was too long overdue. So I had to get those jitters out, I had to get that play speed back … and then the intangible things that come with playing offensive line.”

But the Cajuns wound up beating the Cyclones 31-14 and quickly found themselves nationally ranked – No. 21 in the Amway Coaches Poll, No. 19 in the AP Top 25.

More: What we learned from No. 21 Cajuns’ OT win at Georgia State

By the time UL returned home one week later from an overtime win at Georgia State, Napier could rest comfortably knowing he had the Robertson he remembered from Arizona State.

“He’s got a lot of height and length. He’s a good athlete. I think he does his job, right?” the Cajuns coach said. “I think physically he’s capable of playing with power.

“I think he’s got enough other athletic ability to win on the back side and win on the front side of a stretch play, then he’s done a good job in protection.”

Napier, whose Cajuns are off until visiting Appalachian State for an ESPN-televised game on Oct. 7, likes the progress he’s seen from the 6-foot-6, 297-pounder.

“We felt he played much better in the second game. … I certainly think his best football is in front of him,” he said last week.

“I think we’ve got to understand,” Napier added, “that he did take a year off from football and he didn’t have a typical offseason, given the pandemic and … the fact he didn’t arrive until June.”

NO ‘BEATING AROUND THE BUSH’

What’s happened in 2020 – for the Cajuns, for the country – really has been a lot to handle, for everyone.

The COVID-19 issues that have many wearing masks and most practicing social distancing caused 13 Cajuns including seven starters to miss UL’s victory, a nail-biter over Georgia Southern won only after Nate Snyder hit a 53-yard field goal as time expired?

The sudden death of UL offensive line assistant coach D.J. Looney, who had a heart attack during mini-camp, before Robertson got to play even one game under him?

Issues of social injustice that have prompted protests – including some in Lafayette, one of them organized by UL football players – and rioting from coast from coast?

How has Robertson coped with so much stress?

Related: ‘I can’t help but think my man D.J. is up there smiling’

“I would say it’s for sure made it harder on all of us,” he said.

“We’re in an age of we’re on our phone 24-7, so we see all the injustice, we see every single piece of what’s going on in the outside world. But when we come (to UL’s practice facility) we have to kind of shut our minds off, and it’s kind of a one-track-mind in terms of football.

“So we’ve taken time, and our coaches have done a great job with that, to be like, ‘Let’s talk about this video we’ve seen on Twitter, let’s talk about these issues that are going on,’ so we’re not just sitting there kind of beating around the bush,” Robertson added. “Those types of things, it helps us grow. … Being able to talk about it, especially with our teammates, the guys we’re around all day, the guys we see the most, I think we’re more comfortable.”

He recommends it for everyone facing and feeling some of the same pressure he does.

“Our mental health is important,” Robertson said, “and without any type of stability it’s going to be hard to think about football, school, women, all those things that come with that.”

More: Made in Detroit, Ragin’ Cajuns linebacker McCaskill is geared to go

More: Cajuns QB Lewis gets it

More: Receiver Peter LeBlanc has lots to draw from in second year as a Cajun

That’s why Robertson has become an advocate who preaches that anyone in need, including his new teammates, should seek out help that’s readily available.

And there’s plenty of it.

The Cajuns’ approach for addressing potential mental health needs for all student-athletes, UL assistant athletic director for communications Patrick Crawford said, is to make them aware at the beginning of each school year, and to remind throughout their seasons, that they can “bring concerns of their own to the team athletic trainers, who then bring in independent contracted counselors, depending on the subject matter.”

No one, Robertson feels, should let macho-ism or perceived stigma get in the way of receiving whatever help they need.

Seek out a counselor, Robertson suggests, or, he said, simply “somebody that you trust and that you can talk to and they’ll lead you right when you’re down.”

“I do think there’s a lot of guys – not on our team specifically, but in general – in our position, and how old we are, with how much burden we have to shoulder,” Robertson said, “(who) definitely have to talk to somebody.”

Lift your spirits and take a look at UL’s athletic fields as seen from the air through footage from Lafayette photography and videography company Viznu.