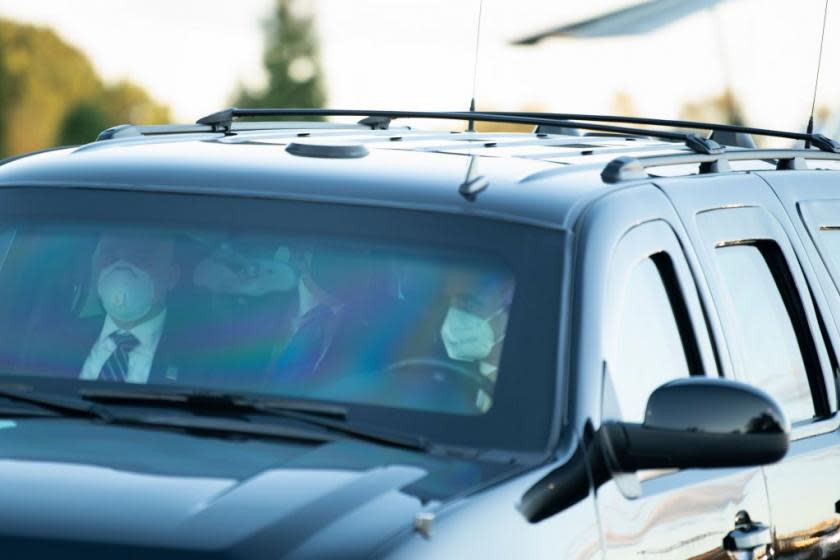 After teasing a “little surprise visit” via video on Twitter, President Trump left the hospital on Sunday afternoon to wave to supporters from the back seat of an SUV. “It’s been a very interesting journey. I learned a lot about COVID,” Trump, who is still suffering from the coronavirus, said in the video. “I learned it by really going to school, this is the real school, this isn’t the ‘let’s read the book’ school, and I get it, and I understand it,” he added. Then, contradicting his own words and the advice of the Centers for Disease Control and Prevention, the president left Walter Reed National Military Medical Center’s presidential suite to wave to supporters from a car—a decision that forced at least two Secret Service agents to don personal protective equipment as they shared the same air and enclosed space of the vehicle. The CDC website explicitly states that if a person is sick with COVID-19, they should stay at home except to get medical care. The CDC’s language is more forceful in its guidelines for health-care workers. “In general, transport and movement of a patient with suspected or confirmed SARS-CoV-2 infection outside of their room should be limited to medically essential purposes,” its FAQ page reads. > “God bless our president, I will die for him.” > > Trump pulls a surprise drive-by visit with supporters outside Walter Reed Medical Center pic.twitter.com/EfUMDRgFVO> > — Bloomberg QuickTake (@QuickTake) October 4, 2020White House spokesman Judd Deere defended the stunt. “Appropriate precautions were taken in the execution of this movement to protect the President and all those supporting it, including PPE. The movement was cleared by the medical team as safe to do,” he told The Daily Beast.But medical experts questioned the wisdom of the outing.“In general, if someone is ill enough [with the coronavirus] that they need to be in the hospital for observation, it’s probably not wise to send them out on [non-essential care] trips,” Dr. Timothy Brewer, an epidemiologist at the UCLA School of Public Health and former adviser to the WHO, NIH, and CDC, told The Daily Beast. “The primary focus for any patient who’s sick enough to be in the hospital from COVID-19 should be recovering.”As for the possibility of the president transmitting the virus to the agents in his vehicle, Brewer said, “Being inside a vehicle means you’re going to be close together even if you have all the windows open. You’re essentially in an indoor environment even if you have an air conditioning or ventilation.”Dr. Irwin Redlener, a Columbia University expert on pandemic readiness who has written for The Daily Beast, said it was an awful spectacle.“If I was his physician, I would not have approved of that. If I were the Secret Service agents’ physicians, I wouldn’t have approved of that either,” he said.“The president and his entourage have been creating, almost daily, potentially superspreader events,” Redlener added. “It’s really distressing and a terrible role model for the country.”Via Twitter, Dr. James P. Phillips, an attending physician at Walter Reed, said the president’s choice of conveyance presented its own problems.“That presidential SUV is not only bulletproof, but hermetically sealed against chemical attack,” Phillips wrote. “The risk of COVID-19 transmission inside is as high as it gets outside of medical procedures. The irresponsibility is astounding.”Phillips wrote in an earlier tweet that the agents in the car would now need to be quarantined for 14 days after having been put at risk of severe illness or death “for political theater.”> Every single person in the vehicle during that completely unnecessary Presidential “drive-by” just now has to be quarantined for 14 days. They might get sick. They may die. For political theater. Commanded by Trump to put their lives at risk for theater. This is insanity.> > — Dr. James P. Phillips, MD (@DrPhillipsMD) October 4, 2020The joyride was the latest sign of how the White House has been trying to manage the optics of the president’s illness.Trump’s physician, Dr. Sean Conley, admitted on Sunday that he hid from the public how high the president’s fever got and the fact that he needed supplemental oxygen before being hospitalized because he wanted to present an “upbeat attitude.”After initially insisting that Friday’s trip to Walter Reed was purely precautionary, Conley disclosed on Sunday that it was, in fact, the combination of a spiking fever and the oxygen crisis that triggered the move.Read more at The Daily Beast.Get our top stories in your inbox every day. Sign up now!Daily Beast Membership: Beast Inside goes deeper on the stories that matter to you. Learn more.