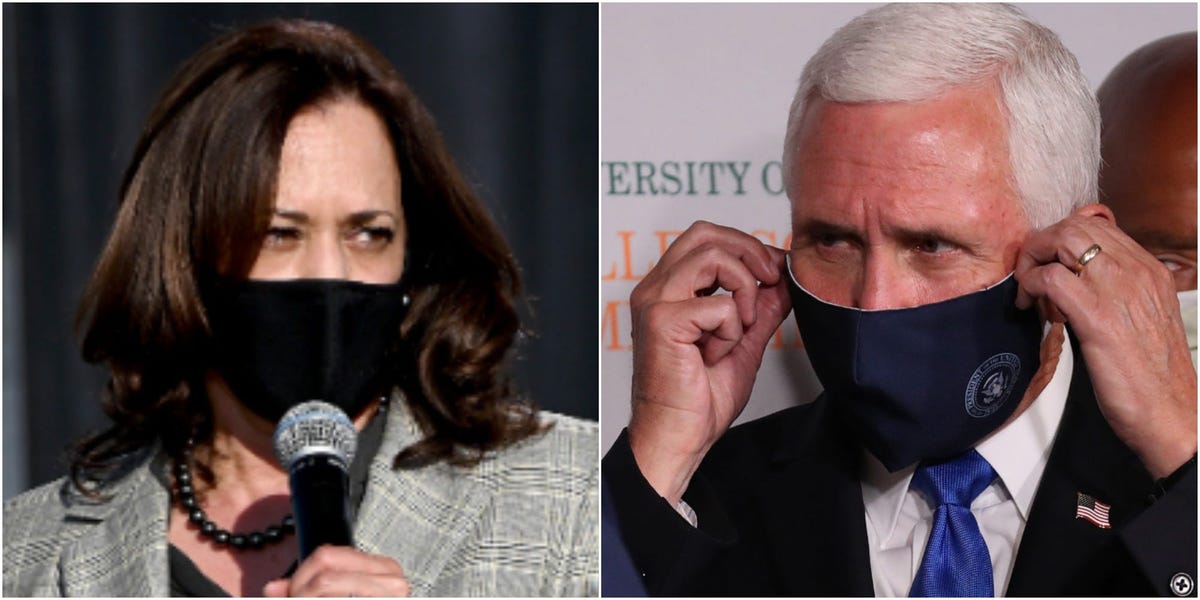 The debate comes as the Trump administration is mired in the most serious public health crisis of Donald Trump’s presidency: more than two dozen people in and around Trump’s orbit have tested positive for the novel coronavirus. That includes Trump and First Lady Melania Pence, multiple current and former Republican lawmakers, the White House press secretary, Trump’s counselor Hope Hicks, the head of the White House security office Crede Bailey, and others.

The second highest-ranking official in the Marine Corps and a senior Coast Guard admiral have also tested positive, and top military officials including the joint chiefs of staff have had to go into quarantine as a result.

Pence has tested negative as of Wednesday, but the Biden campaign insisted that debate staff erect a plexiglass wall between Harris and the vice president and keep them more than six feet apart as a precautionary measure.

Topics for Wednesday’s debate have not been released, but it will likely focus heavily on the Trump administration’s handling of the coronavirus pandemic, especially as cases, deaths, and hospitalization rates spike across the country during the flu season. USA Today’s Susan Page, who is moderating the debate, will also likely ask about key policies the two campaigns have put forward on issues like healthcare, the economy, the Supreme Court, and Trump and Biden’s respective governing records.

What they said: Pence said at the start of the debate that “from the very first day, President Donald Trump has put the health of Americans first” and that “he suspended all travel from China, the second largest economy in the world. Joe Biden opposed that position, he said it was xenophobic and hysterical.”

Fact check: Trump did not ban all travel from China. He restricted certain types of travel, and far from denigrating the president’s decision as xenophobic, Biden’s campaign expressed support for the move in April.

What they said: Pence accused the Biden campaign of drawing from the Trump administration’s COVID-19 policies, saying, “When you read the Biden plan it looks an awful lot what President Trump, the task force, and I have been doing. It looks a little bit like plagiarism, something Joe Biden knows a little bit about.”

Fact check: Pence was likely referring to the plagiarism controversy that doomed Biden’s 1988 presidential run. Specifically, as Insider previously reported, Biden lifted portions of a speech by United Kingdom Labour MP and Margaret Thatcher challenger Neil Kinnock. And according to a 1987 article in The New York Times, Biden acknowledged plagiarizing a law review journal for a paper during law school, and asked school administrators not to be expelled. Biden later said he made a mistake in the citation process.

What they said: Harris accused Trump of calling the COVID-19 pandemic a “hoax.”

Fact check: This was a misleading statement. Trump was not referring to the pandemic, specifically, as a hoax but rather to Democratic lawmakers’ criticisms of his administration’s handling of the virus.

“Now the Democrats are politicizing the coronavirus,” he said in February at a campaign rally. “You know that, right? Coronavirus. They’re politicizing it. We did one of the great jobs. You say, ‘How’s President Trump doing?’ They go, ‘Oh, not good, not good.’ They have no clue. They don’t have any clue. They tried anything, they tried it over and over, they’ve been doing it since you got in. It’s all turning, they lost, it’s all turning. Think of it. Think of it. And this is their new hoax.”

What they said: “We’re going to have a vaccine in less than a year, in unheard of time, we’re producing tens of millions of doses,” Pence said.

Fact check: Dr. Anthony Fauci, the US’s top infectious disease expert, told Reuters in an interview that pharmaceutical companies will likely have tens of millions of doses of a COVID-19 vaccine available by early 2021 and as many as a billion doses availabe by the end of that year.

He also told a Senate appropriations subcommittee hearing last month, Fauci said that by November, “you’ll probably be maybe 50 million doses available. By December maybe another 100-plus million. And then you get into January and February. By the time you get to April, it’ll be a total of about 700 million,” he told a Senate Appropriations Subcommittee hearing. “They will be rolling in as the months go by and by the time you get to maybe the third or fourth month of 2021, then you’ll have doses for everyone.”

What they said: Pence accused Biden of wanting to raise taxes across the board, seeking to “bury our economy in a $2 trillion Green New Deal,” and attempting to “abolish fossil fuels and ban fracking.”

Fact check: Biden’s tax plan would raise taxes only on Americans making more than $400,000 a year. He also explicitly said that he would not ban fracking and that he did not support the Green New Deal, though his climate plan did feature some similarities to the plan. In fact, Biden’s lack of support for the Green New Deal was one of the main reasons progressive lawmakers like New York Rep. Alexandria Ocasio-Cortez were hesitant to throw their support behind the former vice president.