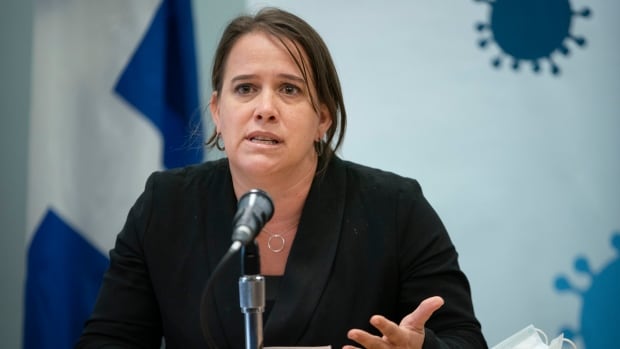 Montreal’s director of public health says a worrying trend is emerging in the second wave of COVID-19 cases in the city — a growing share of new cases are people aged 65 and older.

Public health is asking Montrealers to keep their distance from their older family members, even if they live in the same home.

“We see that it is quite different from what we were seeing in the first wave,” said Dr. Mylène Drouin, the public health director for Montreal. Last spring, most of the older Montrealers who caught COVID-19 were infected in long-term care homes.

The difference today is that about half of cases in those aged 65 and over are people living in their own homes or in private seniors’ residences.

Drouin said this means that parents should make alternative childcare arrangements and refrain from having family dinners for now.

“Maybe it is not secure to ask for grandpa or grandma to babysit this weekend,” Drouin said. “Maybe it’s not the time to have supper with the family.”

For grandparents who live with their children and grandchildren, Drouin asked Montrealers to find ways to limit contact between them and family members who are still going to work and school.

While most new cases are still Montrealers aged 18 to 34, those over 65 now make up 12 to 15 per cent of new cases on a given day. That’s more than twice the rate last week, which was 6 per cent.

Drouin said it appears that family members are transmitting the virus to their elders.

Montreal public health director Dr. Mylène Drouin says we will be living with the virus for many months to come and how well we fare depends on how well we act now. 0:58

She said community spread has been detected across the city, with Montréal-Nord, Outremont and Centre-Sud particularly worrisome. She said special teams have been deployed to those areas.

While the red zone restrictions have been put in place for 28 days, Drouin said Montrealers should learn to live with the virus for many months, and maybe years, to come.

Public health is working to contain small outbreaks in classrooms, daycares, care homes, workplaces and gyms. In Montreal’s Snowdon neighbourhood, Herzliah High School has extended its online-only classes until Oct. 19 after sending all students home due to an outbreak in a classroom last month.

“All of our indicators are on the increase,” Drouin said.

The greater Montreal region remains in a red zone, where social gatherings are banned and restaurant dining rooms, bars, cinemas and other public venues are closed. Starting tomorrow, gyms must close and organized sports must be cancelled as well.

Montreal Mayor Valérie Plante said she wants to keep the city’s playgrounds and other outdoor facilities open, but residents will need to keep their distance from others.

And she encouraged Montrealers to explore their local parks to see the fall colours, rather than congregating on Mount Royal.

In the last 24 hours, 269 more cases were confirmed on the island of Montreal. Seven COVID-19 related deaths have been reported in Montreal in the past week.