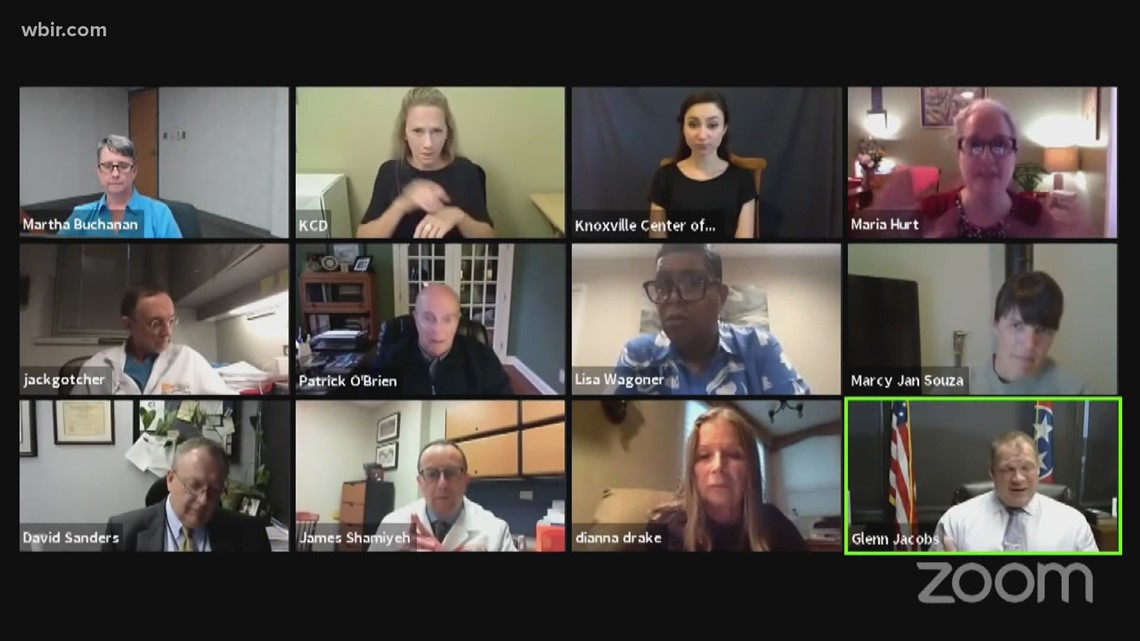 The Knox County Board of Health met Wednesday after the Knox County Commission passes a resolution recommending limiting their power.

KNOXVILLE, Tenn. — The Knox County Board of Health met on Wednesday to discuss their response to the spread of COVID-19 after officials reported a total of 10,255 cases in Knox County.

They discussed the county’s bar curfew, which requires all establishments offering on-premise consumption of alcoholic beverages or beer to close by 11 p.m.

Patrick O’Brien said that the curfew was originally supposed to last 28 days. So, he proposed a vote to extend it another 14 days to fulfill the original expectation of the order. He said that he hoped to be able to allow the curfew to expire at that time.

Members voted to continue the curfew, 7 – 1. Dianna Drake voted against the continuation.

Charity Menefee, who stood in for Martha Buchanan from the Knox County Health Department, said there were a few complaints of businesses violating the order, mostly on Cumberland Avenue. The Knoxville Police Department said they did not issue any citations due to curfew violations.

“Everyone I’ve talked to, from KPD and Chief Thomas, said it’s been really impressive what our business owners have done,” Patrick O’Brien said. “So kudos to them.”

Jack Gotcher also thanked a group of small business owners that sent a letter to the Board of Health expressing gratitude for their work. Maria Hurt said that there 90 businesses who signed the letter.

The vote to extend the alcohol regulation passes 7-1. It was originally supposed to be 28 days long, but the board had to vote on the extension because of a mistake in the regulation that had it ending tonight. #WBIR

Officials also discussed allowing an order prohibiting large gatherings to expire. The order prohibits gatherings of more than 25 people at restaurants and bars serving alcoholic beverages. O’Brien also suggested extending the order for another 14 days, hoping to allow it to expire at the same time as the bar curfew.

They voted unanimously to extend the order.

On Monday, the Knox County Commission also met to discuss a proposal that would have limited the board’s powers to enforce policies. The proposal would have stopped criminal sanctions for people who violate any board of health policies and would have prevented the board from creating policies more stringent that Governor Lee’s Tennessee Pledge.

During the meeting, Dr. Martha Buchanan said that there have not been any citations or arrests due to violations of the Knox County Board of Health policies. Jack Gotcher thanked members of the board for attending it.

“We are accountable to our professions, to our certifying bodies, our oaths, to state boards,” Maria Hurt said during the board’s meeting. “So we are held accountable. In fact, the county commission vetted us.”

Gotcher also recommended including data about the economic impact of future proposals, if possible, when the board is deciding on whether to approve a proposal. Menefee said that they have asked experts at UT to assist with collecting that data in the past.

In non-emergency times, she said it has taken a little while to collect the data.

South Carolina, Alabama and Virginia Tech have joined the joint study between UT and Univ. of Kentucky that’s looking at quarantine periods and how to shorten them. #WBIR

University of Tennessee Chancellor Donde Plowman also spoke during the meeting on Wednesday. She gave an update on a study UT is participating in with the University of Kentucky. She said that universities in South Carolina, Alabama and Virginia Tech asked to join the study.

She said students identified as having been in close contact with COVID-19 patients will be asked to take nasal swabs during their quarantine period. The study is meant to help officials identify whether a 14-day period is an appropriate length of time before people can leave quarantine.

Local health officials also presented proposed metrics on how to mitigate the spread of COVID-19. They gave information about when the board may consider loosening restrictions, and when they should consider passing more stringent policies.

Before approving the metrics, officials said that they would need to discuss them and which ones to settle on.

HAPPENING NOW: The Knox Co. Board of Health is meeting via Zoom. They begin introducing the newly appointed citizen representative, Ani Roma. She is a mother, certified health teacher, small business owner and community volunteer.#WBIR pic.twitter.com/osrv5KnWTA

A citizen representative was also added to the board as a result of the commission’s meeting. Ani Roma was called in for the first time on Wednesday. She is a mother, certified health teacher, small business owner and community volunteer.

Officials also discussed the number of COVID-19 cases in Knox County, the University of Tennessee and Knox County Schools. Officials also said they found discrepancies between local and state data. They said state officials were geocoding their cases, which could cause discrepancies if people have different home addresses from where they were tested.

They said inactive and active cases will be based on jurisdictional data and that people should expect a shift in the number of cases due to the change.

Board discusses possibility of meeting every two weeks instead of weekly.

Shamiyeh says since most of their regulations are two weeks in length it would make sense. #WBIR

Knox County Mayor Glenn Jacobs said the change would not affect scheduling or logistical processes. They voted unanimously to approve the change. Their next meeting will be on Wednesday, Oct. 14.