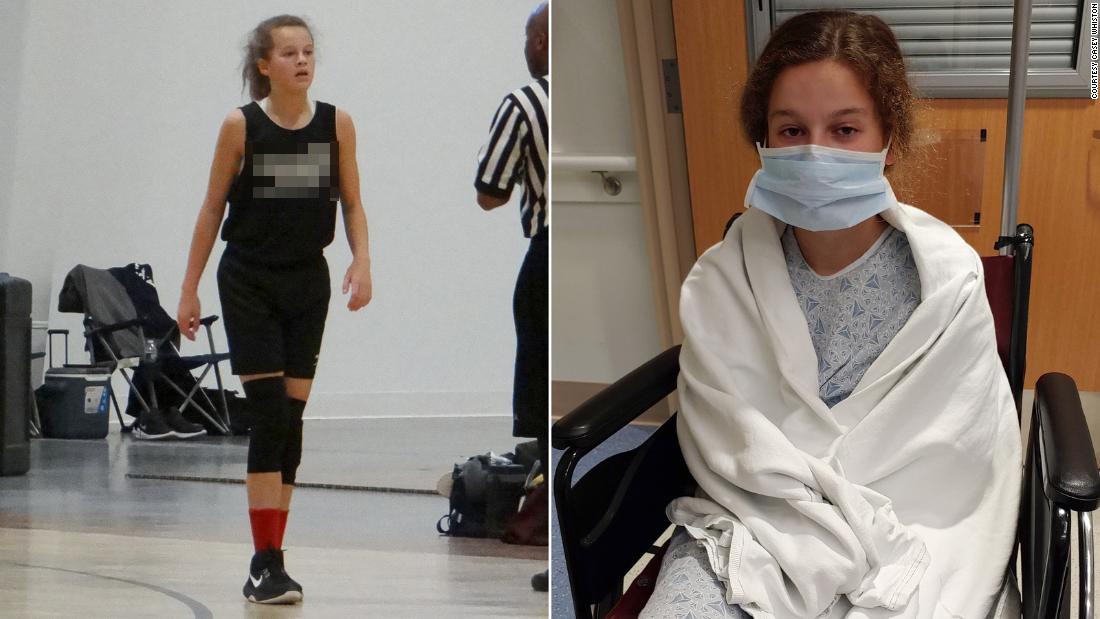 She is a Covid-19 long hauler, along with her sister Audrey and mother Jamie.

One of her friends came home in March after spending two years in Wuhan, China. That may have been the source of the virus that would cut across the whole Richmond family and leave them with six months — and counting — of fatigue, pain and uncertainty in its wake.

Jamie Richmond has tallied $6,000 in medical bills for two girls who were healthy until March.

Both girls now have a host of problems, including postural orthostatic tachycardia syndrome, which causes a person’s heart rate to shoot up upon standing and lead to dizziness or fainting.

“It’s been horrific to go through this for so long,” Richmond said.

More than 657,000 children and teens across the United States had tested positive for the virus as of October 1, according to the American Academy of Pediatrics and the Children’s Hospital Association.

That figure is just over 10% of the more than 7 million US coronavirus cases so far, but it’s likely underreported because it relied on state data that is inconsistently collected.

Researchers looking into the long-term effects of Covid-19 are taking notice about how long-haul symptoms are affecting children.

These researchers include a team at DePaul University in Chicago, who have launched two separate surveys, one for adults and the other for children, to help capture data on how patients are faring longer term after being diagnosed with Covid-19.

Long-haul children may be the most important cohort to research for a couple reasons, according to Leonard Jason, a professor of psychology at DePaul and director of the Center for Community Research, who leads that study.

“Kids are often more defenseless and don’t have the age, maturity or resources to stick up for themselves,” he said. “And kids are less complex in a lot of ways, so there are fewer extraneous factors.”

He has spent much of his career studying post-viral symptoms across a range of diseases and trying to extract lessons from the aftermath of past epidemics.

“If you look at all the pandemics from the Spanish flu on down, a certain number of people never get better,” he said. “At least 10% six months later seem to still be having symptoms. With Covid-19, I think the rates could be very much higher.”

His team just completed a four-year study seeking to determine how many college students who contract mononucleosis ultimately develop chronic fatigue syndrome. He sees many of the same concerns with longer-term illnesses children with Covid-19 might develop.

“I fear that a lot of the people will fall through the cracks,” he said.

The Richmond family in Boise does feel it’s falling through the cracks, despite the parents’ income and ability to take their kids to specialists for issues that have popped up, including vision loss and Sjogren’s syndrome.

“We are incredibly privileged,” Jamie Richmond said. “We are White and upper middle class. We have the means to help our girls. A lot of people can’t do that.”

At one point, that meant taking Audrey on three visits to the emergency room during a 10-day period. A doctor suggested she may have antiphospholipid syndrome, a rare autoimmune condition. But answers to the havoc Covid-19 has wreaked are fleeting.

Due to shortages in testing early on, the Richmonds weren’t able to get tested while the virus was in its active stage, despite acute symptoms such as diarrhea and Covid toes, and that’s when they say the medical system started ignoring them.

Their negative test results now feel like a black mark hindering them from getting adequate care, as doctors grapple with longer-term symptoms unexpected at the outside of the pandemic.

“They’ll say one thing to your face but they won’t treat you by what they say,” Veronica Richmond said. “It’s like they’re lying and saying ‘Yes, you have Covid, but no, I won’t do anything about it. It makes you feel powerless.”

A Maryland family got sick and stayed sick

Powerlessness has plagued Amy Frentheway and her family these past few months.

The mother of three from Pikesville, Maryland, had high fevers, stomach pain and near constant diarrhea in late March before testing positive during an emergency room visit.

Her children Isaac, 15, Grant, 13, and Maggie, 11, all got the virus but seemed to have recovered in April. But by May, each of them again relapsed into low-grade fevers.

“I was left with bone-crushing fatigue,” Frentheway said. “My kids have that same thing now too, with lots of brain fog. Some days they wake up and just go back to bed.”

For instance, her daughter, Maggie, no longer has any zest for life. Though she made it to a weeklong summer camp with her Scout troop, she had to sit out from activities a couple of the days. The usually upbeat and joyful girl could not interact with the other girls the way her mother was used to seeing.

“As a mom, I feel powerless to help her. It’s frustrating hearing that kids don’t get sick, that it’s not that bad for them,” Frentheway said. “Really!? Just come to my house to see.”

The family’s six-month journey of fatigue has continued nearly unabated. And based on the stories they’re hearing from other families through online support groups, they don’t think most doctors are equipped to deal with the unusual and unrelenting symptoms children with long-haul Covid-19 are experiencing.

“There’s no ending point that we know of,” she said. “We feel like we have to just navigate this ourselves.”

A hair stylist sees her children’s hair falling out

Consuelo Porras has been contending with similar problems with Covid-19 since March, when she began noticing differences in her children.

Porras, who lives with her husband and three kids in Aurora, Colorado, felt like her children’s circulatory systems were becoming visible through their skin.

“It’s almost like we’re becoming see-through,” she said. “This is not respiratory. This is a blood vessel disease.”

Her 2-year-old, Lianna, began to look like she had varicose veins in her cheeks. Her 6-year-old, Alexia, had veins swelling noticeably around her eyelids. And her 11-year-old, Xavier, had pronounced veins around his wrists. They all complained about muscle aches.

Alexia’s hair began falling out, with one patch the size of a half dollar. Their pediatrician insisted her hair was normal, but Porras was disturbed by running her hands through her daughter’s locks and being reminded of the coarse bristles atop a broomstick.

“I used to be a stylist. I know what is normal,” she said. “I feel like her hair is dead.”

She and her children also have neurological symptoms, causing brain fog and spasms in their sleep.

“‘Mommy, I feel like there are ants all over me,'” Porras recalled her daughter saying. “‘Why are they biting me?'”

Like others interviewed for this story, she complained of doctors telling her nothing was wrong with her or her kids, even though their lives felt upended in the months following coronavirus infection.

“Long haulers aren’t getting recognition they need because there wasn’t access to testing when we needed it,” she said. “The heart of a mother will never steer you wrong.”

An aspiring WNBA player is sidelined

For Joeyanna Hodnett, 13, the nightmare started with symptoms around March 22, shortly after she traveled with her family to a basketball tournament. She lives in a suburb just north of Boston.

Her mother was asymptomatic, and her father was sick for at least 20 days. Joeyanna was hit the hardest.

“She was knocked down so completely,” her mother Casey Whiston said.

“She had a mini-recovery in June and then a complete meltdown,” Whiston said.

Joeyanna started fainting and feeling lightheaded. That subsequent downturn required her to be hospitalized for three days and has opened up a Pandora’s box of symptoms.

Since then, Whiston and her daughter have been to more than 30 appointments with specialists including a rheumatologist, neurologist, pulmonologist, cardiologists, infectious disease specialist and a nutritionist.

Joeyanna has received diagnoses that include dysautonomia, post-viral syndrome, pain amplification syndrome and gastroparesis. She takes 18 pills a day.

“Her central nervous system has just been trashed. It’s like a tornado just went through,” her mother said.

An avid athlete who competed on three different basketball teams, Joeyanna dreams of playing in the WNBA. She used to be able to run 7 miles.

“Now I can only walk for 10 minutes,” she said. “I never took pills before. I was always pretty healthy.”

Over six months after the initial infection, she is improving a bit, graduating from a liquid diet to rice, soup and applesauce. She is adapting to online classes this fall better than expected, but she has no timeline toward a cure.

“No one really knows what the next steps are or how the recovery looks,” Whiston said. “We have the best hospital in the country working to find a way to help her, and so far there are no real answers.”