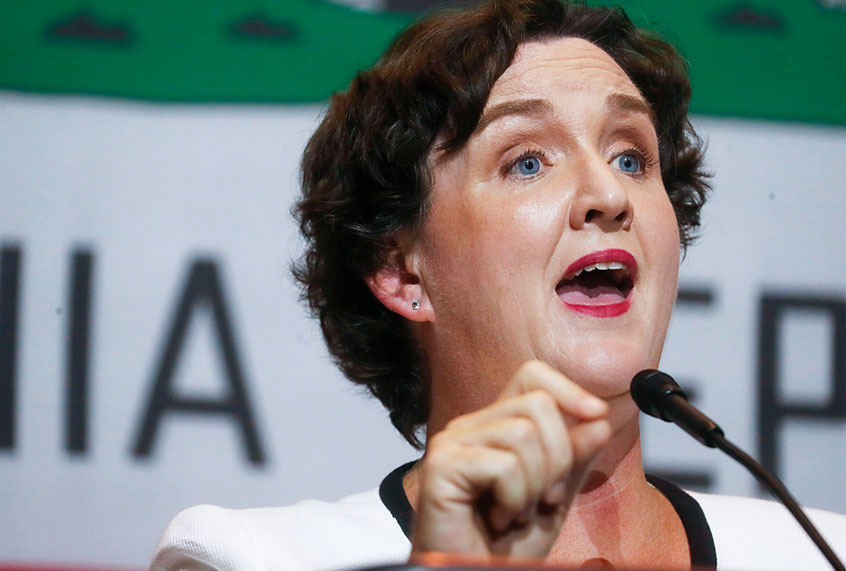 Porter (D-Calif.), a former consumer protection attorney, was the most ferocious committee member to address the CEOs. Bringing out her infamous white board, she attacked Celgene’s repeated price hikes for the cancer drug Revlimid, which now costs $763 per dose—in 2005 it cost $215. When Alles attempted to explain that the drug has been approved for new uses, Porter hit back, and hard.

“Did the drug start to work faster? Were there fewer side effects? How did you change the formula or production of Revlimid to justify this price increase?” Porter asked. “To recap here: The drug didn’t get any better, the cancer patients didn’t get any better, you just got better at making money—you just refined your skills at price gouging.”

Porter has built a reputation for speaking tough truth to power, on issues ranging from defending access to crucial public benefits, to challenging mega-bank CEOs on income inequality, to exposing the pernicious influence of dark money in politics.

Toward the end of Wednesday’s nearly four-hour session, three of the four members of the so-called Squad—Reps. Rashida Tlaib (D-Mich.), Ayanna Pressley (D-Mass.), and Alexandria Ocasio-Cortez (D-N.Y.)—slammed the CEOs over what Ocasio-Cortez called the “exorbitant cost” of life-saving medications.

Armed with a chart showing the cost of 40 milligrams of Teva’s multiple sclerosis drug Copaxone is more than five times as high in the U.S. as in Britain, Ocasio-Cortez refuted an assertion by Schultz that medications cost more in the United States because American patients have “very broad, and very early access” to new drugs.

Citing Teva’s own internal documents, Ocasio-Cortez showed the company was forced to lower prices by European governments—which unlike the U.S. have institutedspending controls—even as it raised prices for American patients.

Pressley asserted that “the lack of access to affordable life-saving medicine is an injustice [that] represents an act of economic violence and an attack on the basic principle that healthcare is a fundamental human right,” while Tlaib ripped Schultz for using charitable donations like “a side hustle.”

“Your pharmaceutical company makes these so-called charitable donations so you look like you give a shit about sick people,” said Tlaib. “But in reality these are just another scheme by your corporation to make money off of sick people.”