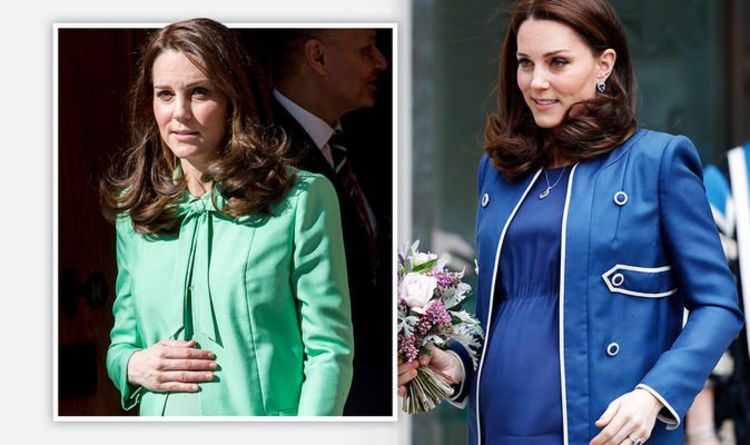 Royal fans were left concerned for the Duchess of Cambridge after reports emerged that she had been taken to King Edward VII Hospital in London, spending a few days recovering from a case of hyperemesis gravidarum. The spotlight has shone on women in the Royal Family in recent weeks with supporters debating who will follow in Princess Eugenie’s footsteps and announce they are expecting. Eugenie and her husband Jack Brooksbank recently confirmed they were to welcome their first child to the Windsor fold in the early part of next year.

Many believe Kate and husband William may want a fourth addition to the Cambridge family, especially after the Duchess movingly spoke about her life as a mother on a recent podcast.

But back while she was pregnant with George, the public were concerned for Kate – and the future heir.

Hyperemesis gravidarum is an acute morning sickness which requires supplementary hydration and nutrients.

It is usually diagnosed around nine weeks into the pregnancy, and in some cases resolves itself by 16 or 20 weeks.

Dr Ashley Roman, a professor at New York University Langone Medical Centre, explained the condition can become so difficult that women diagnosed with it routinely lose around five percent of their pre-pregnancy weight.

But she added: “It’s traditionally thought that nausea and vomiting is a sign of a healthy pregnancy.”

Dr Nancy Cossler, of University Hospitals in Ohio, also told ABC in 2012 that this condition doesn’t cause any birth defects, but it can be “torture to endure”.

She added: “The biggest problem with this is how it interferes with your life.

With question marks raised over whether Kate would indeed have twins, Ingrid Seward, editor-in-chief of Majesty magazine, was quizzed over who the heir to the throne would be in such a situation.

She said: “Well it would really be a case of which child appeared first.

“Whether it’s male or female, the firstborn will be in line to the throne. It’s that simple.”

Kate would eventually give birth to George in 2013, before welcoming Princess Charlotte and Princess Louis to the Royal Family.

Earlier this year, the Duchess opened up on life as a mother to royal children – as well as the future heir to the throne.

She told ‘Happy Baby, Happy Mum’ that she believed all mothers suffer from “mum guilt”, and that “anyone who doesn’t as a mother is lying”.

The royal added: “There’s such a pull, but I am such a hands-on mum, and whatever you’re doing you want to make sure you’re doing the uttermost best job you can for your children.”