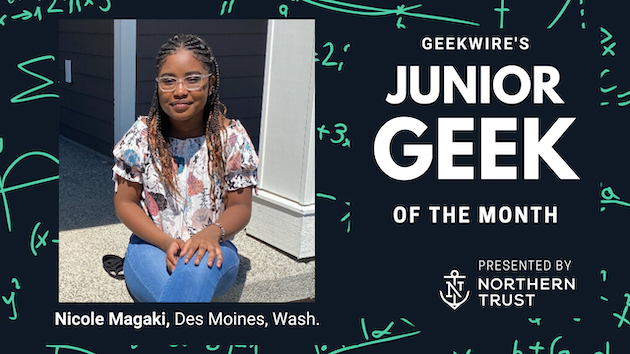 A 17-year-old from Des Moines, Wash., Nicole has long had an interest in science, medicine and research. As she moves forward with her education and career goals, she’s set her sights on reforming public policy and the overall health care system so that care and treatment are more accessible.

Nicole, a senior at Auburn Adventist Academy, is GeekWire’s Junior Geek of the Month for September. The monthly honor, presented by Northern Trust, recognizes talented young innovators, creators and entrepreneurs in the Pacific Northwest.

“I believe that all the work researchers and scientists are doing to cure disease won’t have the power to make change unless they are instituted in a strong health care system that’s fair,” Nicole said.

It’s a mindset that took root at a rather young age. Nicole is originally from Nairobi, Kenya. Before her family moved to the United States when she was 7, Nicole’s little sister was born with sickle cell anemia. She wishes her sister could have received a more rapid diagnosis and better treatment in Africa.

“I know that if we still lived in Kenya, it wouldn’t have been the best option for my sister’s health,” Nicole said. “So I’d like to make health care more accessible to people who live in Kenya and other countries in Africa.”

Nicole credits her father with pointing her toward science, technology, engineering and math. In middle school, he would put her in various STEM programs.

“It sparked my interest in science because it’s something I did during my free time or as my after-school activity,” she said. “Most people did sports and music, but STEM was kind of my thing.”

Nicole has volunteered with the Boys & Girls Club as well as a various senior centers. She plays the cello and she calls anatomy and physiology her most interesting class this year. She’s also enjoying a sewing class where she has learned how to make scarves — and lots of face masks.

Like previous Junior Geeks and students everywhere, the COVID-19 pandemic is having an impact on Nicole’s schooling. She’s missing a lot of what she looked forward to about her last year of high school.

“I think it motivates me a lot,” Nicole said of the health crisis. “It’s really taught me that we need to separate what’s happening in our government from health care. A lot of people have died and people are still continuing to die. It shouldn’t be something that is partisan. It should be, ‘How can we move on from here?’”

Nicole would like to get a bachelor’s of science in nursing as a pre-med major, with perhaps a minor in public health. She’s looked at schools on the East Coast and in California, but is more interested in staying in Washington to remain close to home.

Pathways program manager Katharine Lalish said that even in a highly selective program full of amazing students, Nicole was a star who was always ready to learn. She has remained involved with the group and recently led a virtual journal club about the bioethics of hospital triage in the time of COVID.

“She asked the kinds of questions that you would expect from a trained scientist,” Lalish said. “Nicole has the work ethic and excellent interpersonal skills that will allow her to continue to achieve great things in science and medicine.”

GeekWire will feature a new Junior Geek of the Month in profiles meant to capture how they are looking to make a positive impact on the world through their geeky pursuits. In addition, they’ll receive special recognition from our project partner, Northern Trust.

Do you know an exceptional Junior Geek between the ages of 12 to 20 who is going to change the world? Submit a nomination.

Nominees must be residents of the Pacific Northwest, and parental information must be included for those nominees under the age of 18. Jr. Geeks may nominate themselves but please be sure to include your parent or guardian’s contact information.

Read about our previous Junior Geek of the Month winners.