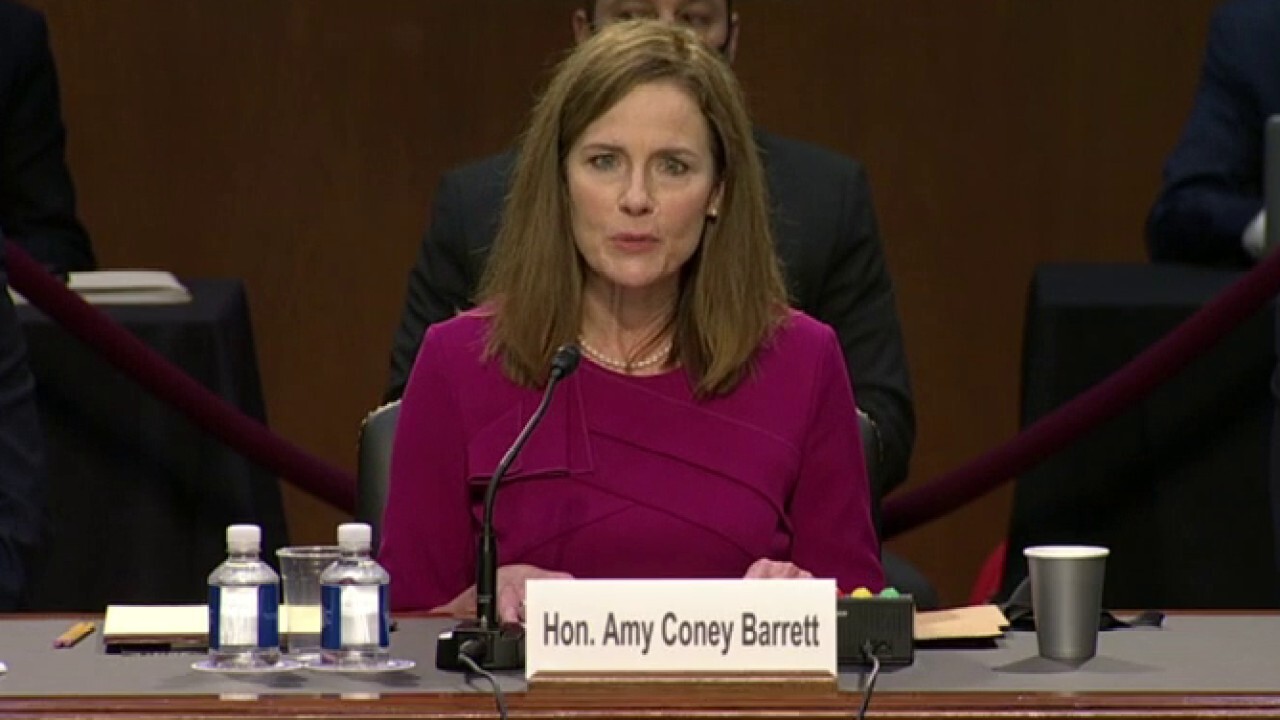 Posterboard pictures and a children’s book about the late Justice Ruth Bader Ginsburg set the stage for Democrats’ political theater at the Senate Committee on the Judiciary as it launched confirmation hearings for Judge Amy Coney Barrett Monday.

Unsurprisingly, the political Left seemed to read from the same script: whine about the process, take rhetorical shots at President Trump, and, if all else fails, try to disqualify Barrett on the Affordable Care Act (ACA).

Such attacks are destined to fail.

For one thing, no one seriously believes that Judge Barrett is the ACA’s grim reaper. Are we really to think that Barrett—a mother to seven children, including one with special needs—is insensitive to the health care needs of normal Americans? In all likelihood, she has spent more time toting her children to doctor’s appointments in her Honda Odyssey than the average judge – or politician.

JOHN YOO: IF SENATORS ATTACK AMY CONEY BARRETT’S FAITH, HERE’S THE REPLY SHE MUST GIVE

To suggest that one Justice on the Supreme Court of the United States could singlehandedly upend a statute is to reveal the Left’s preference for what middle-American calls, “activist judges.”

Outcome-based judging is the hallmark of the liberal judicial philosophy and has been since the last time the Left threatened (and tried) to pack the court in the 1930s.

Informed Americans can see through these attacks.

Judge Barrett is a careful and fair-minded judge who has demonstrated that she will apply the law to the facts of each case, allowing that alone to guide her decision-making.

The nation knows a good nominee for the Supreme Court when they see one, even if some Democratic senators do not.

Still, the Left persists in seeking to discredit someone who would be the first mother of school-aged children to serve on the U.S. Supreme Court. Why? Is that instead not cause for celebration? Not if you want to retain credibility with your base.

That’s why the Left continues to suggest that Judge Barrett’s religious beliefs disqualify her from a seat on the Court.

Sen. Chris Coons, D-Del. sought to mask his attack on Judge Barrett’s faith inside of a question about Griswold v. Connecticut—a nearly 60-year-old Supreme Court decision involving the government’s ability to regulate birth control.  The not so subtle accusation by Sen. Coons is that, since Judge Barrett’s church takes a theological position against the use of birth control, she could not possibly be unbiased as a judge.

Sen. Josh Hawley, R-Mo., was right to call such a question a near violation of the “no religious test for office” provision of Article VI of the U.S. Constitution. Likewise, Sen. Ben Sasse, R-Neb., protested anyone who would disqualify someone from a job on the high court because of their religious beliefs.

We are a nation with a rich heritage of religious tolerance. Questions about a nominee’s faith not only appear bigoted, but impede the First Amendment’s promise of preserving religious freedom for all Americans.

Perhaps Senator Coons, and his colleagues, should consider the poll First Liberty Institute commissioned last week.  More than two-thirds of Americans (62%) surveyed believe that questions concerning a judicial nominee’s religious beliefs should be off limits in Senate confirmation hearings.

But we all know what the Left is really after. They know Americans do not support their effort to stop Judge Barrett because of her faith and her profound credentials. All that is left is a transparent attempt to score sympathetic political points about health care.

It’s an act of political intimidation to discredit a potential Justice Barrett or, if they can, disqualify her. It is unlikely she will take the bait. Barrett—who has never stated she would strike down the ACA—is almost certain to decline comment on a potential case she could hear as early as November 10 when Texas v. California is argued before the Court.

It may not matter if she did, though. Justice Ruth Bader Ginsburg, during her confirmation hearings, advocated for access to abortion, but heard several cases involving the regulation of abortion.

More political theater is sure to come in the Senate in the ensuing days.

Theater and scare tactics are always the last resort against those whose qualifications and character cannot be touched. But when the lights come on after the vote is tallied, Judge Barrett is almost certain to return to Indiana, pack up the family, and take her seat as the next Associate Justice of the U.S. Supreme Court.