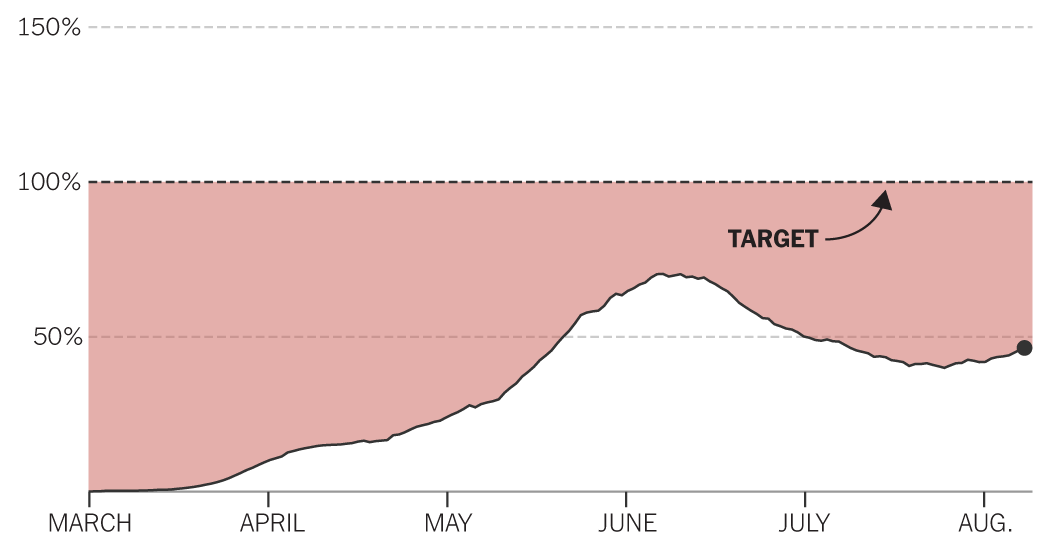 
The number of daily coronavirus tests being conducted in the United States is 65 percent of the level considered necessary to mitigate the spread of the virus, as many states struggle to increase testing.

states are near the target

states are far below the target

*Includes 9 states and Washington, D.C. States within 20 percent of the testing target are considered “near” the target.

An average of 962,000 tests per day were performed over the past week, according to data collected by the Covid Tracking Project, well below the current nationwide target of 1.5 million daily tests. The target, which is based on a methodology developed by researchers at the Harvard Global Health Institute, is different for each state and varies over time as infection rates change.

How each state’s current testing measures up

Average daily testing and hospitalizations in the last two weeks

Note: Positive test rates and percentages of targets are calculated using cumulative figures from the last 14 days. All other values are 14-day rolling averages. Trendlines for daily tests and hospitalizations show averages for the last two weeks.

Testing operations in the United States were delayed at the start of the outbreak after tests developed by the Centers for Disease Control and Prevention were found to be faulty. Since then, testing levels have steadily increased across the country, but many states have struggled to stay ahead of new outbreaks as overwhelmed labs report processing delays and shortages of crucial testing supplies. The resulting backlog can leave sick people undiagnosed, with the potential to further spread the virus as states reopen.

The Harvard researchers say that at minimum there should be enough daily capacity to test anyone who has flu-like symptoms and an additional 10 people for any symptomatic person who tests positive for the virus. That level of testing — which, according to researchers, is the minimum necessary to mitigate the disease — would require a significant increase over the number of daily tests currently being performed. Their estimates for the testing required to suppress the spread of the virus are much higher.

Aside from current testing levels, another important indicator of a state’s testing performance is its positive test rate, which is the percent of tests that come back positive. Lower rates suggest that testing is more widespread and that it is not limited to those with severe symptoms. Positive rates should be at or below 5 percent for at least 14 days before a state or country can safely reopen, according to the World Health Organization. In the United States, the current positive rate is 5 percent.

Where testing is far below recommended levels

Most states remain far from the minimum level of testing needed to reduce the spread of the virus.

Rate of testing compared to target

Where testing is above or near recommended levels

Over time, some states have reached the minimum testing target, and a few have exceeded it.

Rate of testing compared to target

Note: States with fewer than 2,000 total cases are not shown.