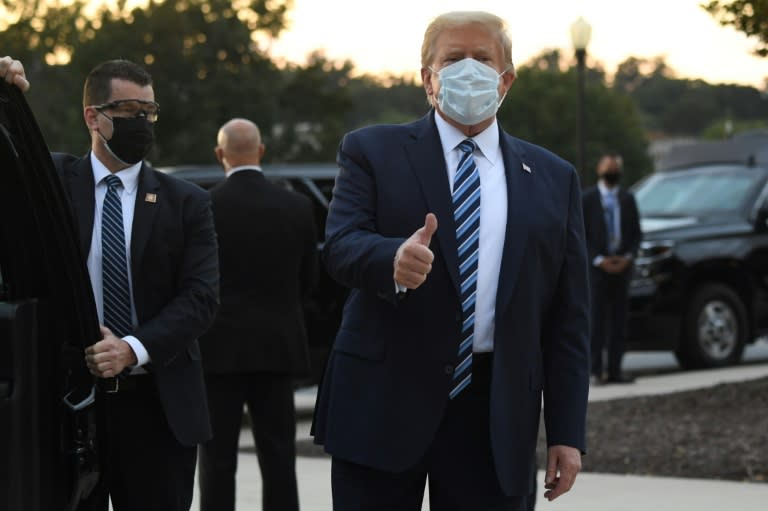 But is he risking his recovery by taking on too much too soon, and could he still infect others?

According to Amesh Adalja, an infectious disease and critical care doctor as well as scholar at Johns Hopkins University in Baltimore, there is a wide variation between patients in terms of the speed of their recovery.

“Some people are able to resume their activities of daily living pretty quickly. There are other people to take some weeks before they’re back to their baseline,” he said.

In general, “for someone in their 70s who was hospitalized with Covid, I would say it takes a couple of weeks to get back to their baseline.

“But because he’s the president, he has a lot of people assisting him with his activities of daily living. He probably doesn’t carry his groceries in, he doesn’t drive a car.”

Trump was hospitalized for three nights on October 2 and has been in the care of the White House medical unit — which can provide hospital-level care — since October 5, four days ago.

Doctor Mangala Narasimhan, senior vice president of critical care at Northwell Health, New York, said patients of Trump’s age who had needed oxygen for Covid pneumonia often continue to experience “severe fatigue and myalgia, which are muscle pains and aches,” for some time after.

Both doctors stressed it is very difficult to know precisely where Trump is in his recovery, since his medical team and others around him have provided opaque and at times conflicting updates.

– Danger of coming back too soon –

A well-known danger from over-exertion following disease is that it wears down the immune system.

“He needs his immune system to fight the virus — that’s why you’re always told to stick to rest and drink fluids, because your immune system needs to be at its optimum,” said Narasimhan.

She added this was particularly crucial for older patients who are more susceptible to experiencing a second viral replication phase where symptoms such as fevers and chills return.

Trump’s full medical history and underlying conditions aren’t fully known, but one thing we are aware of is that he has mild heart disease that could be aggravated, said Adalja.

These include “inflammatory markers” that would indicate how he was recovering from the inflammatory phase of the disease, and certain blood values that would reveal how likely he is to develop clots as a result of the virus.

“People tend to form clots, and depending on what his blood levels are of certain things, you would want to make sure that at 30 days afterwards that he is on medicine that would prevent clots,” she said.

“There’s all kinds of other symptoms and side effects that happen from this virus that we’re just starting to understand.”

A small fraction of people become so-called “long haulers,” experiencing a poorly-understood post-viral phase of the disease that can involve fatigue and shortness of breath for weeks, months or potentially longer.

– Could he infect others? –

White House physician Sean Conley said that he fully anticipated the president’s “safe return to public engagements” by Saturday October 10, because that was 10 days after he was diagnosed.

In fact, since Trump was diagnosed on October 1, Saturday will be the ninth day after diagnosis — but the important metric is the number of days since symptom onset, and this hasn’t been disclosed.

The guidelines from the Centers for Disease Control and Prevention says that, for people who had mild or moderate Covid-19, isolation and precautions can be discontinued 10 days after symptom onset, and once they have been fever free for 24 hours.

For more severe disease the guidelines say it’s up to 20 days after symptom onset — but in Trump’s case, “we don’t know if he had moderate or severe disease,” said Narasimhan.

“We also don’t know what his true symptoms are and if he really is symptom free or not,” she added.