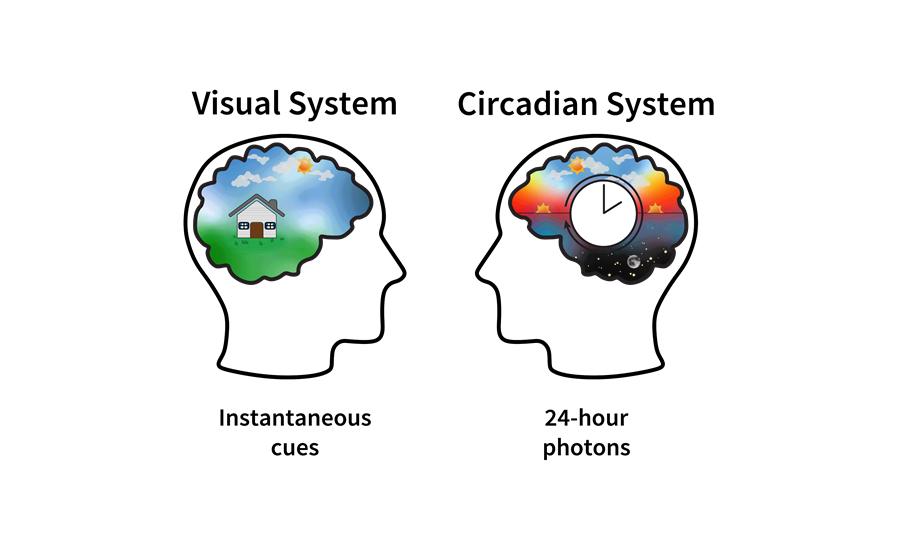 In the previous article, “Circadian principles require a new light language,” we discussed how the current lighting language is concerned exclusively with the visual system, lacking the vocabulary to describe light’s impact on the circadian system. While the visual system is concerned with nearly instantaneous environmental cues, the circadian system is accumulating photons throughout the 24-hour day, registering a lot of light as day and an absence of light as night. Remember that without a robust 24-hour cycle of bright light during the day and darkness at night, the circadian system loses track of when to sleep, when to eat, and when to work.

The visual cortex and biological clock are located in different parts of the brain, and have differing sensitivities to light. Using the current vocabulary of footcandles and correlated color temperature (CCT) as metrics can describe the visual impact; however, these terms are a language that is not understood by the circadian system.

For starters, we must talk about the light that falls on the vertical plane (at the eye) rather than just on the horizontal plane work surface). Furthermore, a larger vocabulary that includes terms like circadian light (CLA) and circadian stimulus (CS) needs to be accepted by lighting professionals to accurately describe light’s impact on the circadian system. Fortunately, a translator of some of the old language into the new language is available.

There are only a few instruments that can measure CLA and CS directly and there are no photometrically realistic lighting-design software packages that “speak circadian.” As a result, the Lighting Research Center (LRC) has developed the CS Calculator to translate vision speak to circadian speak. To speak circadian, the CS Calculator needs to know how many footcandles (actually lux) are at the eye (EV) and it needs to know the relative spectral power distribution (SPD) of that illuminance. From those two measures, CLA and CS can be determined.

Visual metrics, such as CCT and illuminance (in units of lux or footcandles), and circadian metrics, CLA and CS, depend upon the SPD of light. Simple illuminance meters use colored filters that reduce the radiant power incident on the detector at certain wavelengths to measure illuminance and CCT directly; these devices are known as photometers. Today, small portable spectroradiometers obviate filters by measuring the radiant power incident on discrete detectors, one each for a very small wavelength interval (in units of W·m-2·nm-1) and then calculating the metric value from these spectral measurements.

We are in a transition from relying on colored filters and a small number of visual metrics to having easy access to spectroradiometers from which visual as well as circadian metrics can be readily calculated. Fortunately, even when all we have is a simple illuminance meter and the manufacturer’s relative SPD (unitless), we can still calculate CLA and CS. 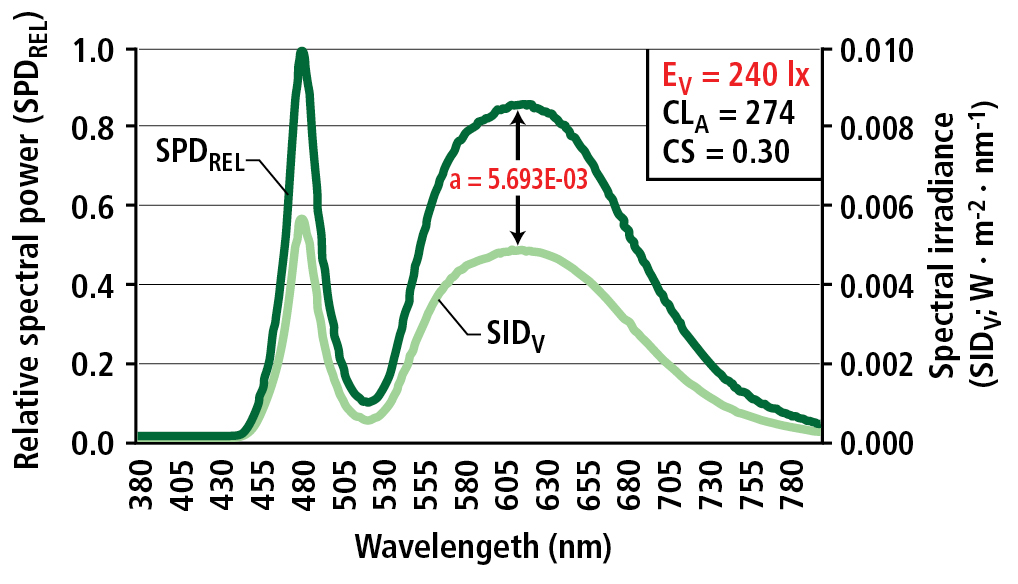 FIG. 1. Work at the LRC and in the UL 24480 committee has defined circadian-centric metrics including circadian light (CLA) and circadian stimulus (CS), and provides a path toward calculating the intensity of a given light source need to achieve circadian response. [Image credits: All illustrations and tables courtesy of Allison Thayer, the Lighting Research Center (LRC).]

Illuminance, E, is a measure of the density of radiant power, or irradiance, weighted by the photopic luminous efficiency function, Vλ, on a given plane (in units of weighted W·m-2, in lux or footcandles). Once we know the illuminance at the plane of the corneas (EV) and the relative SPD, we only need a scaling factor, a, to determine the spectral irradiance at the corneas. The wavelength increment of the SPD is represented by Δλ where, for example, Δλ = 5 for data provided
in 5-nm increments (Fig. 1).

Solving the above equation for a gives the scaling factor to convert a relative SPD, SPDrel, to spectral irradiance in units of W·m-2·nm-1.

The equation for converting an SPDrel to spectral irradiance at the eye, SIDV, is then

The illuminance, EV, must be in units of lux (lumens per square meter) so that SIDV will be in units of W·m-2·nm-1 and can be used for CLA and CS calculations. It is important to note that an SPD, by definition, is based upon radiometric measurements in units of watts rather than quantum energy rates in units of photons s-1.

Why can’t we rely on CCT?

When designing lighting for circadian effectiveness, a CCT designation is useless, particularly now that variations among LED spectra have become so common. In Fig. 2, two sources rated as 2700K and measured to be 2729K are shown along with their SPDs and their chromaticity coordinates relative to the blackbody locus. Remember from the previous article, a CCT designation defines a line — not a point in chromaticity space — so illumination from these two sources will not only look different, they will also have very different effects on the circadian system because of varying spectral content. For example, to achieve equal effectiveness at the suggested daytime target of CS = 0.3 (UL 24480), Spectrum 1 (red in Fig. 2) requires significantly more light at the eye (EV) than Spectrum 2 (green). Since these variations among LED light sources of the same CCT are now quite common, it is critical to not only know how illumination from these LED sources will appear, but also how effective that illumination can be for the circadian system.

To help bridge the gap between vision and circadian speak, three panels were developed to represent three commonly specified CCTs: 3000K (warm), 4000K (neutral), and 5000K (cool) (see Fig. 3). Each shows results from the CS Calculator, where the x-axis in all three graphs is the illuminance at the eye (EV in lux, not footcandles) and the y-axis is CS calculated using various relative SPDs. Each line represents a different LED light source of the same rated CCT. 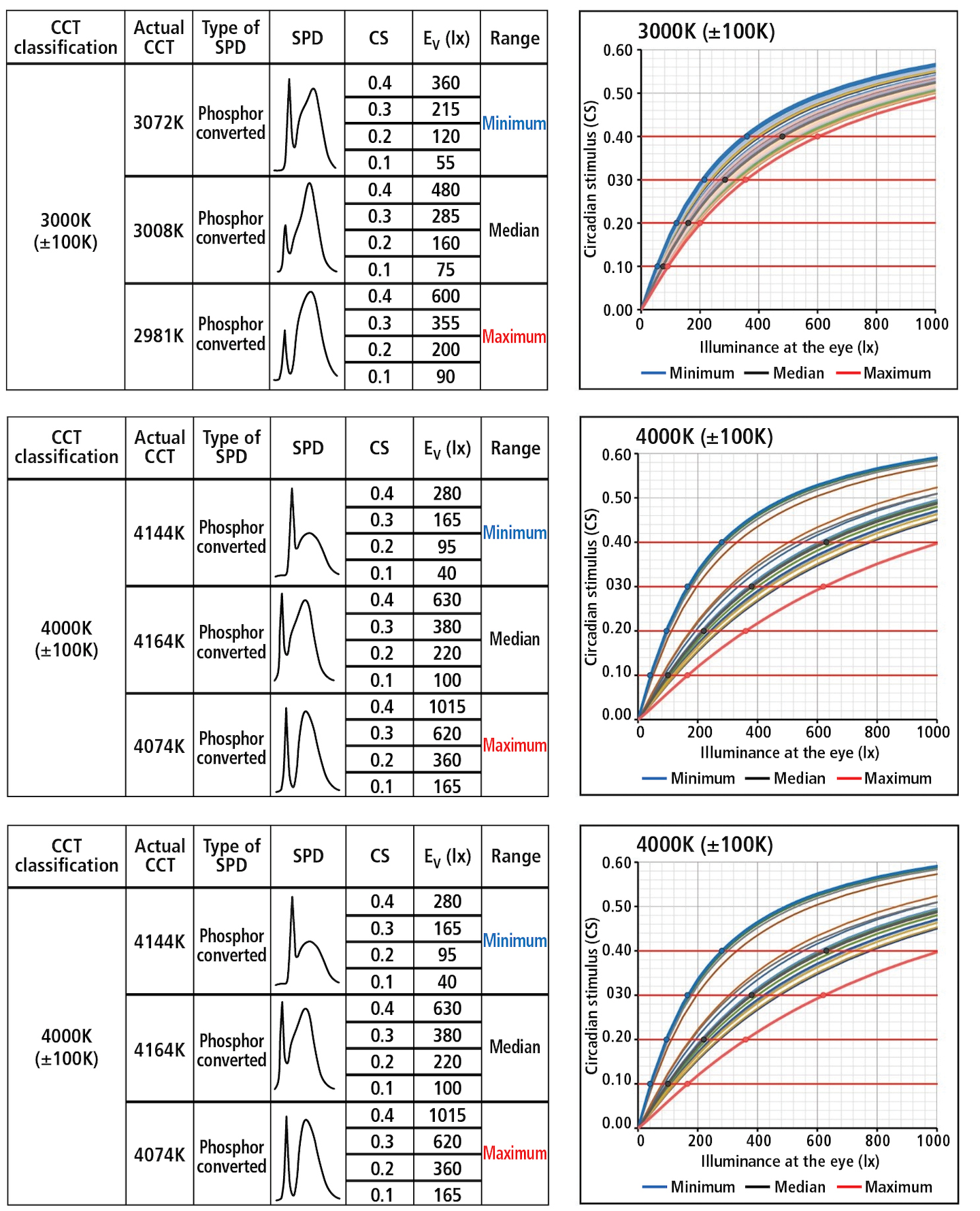 FIG. 3. Data collected from many LED sources at the LRC can be shown graphically to illustrate the broad range of different light levels needed to achieve circadian response.

Perhaps surprisingly, the lowest EV to reach a criterion CS = 0.3 as recommended in UL 24480 for daytime is a neutral 4000K LED light source (EV = 165 lx) — which is less than any of the cool 5000K light sources. The largest vertical illuminance range is seen at 4000K, requiring anywhere between 165–620 lx — a difference of 455 lx. The reasoning for the wide range for 4000K, compared to the other CCT classifications, will be discussed in a subsequent article.

Often people look at the SPD and try to make sense of what light source will be most effective for the circadian system. However, this cannot be done with any certainty. Two LEDs may have similar CCTs but possess different blue pump peaks (see Fig. 4). Spectrum 1 (red) has a peak emission close to the peak sensitivity of the photopigment melanopsin at approximately 480 nm, requiring 515 lx at the eye to reach a target CS of 0.3. However, Spectrum 2 (green) has a spectral gap at about 480 nm, yet requires the lower illuminance of 285 lx at the eye to reach a CS of 0.3. 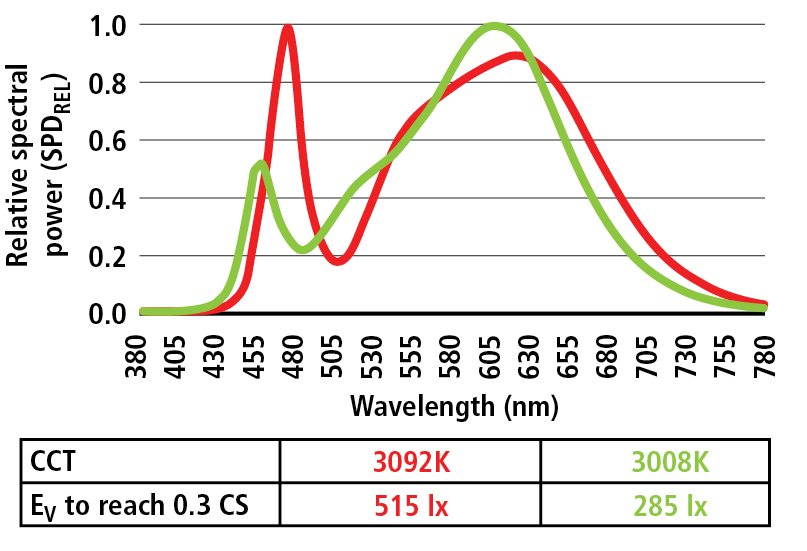 FIG. 4. The location and magnitude of the blue peak in a phosphor-converted LED ultimately impacts the light level required to stimulate the circadian system.

In general, these figures clearly show that CCT is not useful for specifying circadian-effective lighting, and a more detailed breakdown of the spectrum is needed for more accurate CS predictions. A new version of the CS Calculator which includes updates from recent research findings will be released soon. Although calculations and results may vary, for the purposes of this exercise, the message remains the same. To accurately estimate the relative effectiveness of different SPDs, all wavelengths matter. A more detailed description of this concept will be discussed in an upcoming article exploring subadditivity.

It must be emphasized that we cannot use CCT to translate intorelative SPD. Too much information is lost in a CCT description that cannot be recovered. CCT only numerically describes light sources as their illumination appears to be cool, neutral, or warm. A multitude of SPDs can fall under a single CCT designation. In other words, lights of exactly the same CCT will all have different CLA values, and vice versa, even at the same vertical illuminance (EV).

Editor’s note: Part 3 in this series will resume with the January/February issue, discovering how light is interpreted through the eyes and brain and explaining the concept of subadditivity.

The author would like to thank Jean Paul Freyssinier, MS, senior research scientist and adjunct assistant professor at the Lighting Research Center (LRC), for his work on the content development of the panels illustrated in Fig. 3. She would also like to thank Mark Rea, PhD, LRC director and professor, and Andrew Bierman, MS, LC, senior research scientist and adjunct assistant professor, for their contributions to the work on calculating CLA.

Get to know our expert

ALLISON THAYER, MS, BA, is a research specialist at the Lighting Research Center (LRC) at Rensselaer Polytechnic Institute. She holds a bachelor’s in architecture, and a master’s of science with a concentration in lighting from Rensselaer. Thayer has played a main role in the development of the structure and content of the Healthy Living website.

For up-to-the-minute LED and SSL updates, why not follow us on Twitter? You’ll find curated content and commentary, as well as information on industry events, webcasts, and surveys on our LinkedIn Company Page and our Facebook page.