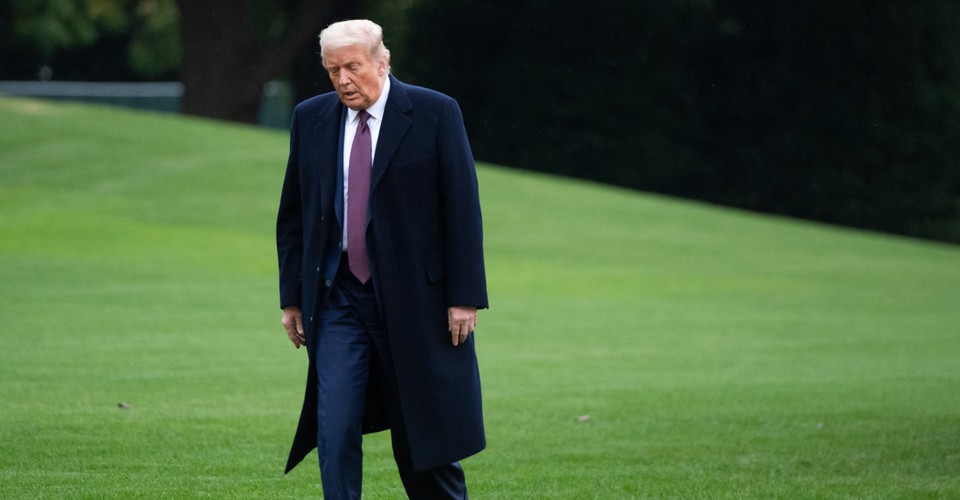 During the press conference today, Conley said that Trump was “doing very well,” but added that he had been experiencing symptoms as far back as Thursday, including a fever and a cough. They were severe enough that Trump inquired as to whether he should be lying on his stomach in a prone position (which has shown to help some COVID-19 patients breathe more easily). In response to questions, Conley declined to comment on when the president had been infected, or when he’d last tested negative. And in three separate exchanges with reporters, Conley dodged the question of whether Trump had ever required supplemental oxygen—which would be a sign of early stages of respiratory failure—emphasizing only that he does not require oxygen at the moment.

By the few available objective measures, Trump was not himself on Friday. He went almost an entire day without tweeting; one of the few such days in his presidency. As he exited the White House and boarded Marine One for the trip to the hospital, he gave only a meager thumbs-up to the press. He climbed the stairs into the helicopter unassisted, but used both handrails. The White House has indicated that he “will be working from the presidential offices at Walter Reed” out of “an abundance of caution.” Today, his doctors confirmed that he was an admitted patient.

The disease is known to take sudden turns for the worse, within a matter of hours. So being monitored in a hospital is not an unreasonable move, especially for a person in a high-risk demographic, like Trump. It would be unsurprising to learn later today that Trump requires oxygen, or to learn tomorrow that he has moved to the intensive-care-unit bed in his presidential suite. But it would be equally unsurprising to learn that he is indeed working from the hospital and will be home on Monday, and back on the campaign trail within the week.

By midnight yesterday, Conley had reported that the president had received yet another experimental drug, the antiviral remdesivir. The news that Trump had received these two drugs does not give any meaningful clue as to how sick he is. Often when a person receives experimental therapies, it suggests that their condition is at least more than a mild cold. But Trump is inclined to try out novel medicinal approaches. He said that he was taking hydroxychloroquine and azithromycin in May, despite a lack of evidence that these would have any bearing on whether he would contract the coronavirus. That same mentality could lead him to request antibodies and antivirals like remdesivir at the first sign of illness. Both have shown mixed results in trials so far, but both seem unlikely to make a person worse off.

What would be meaningfully objective news is if Trump starts requiring oxygen regularly, or if imaging studies suggest that he’s developing pneumonia. It is crucial that there be transparency and honesty when reporting such basic facts in a moment like this. The false reassurance that has defined Trump’s response to the pandemic stands to destabilize the world in an entirely new way if people are unclear on the president’s functional status. If his own doctor can’t share an honest account of the president’s need for supplemental oxygen, he loses the credibility to offer reassurance in a more dire scenario. People may rightly assume the situation is worse than they’re being told.

James Hamblin, M.D., is a staff writer at The Atlantic. He is also a lecturer at Yale School of Public Health, co-host of Social Distance, and author of Clean: The New Science of Skin.