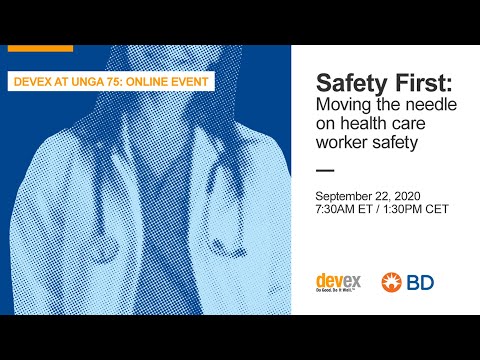 Enforcement of policy and legislation, better surveillance and reporting systems, ongoing training, and promoting a culture of workplace safety were the key messages from experts speaking at the “Safety First: Moving the needle on health care worker safety” live event, which coincided with the 75th session of the U.N. General Assembly.

The event, co-hosted by Devex and BD, focused on health worker safety — particularly regarding needlestick injuries and exposure to hazardous drugs, still a worryingly common occurrence. Panelists noted how the current pandemic highlighted these risks.

“[T]he bottom line is health workers should not have to put their own lives at risk to save the lives of others. Each health worker is precious, and at times like the Ebola outbreak in West Africa in 2014, or now with COVID-19, this kind of comes to the forefront,” said Gary M. Cohen, executive vice president of global health at BD and president of the BD Foundation, speaking with Devex Senior Reporter Jenny Lei Ravelo who moderated the event.

While much progress has been made since a landmark World Health Organization, UNICEF, and United Nations Population Fund joint policy statement on the use of auto-disable syringes in immunizations and U.S. legislation to protect health workers from needlestick injuries in 2000 — with similar legislation enacted soon after in Taiwan, Uganda, and Brazil — Cohen said more needs to be done since “enforcement varies, you need more than policy you also need those policies to be enforced.”

Further, occupational exposure and measures to reduce it are still highly variable.

That may also lead to a disproportionate impact on women as they comprise the majority of the health workforce, as noted by Renuka Gadde, vice president of global health at BD.

In addition to the risk of contracting a bloodborne pathogen, health care workers suffering needle stick injuries often also face stigma — which can impact their health-seeking behavior. Devex asks a CDC adviser in Kenya why stigma is such a big problem and what can be done to combat it.

“More than 70% of the health workforce, particularly nurses … tend to be women … so you should think about it as a gender diversity issue, as well as a health care worker safety issue,” she said.

The anticipated release of the COVID-19 vaccination also raises new concerns according to Amber Hogan Mitchell, president and executive director of the International Safety Center.

“[T]his is something that we really have to keep in mind as mass distribution of injection devices occurs when there is a COVID vaccine. This means careful attention to safe injection practices, using devices with sharps injury prevention … and really increased mindfulness on safe and effective training,” Mitchell said.

To understand how many people are affected, Mitchell said better surveillance and reporting systems can help.

“[W]e only know how prevalent injuries are … if we measure them. This is the critical importance of needlestick and sharps injury incident surveillance. And really we can only address and work to prevent what we measure,” Mitchell said.

Dr. Sanjeev K. Singh, medical superintendent of the School of Medicine in Kochi, India, and Dr. Daniel Kimani, technical advisor at Centers for Disease Control in Nairobi, Kenya, faced similar issues in terms of knowing how many workers are affected by the issue and encouraging people to report.

“We actually don’t know the magnitude because of the underreporting, but we suspect that every year between two and four out of 10 health care workers actually get a needlestick injury,” Kimani said, while Singh described the estimated rate of injuries in India as “astronomical.”

Injuries can still be difficult for health care workers to report due to access, time, or concerns about confidentiality. Mitchell recommended some specific measures to manage these problems.

“I think one of the ways to improve reporting is … for people to know where to go. So a lot of times if they’re out in the community … they may wait, or forget, or not know exactly where to report, [so] having instantaneous surveillance systems are a good way to do it.”

Singh also spoke of the difficulty of training especially when there was such a high attrition rate of nurses, in particular, making continual training somewhat redundant.

In Kenya, some progress had been made in terms of policy, including the adoption of a general infection prevention and control policy and an injection safety policy derived from WHO’s 2015 policy, Kimani said, but there are still some behavioral change barriers to overcome.

“One of the reasons we have so many injections in Africa and in our country is because patients prefer to get an injection. They believe an injection is stronger, it is faster … and that makes health care workers sometimes give it unnecessarily. So we have had campaigns to try and raise awareness that sometimes a tablet can be as good as an injection,” he said.

For more coverage on health worker and patient safety, visit the Safety First series. Join the conversation using the hashtags #HCWSafety and #PatientSafety.