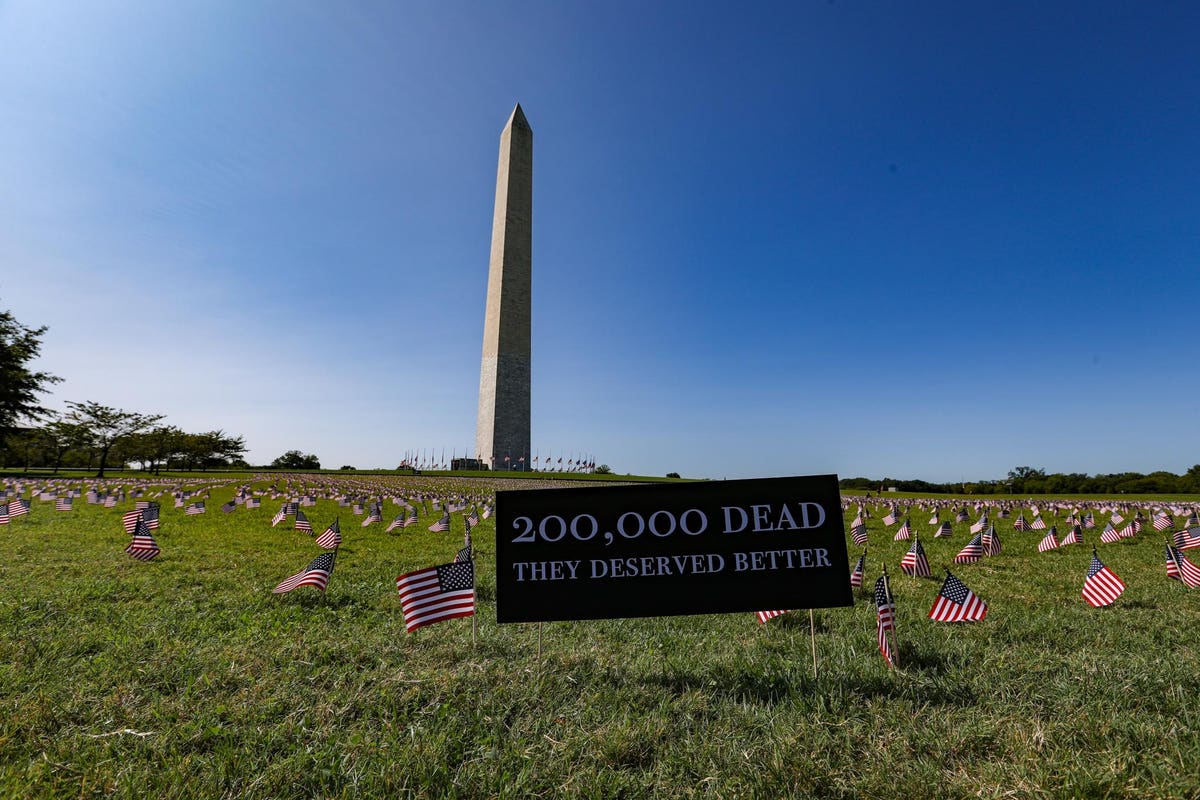 One thing’s for sure. The 204,499 deaths in the U.S. from the Covid-19 coronavirus that’s currently reported on the Johns Hopkins University Coronavirus Resource Center website is not the actual number of deaths in this country from the severe acute respiratory syndrome coronavirus 2 (SARS-CoV2). Many public health and infectious disease experts have said that such death tallies are most likely underestimates. Then, there are those who have argued the opposite, including conspiracy theorists who have claimed that death tolls are being deliberately inflated. So why has it been so difficult to get accurate tallies?

1. The lack of a coordinated national surveillance program.

The fact that our country, including the federal government, is relying on something besides the federal government to track national cases and deaths highlights one of the major problems. Remember that the Johns Hopkins University web site first arose when a graduate student at the University, Ensheng Dong and the head of the lab that he works in, Lauren Gardner, PhD, an Associate Professor of Civil and Systems Engineering and Co-Director of the Center for Systems Science and Engineering at Johns Hopkins University, noticed the lack of a system to track Covid-19 cases. Dong, who had come from China to the U.S. for graduate school, was personally interested in what was happening with the virus, as Gardner indicated in an article written by Jocelyn Kaiser for Science. This prompted Dong and Gardner to set up an initial web site to track cases, as described in a correspondence to The Lancet. Eventually, the web site went viral, so to speak, mainly because there was a lack of alternatives.

Keep in mind that the graduate students in Gardner’s lab never really went out and counted the number of Covid-19 deaths directly themselves. Instead, their efforts have been in collating and organizing existing reports from different sources such as various states and jurisdictions and presenting the info on a web-based platform. Although the team at Johns Hopkins University maintaining the web site has since grown, the web site can’t be considered an official national source

That’s because as a University, Johns Hopkins can’t tell states and other jurisdictions how they should be collecting information on Covid-19 cases and deaths. There’s only one body with the authority to do so. And it’s not Kim Kardashian. It’s the federal government that has the legal authority and the resources to keep everyone coordinated.

Asking states to coordinate themselves would be like a football coach telling a team, “OK, all of this practicing, plays, strategy, and playing in games stuff, you players handle among yourselves. I’ll handle the press conferences and lift the trophy when you are done.” Without the federal government organizing efforts, the states and other sources could be collecting information in many disparate ways. Can you imagine what would happen if the National Weather Service stopped providing everyone weather information and instead left a bunch of graduate students in a lab somewhere to be responsible for telling everyone across the country where it may rain or when a hurricane may come?

2. The lack of testing and lack of a coordinated national testing program.

You can’t tell if someone has Covid-19 if that person hasn’t been tested for Covid-19. Therefore, if a person passes away, the only way to really tell if Covid-19 was the culprit is to have administered a test while the person was actively infected. The trouble is testing is a bit all over the place right now. Correction, testing is not all over the place, which is the problem. Testing is only some of the places right now. A handful of states like New York and California have been coordinating testing more extensively than others. So it isn’t clear what percentage of actual Covid-19 cases and deaths each state is currently catching.

3. Lack of resources and an adequate public health infrastructure.

People typically do not use the words “public health” and “too much money” in the same sentence, unless the word “not” is somewhere in the mix. Instead the words “crumbling”, “overstretched”, “deteriorating”, “WTH”, “the toilet doesn’t work here”, and “do you realize there is only one person here handling all this” are more frequently used. “Crumbling” is never a good word to hear unless you happen to be baking. Many health departments just don’t have the personnel, time, and technology on hand to keep accurate records. There are probably bathrooms in Facebook’s headquarters that are nicer and more spacious than the space available for many public health departments around the country.

4. Delays in or even absence of reporting.

Once a death from Covid-19 has occurred. It has to be reported to the proper authorities and then eventually make its way up the chain to whomever is assembling the death count at the state level. If you think such reporting occurs rapidly and efficiently, here are three letters for you: DMV. The systems for public health reporting to the Department of Motor Vehicles (DMV) can be like what cheese wiz is to real Gouda cheese. Public health reporting in many places is not Gouda or good.

5. Doctors being unfamiliar with the Covid-19 coronavirus.

Not all physicians may be aware of the symptoms and signs of Covid-19 and when to test for the virus. Mixed messages out there from parts of the federal government certainly haven’t helped. How people who have died from sepsis, respiratory failure, or other potential complications of Covid-19 were actually tested for the virus? Even though awareness has certainly improved since the beginning of the pandemic and the testing situation has gone from really bad to less really bad, there still may be many cases that have gone unidentified.

6. The virus, the diseases that it causes, and death are complex.

Some things are clear and straightforward. Avocado toast is delicious. You shouldn’t put an apple pie in your pants. Baloney doesn’t belong in a cake. However, other things are much more complex. The Covid-19 coronavirus is not like the infinity gauntlet. One snap doesn’t just make people immediately dissolve into thin air. The virus can take time to do damage and trigger a chain reaction that over time (sometimes weeks and months) eventually leads to a person’s death. A death from Covid-19 should be any death that would not have occurred had the person not been infected with the virus in the first place.

For example, if a car accident led to a completely healthy person dying in the hospital from a complication, you wouldn’t exclude the car as the cause of death just because the car did run over the person while he or she was inside the hospital. Similarly, if a patient caught the SARS-CoV2, developed a pneumonia and lung damage, and then suffered respiratory failure, respiratory failure may have been the immediate cause of death. But you’ve still got to list Covid-19 as a cause as well. Things can get even more complex when other organs are involved like when sepsis, kidney failure, and strokes result. It may take time for problems to evolve so a death may occur long after the initial infection.

7. The lack of a clear national definition of Covid-19 death.

Back in May Noah Weiland, Maggie Haberman and Abby Goodnough penned an article for the New York Times entitled, “Trump Suggests Virus Death Count Is Inflated. Most Experts Doubt It.” If anyone in the Trump administration continues to question the number of deaths, here’s a suggestion. Come up with a very clear and transparent definition of a Covid-19 death. Have it properly reviewed and vetted by the scientific community. Release this definition at a press conference so that everyone can see your definition.

8. Conspiracy theories and political motivations have been clouding the discussion.

And now we come to a big reason why there haven’t been more accurate Covid-19 death counts: conspiracy theories. Matt Perez initially covered such conspiracy theories for Forbes back on May 10 in an article entitled, “Death Toll Conspiracy: Why Conservative Media—And Soon, Possibly Trump—Are Doubting Coronavirus Mortality Figures.” That was back when the reported U.S. death toll was around 80,000 or so.

When the reported number of deaths approached 100K, Alex Berenson tweeted the following:

Then, after his former employer, the New York Times, published a list on its front page of people who have died from Covid-19, Berenson tweeted the following:

And gun shot wounds? Where exactly is the evidence that people have been counting gun shot wounds as Covid-19 deaths? Doctors don’t tend to miss gun shot wounds when examining patients. They don’t usually ask “is that a mole on your chest or a potentially fatal gun shot wound?” The massive bleeding is typically a give away.

Plus, patients won’t typically say at the end of a doctor’s visit, “oh yeah, by the way, I forgot to mention that potentially fatal gun shot wound that I just suffered. A little help please.” Even if you were to have included every single gun shot wound death as a Covid-19 death over the course of the pandemic, that would have only account for an additional 18,000 or so deaths. This assumes that an average of 37,603 people die from gun violence over the course of a year.

Let’s say you were to subtract all the deaths that Berenson questioned. This wouldn’t change the fact that the Covid-19 death count in the U.S. has already gone well beyond the “not a big deal” level. Continuing to claim that the reported death count is being overestimated is a bit like claiming that not all of your house is currently on fire. Sure maybe that “Hello Kitty” collection hidden in your closet doesn’t yet look like flaming S’mores, but it doesn’t mean that things are going well.

Pushing unfounded conspiracy theories ends up wasting everyone’s time. Doing so distracts from real work that needs to be done. If you are questioning the current death tallies, then commit the time and resources to help public health officials improve the counts.

Ultimately, deaths are only one measure of the severity of an infectious disease outbreak, epidemic, or pandemic. For example, there are the associated medical costs, the lost productivity, and the suffering as well. It is already clear that the Covid-19 coronavirus is a major threat and that more needs to be done to contain the virus in the U.S. There is plenty of evidence that the spread and impact of the virus has been much greater in the U.S. than in many other countries like Australia, South Korea, Taiwan, New Zealand, and Germany that have implemented more coordinated and vigorous responses. The U.S. has about 4.25% of the world’s population yet accounts for a fifth of the approximately one million reported worldwide Covid-19 deaths. Such numbers just don’t add up favorably for the U.S. response to date.