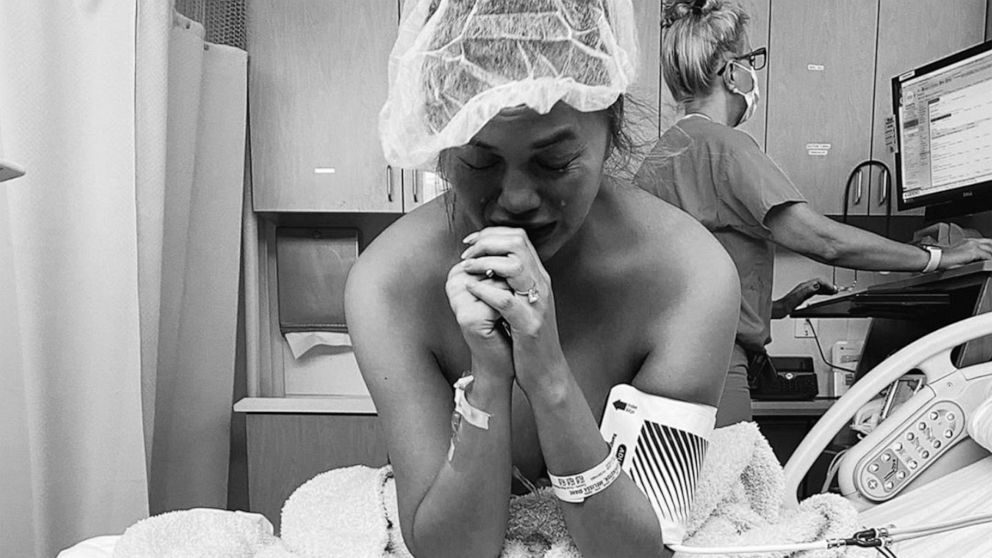 Chrissy Teigen’s recent announcement that she’d suffered a second-trimester pregnancy loss shocked her fans, not just because the news was devastating but because of the heartbreaking photographs and caption she shared to social media.

The model, who was expecting her third child with singer John Legend, had been giving her 32 million Instagram followers regular updates about her complicated pregnancy, including details of her recent hospitalization and needing two blood transfusions.

And then, on Wednesday night, she posted four black-and-white images that laid bare the pain of her loss and the physically taxing process of childbirth, along with a note to the “little guy” she and Legend named Jack.

“To our Jack – I’m so sorry that the first few moments of your life were met with so many complications, that we couldn’t give you the home you needed to survive,” she wrote. “We will always love you.”

The post generated an avalanche of support, with more than 10 million people “liking” it and thousands leaving comments. And despite the fact that some openly questioned Teigen’s rationale for opening up about the experience, experts told “Good Morning America” that her bravery could help remove some of the stigma associated with pregnancy loss.

Pregnancy loss is disturbingly common in the United States, though it remains a taboo topic of conversation for many. Typically, medical professionals use the term “miscarriage” when referring to a loss before 20 weeks gestation, while “stillbirth” is used to describe a loss at 20 weeks or later. The American College of Obstetricians and Gynecologists reports that at least 10% of clinically recognized pregnancies end in miscarriage, though that number is likely higher because many women miscarry before they’ve confirmed they’re expecting. Stillbirth is considered by ACOG to be “one of the most common adverse pregnancy outcomes,” affecting 1 in 160 deliveries in the United States every year, or about 23,600 babies.

Ivy Margulies, a Los Angeles-based a clinical psychologist who specializes in pregnancy and infant loss, told “Good Morning America” the main reason many women don’t discuss their losses is because they feel guilty about them.

“They feel like they failed, their body failed and their body didn’t protect their baby — it didn’t do what it was supposed to do,” she said. “They feel culpable and like it’s their fault. It’s so emotionally complicated.”

Most of the time, no one is to blame. ACOG reports that 50% of miscarriages are due to a chromosomal abnormality, while “a significant portion” of stillbirths remain unexplained.

“It is very rare that anyone is at fault for a pregnancy loss. It is almost never the fault of the mom,” said Dr. Elizabeth Langen, a practicing OBGYN and clinical associate professor at the University of Michigan. “Women often ask about what they ate or how much they did or did not exercise and if that made a difference. As much as we want everyone to be as healthy as possible, these decisions do not cause pregnancy loss. I really want women to know it is not their fault.”

Teigen has not explained what exactly happened with her pregnancy, though she did tell fans just days ago that bleeding issues involving her placenta had persisted for weeks. Last Sunday, the model, who said she was about halfway through her pregnancy, had to be hospitalized due to excessive blood loss.

“Basically he’s the strongest, coolest dude in the s——-t house. His house is just falling apart,” she said. “It didn’t have a good foundation to begin with, though. He didn’t have the strongest chance at the very, very beginning.”

Teigen has never shied away from personal topics, having previously discussed her infertility treatments and her struggle with postpartum depression. Her forthcoming approach to her pregnancy loss is a “gift for women,” according to Dr. Nita Landry, an OBGYN in Los Angeles. “To a lot of women who never came forward and spoke about it, she’s saying, ‘It’s OK to feel what I’m feeling. This is normal,'” Landry said.”Until we can have those open, honest conversations, a couple things will happen: number one, there will continue to be misinformation and number two, women will continue to suffer in silence, which is unacceptable.”

Several experts agreed that Teigen’s status as a wealthy celebrity further dispels the myth that pregnancy loss only impacts a certain type of person, and Dr. Jacques Moritz, and OBGYN and the medical director of the Tia clinic in New York City, added that she’s making it easier for society at large to discuss a topic that often feels too uncomfortable or sad to touch on.

Moritz added that when tennis star Serena Williams went public with her harrowing childbirth ordeal — she sustained a pulmonary embolism the day after her emergency cesarean section — she “changed the narrative on maternal mortality.”

“She brought a lot to the forefront and had people talking,” he said. “At every medical conference they always bring up Serena Williams.”

And although some criticized Teigen’s decision to photograph her experience, Gina Harris, the chief executive officer of Now I Lay Me Down To Sleep, a nonprofit that provides heirloom-quality photos of stillborn babies to grieving parents, said having physical proof of the baby’s existence matters.

“We have photographed more than 50,000 sessions over the last 15 years around the world, and we have never had a family regret getting their photographs,” she said. “People are seeing that it’s OK to acknowledge and honor the baby and it’s OK to grieve. The photographs give a face and a name to the babies.”

Some also questioned whether it was appropriate for Teigen to share the images, but Margulies argued that there is no right or wrong way to grieve.

“Honoring the baby in any way is normal,” she said. “You’re witnessing something so intimate and personal, but unfortunately, so many women go through that. I guarantee [Teigen] is helping many, many, many people to help process their grief and trauma.”

Social media can change the way we discuss pregnancy loss

Since the advent of social media, countless users have found communities to help them with various personal struggles, and when Teigen came forward about her loss, many others did too. “Oh, momma. It hurts. I’ve been there. My Maya’s birthday is Monday, stillborn at 21 weeks. Breathe, hug Miles and Luna, lean on your people. Sending you love and healing,” wrote one person on her announcement. Added another: “It’s unbearable pain and feels terribly unfair. I’ve also been there, losing my son Leo who was born far too early thanks to a poorly functioning placenta. It’s an awful club to be part of, but from one mother who continues to grieve the loss of her son to another, I’m am so very sorry for what you’ve had to endure.”

Landry applauded Teigen’s use of her platform, especially, she added, because so many public figures use Instagram as a way to share a “highlight reel” of their lives. “[She essentially said], ‘I’m willing to subject myself and my family to the thoughts and opinions of people who will judge me, but I’m willing to do that because I know how many women this will help,'” she said. “As an OBGYN who has wiped countless tears from women who have experiences [like this], I commend Chrissy and every person who has a platform who makes the decision to uplift and educate others.”