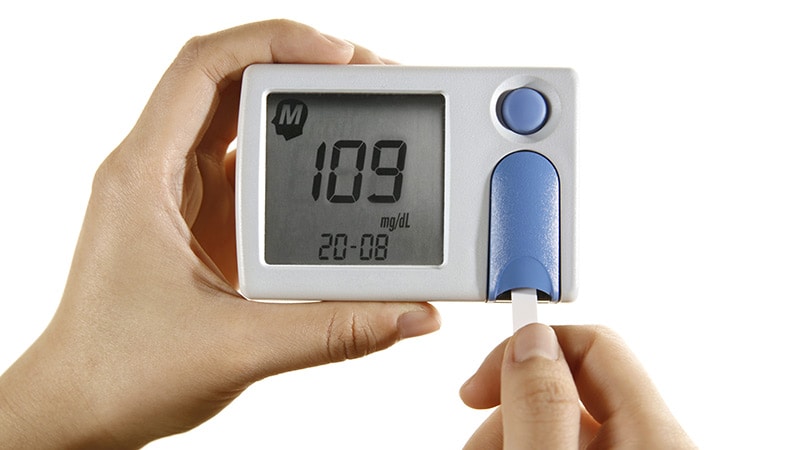 Patients with type 2 or type 1 diabetes who stay in a blood glucose range of 70-180 mg/dL at least 70% of the time have the lowest rates of major adverse coronary events, severe hypoglycemic episodes, and microvascular events, according to a post hoc analysis of data collected from 5,774 patients with type 2 diabetes.

Data collected by the DEVOTE trial showed that every additional 10% of the time that a patient with type 2 diabetes (T2D) spent in their target range for blood glucose linked with a significant 6% reduced rate for developing a major adverse cardiovascular event (MACE), Richard M. Bergenstal, MD, said at the virtual annual meeting of the European Association for the Study of Diabetes.

For every 10% increase in time in range (TIR), patients showed an average 10% drop in their incidence of severe hypoglycemic episodes.

These findings confirmed a prior post hoc analysis of data collected in the DCCT trial (NCT00360815), which were published in the New England Journal of Medicine, although those results showed significant relationships between increased TIR and decreased rates of retinopathy and microalbuminuria. For every 10% drop in TIR, retinopathy rose by 64% and microalbuminuria increased by 40%, according to a post hoc analysis of the DCCT data that Dr. Bergenstal helped run and was published in Diabetes Care.

“It’s becoming clear that time in range is an important metric for diabetes management, and our new findings and those previously reported with the DCCT data make it look like time in range is becoming a good marker for clinical outcomes as well,” said Dr. Bergenstal, an endocrinologist at the Park Nicollet Clinic in Minneapolis.

“It’s a new concept, getting time-in-range data,” said Dr. Bergenstal, who was a coauthor of recommendations from Diabetes Care that were made in 2019 by an expert panel organized by the Advanced Technologies & Treatments for Diabetes Congress. “We think this will be a good marker to keep glycemia in a safe range, and the results look positive.” Patients who stay in the blood glucose range of 70-180 mg/dL (3.9-10.0 mmol/L) at least 70% of the time generally have a hemoglobin A1c of about 7%, which is what makes it a good target for patients and clinicians to focus on. Patients with a 50% TIR rate generally have an HbA1c of about 8%.

But a TIR assessment can be more informative than HbA1c, said the 2019 recommendations document. It called TIR assessments “appropriate and useful as clinical targets and outcome measurements that complement A1c for a wide range of people with diabetes.”

The analysis run by Dr. Bergenstal and his associates used data from 5,774 of the 7,637 patients enrolled in the DEVOTE trial, for whom adequate longitudinal blood glucose data were available to derive and track TIR. DEVOTE had the primary aim of comparing two different types of insulin in patients with T2D, according to its explanation in the New England Journal of Medicine. The DEVOTE patients did not undergo routine continuous blood glucose monitoring, so derivation of TIR was the only option with the dataset, Dr. Bergenstal said. “We’re trying to get continuous blood monitoring into T2D trials,” he said.

The post hoc analysis showed that, during the study’s follow-up of just under 2 years, patients who maintained a derived TIR of 70%-100% had about a 6% MACE rate, which peaked at nearly twice that in patients whose TIR was 30% or less. The analysis showed a roughly positive linear relationship between TIR and MACE rates across the range of TIR values. In an adjusted analysis, patients with at least a 70% TIR had a significant 31% lower rate of MACE events, compared with patients whose TIR was 50% or less.

He also reported less extensive data on microvascular events. In an adjusted analysis, patients with a TIR of at least 70% had a significant 40% cut in these events compared with patients with 50% or less TIR.

DEVOTE was funded by Novo Nordisk. Dr. Bergenstal has had financial relationships with Novo Nordisk and several other companies.

This article originally appeared on MDedge.com, part of the Medscape Professional Network.