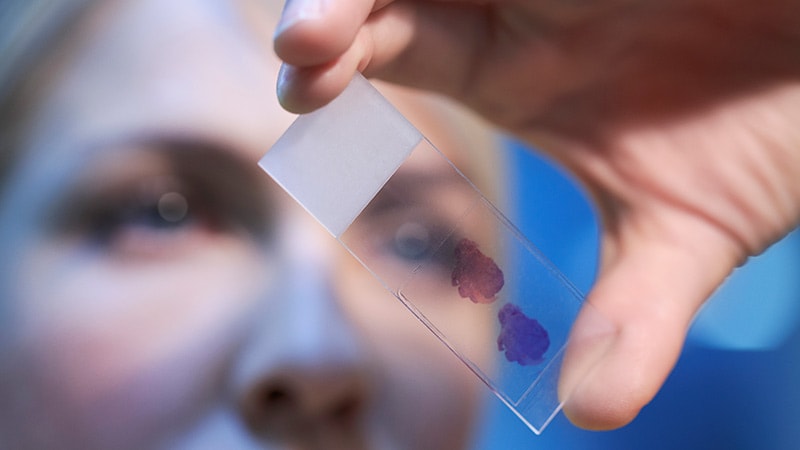 Tissue tumor mutation burden (tTMB) has been under study for some time as a biomarker that could predict which patients are most likely to respond to immunotherapy.

In June, it was approved by the US Food and Drug Administration as a biomarker for pembrolizumab (Keytruda) use in patients with advanced cancers who have progressed on prior therapy.

Now the data supporting that approval have been published in Lancet Oncology.

They come from analysis of outcomes from 790 patients who participated in the phase 2 KEYNOTE-158 study of treatment with pembrolizumab in 10 tumor-type-specific groups.

The results show better responses in patients who had a high tissue TMB (≥10 mutations per megabase), which was found in 102 (13%) of the 790 participants.

The majority of these patients (87%) did not have high tTBM.

An expert not involved with the study was enthusiastic about the results.

“This gives clinicians treating patients with any metastatic solid tumor the possibility of offering immunotherapy with pembrolizumab to those whose tumors have a TMB greater than 10 mutations per megabase,” said Matthew R. Zibelman, MD, assistant professor, Department of Hematology/Oncology, Fox Chase Cancer Center, Philadelphia, Pennsylvania.

“The real win here is not for clinicians but for the patients who may get access to this drug with an opportunity for a meaningful response, ” he said.

“Currently, its use as a predictive marker to choose treatment remains investigational in most clinical settings,” Zibelman told Medscape Medical News. “This testing is becoming standard in most commercially available next-generation sequencing platforms offered, and has been looked at as a potential biomarker in several tumors, including non-small cell lung cancer and melanoma,” he added.

Zibelman suggested that the results should now be implemented into clinical practice. “Testing should be offered to all patients with metastatic solid tumors, particularly those without prior approvals for immunotherapy agents specific to their indication,” he said.

“The higher the TMB, the greater the number of neoantigens expressed by the tumor, enhancing the probability of cancer cells being recognized by the immune system. This simple but captivating rationale likely underlies the clear advantage from pembrolizumab treatment found for patients with tTMB-high tumors, in terms of objective response and duration of response,” writes Melissa Bersanelli, MD, Medical Oncology Unit, University Hospital of Parma, Italy, in an accompanying editorial.

The authors showed the usefulness of tTMB status even in tumors that are well known to be poorly immunogenic, such as small cell lung cancer, she noted.

However, in this setting of rare tumors where there are few viable options and limited pivotal trials, “an assessment of the cost–benefit ratio of a treatment is especially crucial to properly allocate resources, and a sustainability analysis is needed,” Bersanelli says.

“In view of the scarce benefit evidenced for patients with non-tTMB-high tumours, in such cases, the option of the best supportive care should be preferred,” she adds.

Among those who had evaluable post-baseline image assessments, 53 (58%) in the tTMB-high group and 214 (35%) in the non-tTMB-high group had a reduction in tumor dimensions from baseline.

The authors noted that the TMB score was not associated with PD-L1 combined positive score, either for the entire efficacy population (P = .18) or among patients who had a response (P = .07), or for those who did not respond to treatment (P = .15).

Also weighing in on the study, Thomas U. Marron, MD, PhD, assistant director of Early Phase and Immunotherapy Trials at the Tisch Cancer Institute at Mount Sinai Hospital, New York City, explained that these results are not really practice-changing.

“When patients progress on first-line therapy, we do look at a lot of different information sources such as specific tumor mutations, mutation burden, and PD scores, to help inform second-line treatment,” he said.

But looking at the tumors represented in this study, most notably small cell lung cancer, he added, “We are already treating these patients with chemoimmunotherapy, with PD1 blockade as first-line therapy. It is now given as either first- or second-line therapy in all of these malignancies.”

Marron noted that there has been a lot of “back and forth” with TMB, and that the rationale why TMB should predict responses to immunotherapy is very straightforward. “The more antigens you have that your immune system is capable of recognizing, the better [chance], theoretically, that the more immunogenic your tumor will be.”

He added that there still isn’t a clear understanding as to which mutations are going to be immunogenic, and “that’s why we’re seeing so many different responses here in this study.”

“But we are going to use immunotherapy, regardless, as we accumulate prospective real-world data and learn how to use TMB,” Marron said.

In the editorial, Bersanelli noted that tTMB was not associated with PD-L1 expression. This suggests the “potential of combining these factors, possibly together with the tumor microsatellite status, into a biomarker score to improve the predictive ability of each individual biomarker.”

The study was funded by Merck Sharp & Dohme Corp. Several of the authors have disclosed relationships with industry as noted in the original article. Bersanelli reports grants from Roche, Seqirus UK, Pfizer, and Novartis and personal fees from Bristol-Myers Squibb, Pfizer, Novartis, and AstraZeneca.