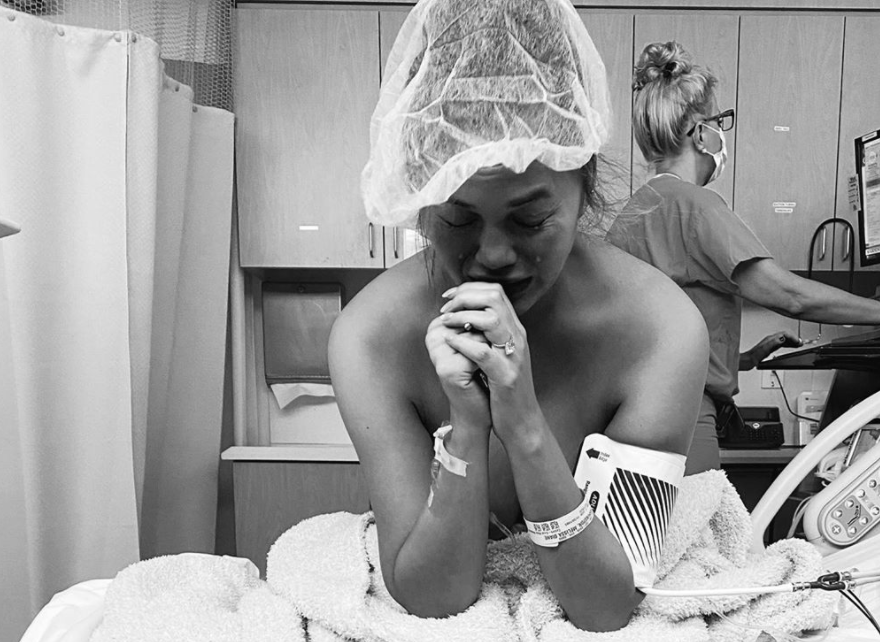 Early this morning, October 1st, Chrissy Teigen posted to Instagram to inform her followers that she and husband John Legend sadly lost their unborn son, whom they had begun calling Jack. In her post, Teigen included five gut-wrenching photographs from the night they lost Jack, which has caused some controversy among people who are questioning whether the star should have posted intimate photos from such a personal trauma. However, many people who have been through the same grief Teigen and Legend say yes, and are now opening up about their own losses.

“On this darkest of days, we will grieve, we will cry our eyes out,” Teigen wrote in the caption of her Instagram upload. “But we will hug and love each other harder and get through it.”

October is Pregnancy & Infant Loss Awareness Month, a time of the year to raise awareness about stillbirth, miscarriage, SIDS, or any other cause of death of an unborn child or infant. According to Star Legacy Foundation, infant death and pregnancy loss affects tens of thousands of families across the United States, and yet the topic is one that is rarely talked about.

By visually letting others in to feel her pain despite it being such a personal tragedy, Teigen has, perhaps unknowingly, caused a massive crack in the foundation of the stigma attached to pregnancy loss.

Since her post went live, mothers, fathers, families, and friends have noted that they’ve found it easier to talk about their experiences with pregnancy loss and infant death. Some have even shared their own photos depicting their trauma and eventual recovery.

“In solidarity with our patron saint of honesty, @chrissyteigen, I share the only “hidden” photo on my phone,” Twitter user Justine Harman tweeted on Thursday. “1/8/18, the day I found out—alone at the hospital—that my baby didn’t have a heartbeat. It hurt like absolute, smoldering hell. And then I hid it. Thank you, Chrissy.”

In solidarity with our patron saint of honesty, @chrissyteigen, I share the only “hidden” photo on my phone. 1/8/18, the day I found out—alone at the hospital—that my baby didn’t have a heartbeat. It hurt like absolute, smoldering hell. And then I hid it. Thank you, Chrissy. pic.twitter.com/S2K04W18gm

Another user, referring to the backlash Teigen has received for sharing photos from the loss, wrote, “For those people who have vicious and nasty things to say to and about Chrissy, her sharing was not for you. It’s so that our pain is not taboo.”

Sharing your pain and vulnerability like that is beautiful, Justine. Nobody on here knows me, but I have also had a late miscarriage. For those people who have vicious and nasty things to say to and about Chrissy, her sharing was not for you. It’s so that our pain is not taboo.

“Last month we celebrated our baby boy’s would be 18th birthday,” another user, Kmo, shared. “The sorrow dims but never disappears.”

Last month we celebrated our baby boy’s would be 18th birthday. The sorrow dims but never disappears. The space he left behind hurts less but will never be filled. I wonder often about what might have been if our family’s story would have been different. pic.twitter.com/pDklS77nzy

People are telling Chrissy Teigen to keep the loss of her baby private.

There is nothing taboo about a miscarriage. It is a tragedy, and a terrible loss, however, it should not be stigmatised, and women should not be made to feel ashamed.

Several people noted that the photos Teigen shared further drive home the hollowness one feels after losing a child, and the want to capture those fleeting moments is a practice that is common and should be normalized.

There are professional photographers in maternity wards in hospitals. You can ask them to take photos of you after the birth, and they’re there to take photos if your baby didn’t survive too. This is normal! It’s not a ‘influencer’ thing jfc I’m 😡

My mother has beautiful photos from the day my sister died. She was 10 days old, my parents bathed her & dressed her in something other than a diaper for the first time, & got photos taken. We also took photos of everyone holding her that day. https://t.co/PmyOVePSzC

These photos weren’t just taken because Teigen is an influencer and celebrity. In fact, many hospitals and private organizations alike offer this service to families suffering with the loss of a child.

It’s common for families who suffered a stillbirth or late miscarriage to take photos like the ones Chrissy Teigen shared. Orgs like @nilmdtsHQ and hospitals offer photo services to memorialize the loss and help parents cope with their grief. There’s nothing weird about it.

And if anyone who is side-eying Teigen’s choices in any way needs a reminder, “IT IS NOT YOUR JOB TO POLICE HOW PEOPLE GRIEVE,” Twitter user Maria Del Russo clarified.

An important point that it’s unfortunate we have to clarify. A lot of parents choose to do this, as it’s hard to hang on to memories during a time that’s an emotional blur.

Also, and this is important, IT IS NOT YOUR JOB TO POLICE HOW PEOPLE GRIEVE. https://t.co/I9UoxXoSVl

Teigen has always been open and honest about pretty much everything in her life, but her candidness surrounding her pregnancy loss is especially meaningful. The pain she feels is a pain that’s been felt by so many others, and it should not be a pain any of us should suffer with alone.

If you or someone you know if going through a similar loss, you can contact a resource like Through the Heart or or SAMHSA’s National Helpline for immediate support.