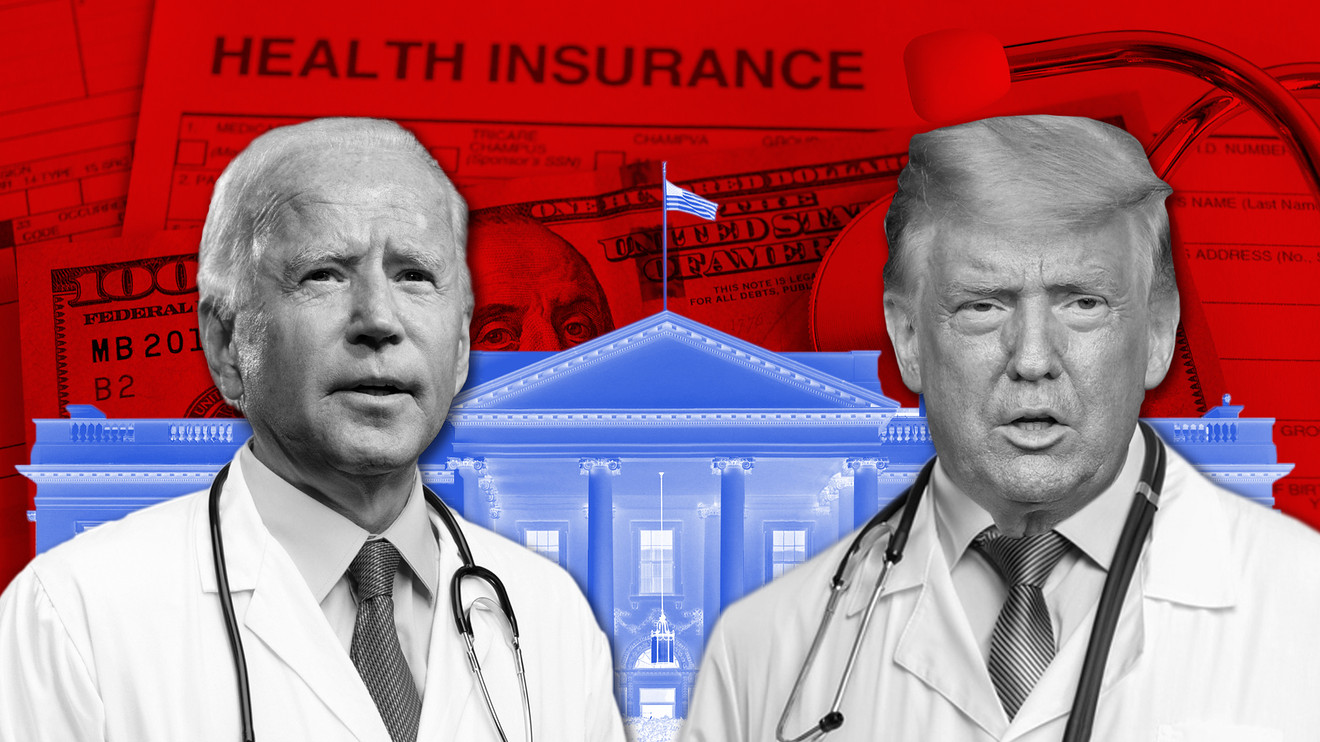 President Donald Trump and Democratic challenger Joe Biden are blasting each other over their approaches to health care — long a top issue for voters, and now even more in focus as Americans deal with the coronavirus crisis.

The two White House contenders have big differences on Obamacare and Trump’s handling of the COVID-19 pandemic, but they do have some things in common on health-care matters.

Polls suggest Biden has the advantage on health care, with a recent KFF-Cook Political Report survey finding that swing voters in three battleground states preferred the Democratic nominee over the Republican incumbent when it came to this issue.

But how do Trump and Biden’s stances sit with you? To help with that, here’s a brief look at where they’ve positioned themselves on a few key health-care topics.

a decade ago, when the longtime politician was President Barack Obama’s vice president.

The Trump administration is waging a legal fight against Obamacare, arguing that it must be scrapped after federal lawmakers in 2017 zeroed out the individual mandate’s penalty for lacking health insurance. That comes after the failure of Trump and the GOP’s efforts to repeal Obamacare, with the late Republican Sen. John McCain of Arizona casting a decisive vote at one point in 2017.

Biden and Trump are both being pulled by a wing of their party on medical coverage, said Kim Monk, an analyst and managing director at Capital Alpha Partners.

Progressive Democrats got Biden to “do a proposal that I think for them is a foothold in the door for a more expansive agenda that gets them closer to ‘Medicare for All,’” she told MarketWatch.

Biden is pledging to deliver a public-health insurance option, while “Medicare for All” (which was backed by many of his unsuccessful opponents in the Democratic presidential primary) would be a government-run program that replaces the private health insurance system. He also says he’ll lower the Medicare eligibility age to 60 from 65.

“While the perceived threat of a broad government-run ‘public option’ would threaten managed-care companies and hospitals, we believe the actual result will be something both managed care and hospitals
IHF,

can live with,” Raymond James analysts said in a recent note.

Meanwhile, Trump “has been convinced by the right wing of the party that if they can somehow undo Obamacare, they can sweep in with more market-based reforms, while still protecting pre-existing conditions,” Capital Alpha’s Monk said. But there is no clear GOP consensus on an Obamacare replacement, and Trump’s recent executive order intended to protect those with pre-existing conditions does nothing legally and just proves he’s “feeling some pressure,” she added.

Trump last week signed the executive order in an effort to address the concerns of Americans with such conditions who have health-insurance protections because of Obamacare and fear those safeguards will disappear. That came as he announced an “America First Healthcare Plan” and $200 discount cards for Medicare recipients in a speech that conflated some of his administration’s achievements with policies that are in stages of implementation and others that remain aspirational.

“So many lives lost unnecessarily because the president is only worried about the stock market
SPX,

and his re-election,” Biden said in a speech on Sept. 18 in Minnesota. “He’s not protecting America.”

The Democratic nominee also has said he’ll “support rather than tear down the experts” and talked about implementing a national mask mandate.

Trump has given himself an “A+” on handling the pandemic, but just a “D” on public relations “because I have fake news.” He has touted his Jan. 31 travel restrictions on China, which had the first COVID-19 hotspot, and harped on Biden saying he would shut down the economy again to stop the spread of the coronavirus if experts recommended it.

Trump has also defended himself after storied journalist Bob Woodward reported that the president acknowledged playing down the pandemic in its early days, with Trump saying he was trying prevent a panic.

Monk said she thinks the Trump administration and Congress have done “an extraordinary amount, both in terms of tackling COVID directly and in terms of the economic impact,” and she praised the “Operation Warp Speed” public-private partnership that aims to accelerate vaccine development. But she said there were “missteps in the beginning,” and the No. 1 problem for Trump has been communications.

“Starting with him. I mean just stepping on the message, confusing the message, suggesting political interference in the FDA. That’s just been the biggest problem,” she said.

Related:Trump lashes out amid pandemic at medical research that’s discordant with his views

And see:How Congress is spending trillions in response to the coronavirus crisis — in one chart

The August jobs report suggested an economic recovery from the coronavirus recession is still plowing ahead even if the pace of growth has slowed since the start of the summer, as the release showed the U.S. unemployment rate fell to 8.4% last month. About $5 trillion has been spent or committed in response to the pandemic and economic crisis, according to the Center for a Responsible Federal Budget’s COVID Money Tracker.

Drug prices, surprise billing: Both Biden and Trump have made pledges to tackle rising prices for prescription drugs. And they’ve addressed surprise billing, the high fees charged after a procedure due to discrepancies in insurance coverage and other issues.

The president has talked up his recent executive orders on drug pricing, though analysts have dismissed them as “largely campaign fodder as each contains limitations or caveats, and is subject to further action.”

Drug pricing “definitely is a priority for both parties,” Monk said. Biden is likely to be pushed to do something that looks like the drug-pricing bill that passed the Democratic-run House last year, but the measure wouldn’t be able to pass even a Democratic-controlled Senate due to opposition from moderate Democrats, she predicted. Some analysts have described the bill as “nuclear winter” for drug makers
PJP,
.

To address surprise billing, a president “can’t do it with an executive order, or even with a regulation,” Monk said. “It’s going to require Congress to act to do it significantly.”