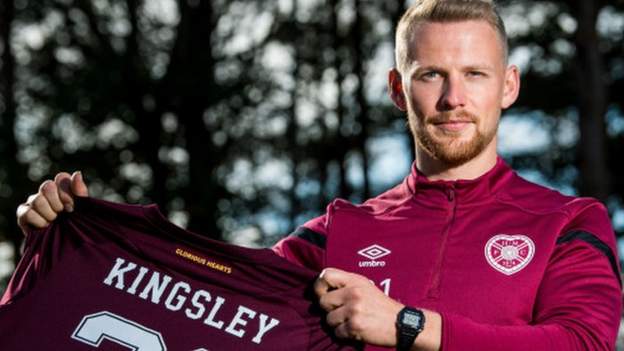 Hearts signing Stephen Kingsley believes he is “in a good position now” after injury and mental health issues blighted his time with Hull City.

The 26-year-old made only eight appearances last season for Hull, who were relegated from the Championship, and was released this summer.

He recently compared his hip trouble to that of Kieran Tierney and Andy Murray.

“It’s made me more resilient as a person, which you have to be,” left-back Kingsley says.

“Obviously everyone goes through struggles as a player. I don’t think people outside football realise how difficult it is with your mental health when you are dealing with injuries, especially long-term injuries.

“But it certainly is something you have to deal with, learning how to deal with it and handling that disappointment at times and using it and harnessing it in the right way and not letting it affect you.”

Kingsley, who has one cap for Scotland, began his career with Falkirk before joining Swansea City and made his debut in a 2-1 win over Arsenal at The Emirates in 2016.

“It was a really special day – not just in my career but in my whole life,” he says. “It was said to me on the Monday night that I was starting on the Tuesday. It’s a bit of a blur just now looking back on it, but we ended up winning 2-1. It was such a crazy time.”

Kingsley, who had loan spells with Yeovil Town and Crewe Alexandra while at Swansea, believes joining Hearts can revive his career, despite his new club being in Scotland’s second tier.

“It’s a massive club,” he said. “I have been in and around first-team football now for around 10 years, I’m in a good position now, still only 26, and I have got a long road ahead of me. If I can get some game time here and get back on track.”

Swansea decided against offering Kingsley a contract extension and he arrives at Tynecastle as a replacement for Aaron Hickey, the 18-year-old sold to Bologna in the Italian top flight.

“I heard he is doing really well over there as well,” he adds. “That’s great for him. I was at that stage when I was young and joined Swansea. I know for a fact he will love it and enjoy the experience of being in a different environment. It’s brilliant for him.”