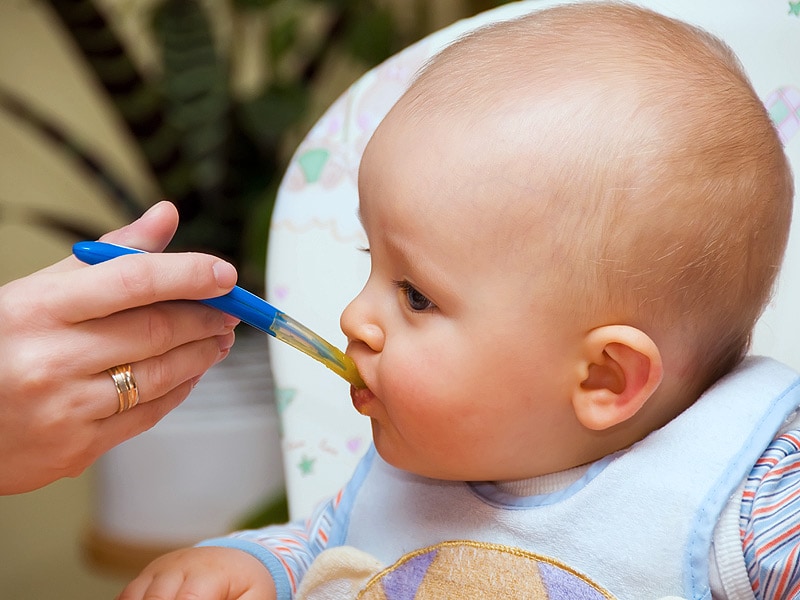 Introducing high amounts of gluten into a baby’s diet could prevent them from developing coeliac disease, according to a study.

The strategy could have implications for other autoimmune diseases, say the research team led by King’s College London (KCL), but further studies would be needed before it could be applied in practice.

Current advice is that babies should not be introduced to solid food until they are around 6 months old.

The study, published in JAMA Paediatrics, was a secondary analysis from the Enquiring About Tolerance (EAT) study – a randomised trial of the early introduction of allergenic solids into a baby’s diet.

Around half of 1004 babies from England and Wales were given 4g of wheat-protein as wheat-based biscuits per week when they were aged between 4 and 6 months. This was equivalent to a gluten dose of approximately 3.2 g/week, or 500 mg/d, although no upper limit was put on consumption.

Overall, 96.8% of these babies were also being breastfed up until the age of 6 months.

Gideon Lack, professor of paediatric allergy at KCL, said: “This is the first study that provides evidence that early introduction of significant amounts of wheat into a baby’s diet before 6 months of age may prevent the development of coeliac disease.

“This strategy may also have implications for other autoimmune diseases.”

Co-author Dr Kirsty Logan, a researcher in paediatric allergy at KCL, said: “Early introduction of gluten and its role in the prevention of coeliac disease should be explored further, using the results of the EAT study as the basis for larger clinical trials to definitively answer this question.”

Random Results ‘Cannot Be Ruled Out’

Commenting to the Science Media Centre, Dr Baptiste Leurent from the London School of Hygiene and Tropical Medicine, praised the authors for a “well conducted study” but said that because the comparison involved small numbers, the results “could have happened by chance alone”.

Dr Leurent, who is an assistant professor in medical statistics, said: “Typically, a result that has more than 5% chance to have happened by chance alone is not considered sufficient evidence – here we are just below this threshold, at 2%.

“In other words, even if food introduction had no effect, there was around a 2% chance for these seven children to end up in the same group.”

He added: “Other studies have found an effect toward the other direction, and it is therefore too early to suggest any change in the baby’s diet to the public.  However, it is an interesting finding, which definitely needs further exploration, as the study authors acknowledge.”

Alastair Sutcliffe, professor of general paediatrics at University College London, agreed that the findings could be random because of the low numbers included in the study. However, “There is little evidence around the topic and thus this study is both novel and welcomed,” he said.