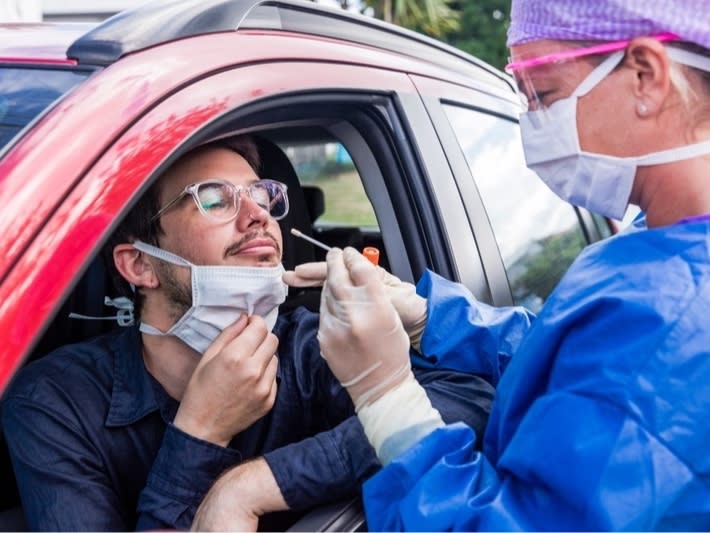 ATLANTA, GA — Georgia, one of the early hotspots for spread of the coronavirus, continued to show shrinking numbers in Monday’s report from the state health department.

Only 806 newly confirmed cases of COVID-19 were reported, along with only 30 deaths. In addition, only 29 new hospitalizations were reported.

At the same time, much of the nation’s midsection is just now seeing a surge. According to The New York Times, Utah, for example, reported 1,387 newly confirmed cases of COVID-19, a single-day record. Also, Wisconsin, Indiana, Montana and Wyoming have added more cases in the last week than they had in any other week since the pandemic began.

With early hotspots cooling and less populous areas heating up, the net effect has been a slow rise in the total number of new cases across the nation, according to the Times.

“I’m actually disturbed and concerned about the fact that our baseline of infections is still stuck at around 40,000 per day,” Dr. Anthony Fauci, said Monday on CNN. “That’s no place to be when you’re trying to get your arms around an epidemic.”

The Georgia Department of Public Health in Atlanta reported a total of 323,714 confirmed cases of COVID-19 at 2:50 p.m. Monday, Oct. 5. According to the health department’s website, that includes only 806 newly confirmed cases over the last 24 hours.

Georgia also reported 7,192 deaths so far from COVID-19, with 28 more deaths recorded in the last 24 hours. In addition, the state reported 28,987 hospitalizations — 29 more than the day before — and 5,370 admissions so far to intensive-care units.

No information is available from Georgia about how many patients have recovered.

Counties in or near metro Atlanta and other metropolitan areas continue to have the highest number of positives, with Fulton County still in the lead. The three hardest-hit counties all hit milestones Monday, with Fulton and Gwinnett counties surpassing 28,000 positives and Cobb County surpassing 20,000.

Counties in or near metro Atlanta also continue to have the most deaths from COVID-19.

As of Monday, Georgia has administered more than 3.3 million COVID-19 tests, with about 9 percent of those tests the less reliable ones used to detect antibodies.

As more Georgians were tested over the last month, the percentage of positive tests inched upward from about 8 percent to more than 10 percent. However, over the last few weeks, the percentage of positives has stabilized at about 10 percent. According to the World Health Organization, positive test results should no more than 5 percent for two weeks before reopening for business as usual. Georgia largely reopened for business in April and May, and since then Gov. Brian Kemp has promoted the use of face masks but has steadfastly refused to mandate them.

All Georgia statistics are available on the state’s COVID-19 website.

In the United States, more than 7.4 million people have been infected and more than 210,000 people have died from COVID-19 as of Monday. The U.S. has only about 4 percent of the world’s population but more confirmed cases and deaths than any other country.

This article originally appeared on the Dallas-Hiram Patch