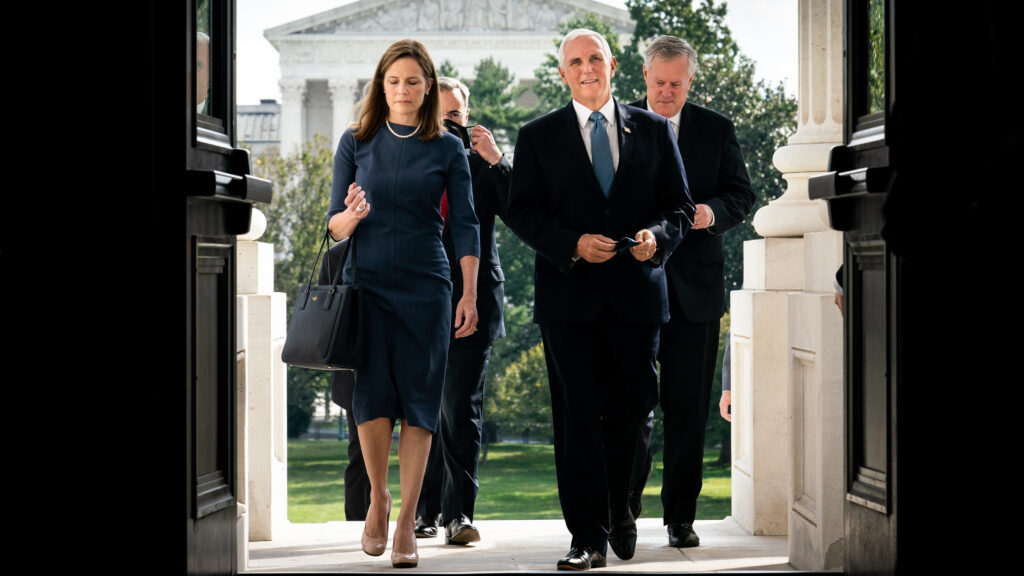 If President Trump’s Covid-19 infection was a wake-up call in Washington, not everyone appears to have heard it.

Vice President Mike Pence is continuing public activities, even though he was at the Sept. 26 White House ceremony where Amy Coney Barrett’s nomination to the Supreme Court was announced and where multiple members of the president’s inner circle — and perhaps even the president himself — appear to have been infected. Pence sat directly in front of Sen. Mike Lee (R-Utah) and within a few feet of Sen. Thom Tillis (R-N.C.), both of whom announced on Friday that they had tested positive for the virus.

Sen. Ron Johnson (R-Wis.) was tested for Covid-19 but still decided to attend a Republican event in his home state Friday night. By the following day, he announced he had contracted the virus, suggesting he may have spread it further at the Friday gathering. Despite having tested positive, Johnson continues to oppose Wisconsin’s mandatory mask mandate, telling the Wisconsin State Journal that masks are “certainly not a cure-all.”

Three Republican congressmen who traveled with the president on Air Force One last week — on the flight during which Trump senior adviser Hope Hicks was ill — flew back to Minnesota on a commercial flight on Friday, despite having been in contact with the president.

And Sunday afternoon, Trump himself left Walter Reed National Military Medical Center for a brief drive-by to wave to supporters outside the facility. The president and Secret Service agents in his vehicle were all wearing masks — but that may not be enough protection, according to James Phillips, chief of disaster medicine at George Washington University School of medicine and an attending physician at Walter Reed.

“That Presidential SUV is not only bulletproof, but hermetically sealed against chemical attack. The risk of COVID19 transmission inside is as high as it gets outside of medical procedures,” Phillips tweeted. “Every single person in the vehicle during that completely unnecessary presidential ‘drive-by’ just now has to be quarantined for 14 days. They might get sick. They may die. For political theater. Commanded by Trump to put their lives at risk for theater. This is insanity.”

Public health experts are aghast at the way the administration is approaching the spread of Covid-19 within the highest echelons of the government and the Republican Party.

“Public officials who know they have been exposed to the virus and should be in quarantine are either displaying blatant arrogance or numbing ignorance,” Michael Osterholm, director of the University of Minnesota’s Center for Infectious Diseases Research and Policy, told STAT.

“The laws of virus transmission aren’t different for public officials than they are for everyone else,” he said.

A state public health official who asked not to be named for fear of reprisals, said in an email: “It is SO frustrating to have well-known elected officials disregarding public health guidance. It does not model the behavior we want to see in the public or that we expect of them.”

The official added: “Kids have to miss the sports they love to be in quarantine and our elected officials just ignore the guidance. It suggests that some people feel they are above looking out for the people around them.”

Though there seem to be many more Republican instances of flouting the guidance, public health experts have also raised concern about Democrats. Some question whether Democratic Party presidential nominee Joe Biden ought to be taking part in in-person campaigning, given he shared a debate stage last Tuesday with Trump, who was certainly already infected by that time and may have been emitting virus. The Biden campaign said Sunday night that Biden tested negative for the coronavirus for the third time since the debate.

Others question whether Biden’s running mate, Sen. Kamala Harris (D-Calif.), should take part in a live debate this week with Pence. Physician Nancy Snyderman, NBC’s former chief medical editor, lost her job for breaking quarantine after returning from an assignment in an Ebola outbreak.

On Sunday, Snyderman called for the debate to be moved to a virtual format. “Will one of these doctors stand up to this crew and set them straight?” she tweeted.

The Centers for Disease Prevention and Control says people should wear masks when they are in public settings with others with whom they do not share a household. But President Trump has rarely been seen wearing a mask and has mocked people who do. He criticized Biden during last Tuesday’s debate for wearing a mask and accused a masked reporter at one of his press conferences of trying to be “politically correct.”

Olivia Troye, Pence’s former homeland security and counterterrorism adviser, has told reporters that the president would sometimes denigrate White House staffers if they wore masks at meetings, instructing them to take them off. (Troye recently left that role and declared she is voting for Biden for president.)

The CDC also recommends that people who test positive for the virus isolate themselves for 10 days from the point of their positive test if they don’t develop symptoms, and at least 10 days from the start of symptoms if they do become ill. People who have symptoms should remain in isolation for longer if they are continuing to run a fever, the guidance says.

People who have had close contact with someone who tested positive for Covid-19 should quarantine for 14 days after the exposure, the CDC says; quarantining is a way to try to halt onward transmission of the virus. The CDC defines close contact as being within 6 feet of someone for 15 minutes or longer or having been hugged or kissed by a person who later was diagnosed with Covid-19. Both Lee and New Jersey Gov. Chris Christie — who has also contracted the virus — were photographed embracing a number of other guests at the White House event for Coney Barrett.

Ashish Jha, dean of Brown University’s School of Public Health, said there appears to be a belief among prominent politicians that these public health rules do not apply to them.

“There’s almost this sense — and I see this with both quarantining and isolation — that, ‘Yeah, it would be nice to have. In the ideal world, sure, if we didn’t have a campaign going on. Sure, if there weren’t more urgent issues,’” he said.

But everyone who is asked to isolate or quarantine themselves by public health officials is inconvenienced — and yet the expectation is that they will do so for the greater public good.

“And the truth is in many ways it’s much, much easier for Vice President Pence to quarantine,’’ Jha said. “He’d do it in a nice home. He’d be able to do 90% of his work still. If you ask a person who’s basically an hourly wage worker to quarantine for two weeks because they’ve had a direct exposure, they lose their wages.”

Osterholm said the number of infections that have emerged within the president’s inner circle ought to serve as “an absolute wake-up call” that mask wearing, social distancing, isolating of the infected, and quarantining of their contacts must be taken seriously by the political class.

“This goes to both parties and all events over the next month,” he said, warning that failing to do so “is playing with both political and public health fire.”

Jha said politicians who think that testing negative after an exposure somehow gives them a get-out-of-quarantine card are wrong. Covid-19 tests aren’t 100% accurate and can produce both false positive and false negative results.

“Clearly somebody was infectious last Saturday at the White House. And they tested negative. So, what more proof do you need that testing isn’t going to get you where you need to be?” he asked.

“The lack of support for containment measures among political leaders has eroded public support for things like wearing masks and quarantining,” Jha said.

“The bottom line is that when our leaders undermine public health messaging by not doing it themselves, they send a very clear signal to the American people that this stuff is actually not that important,” he said.