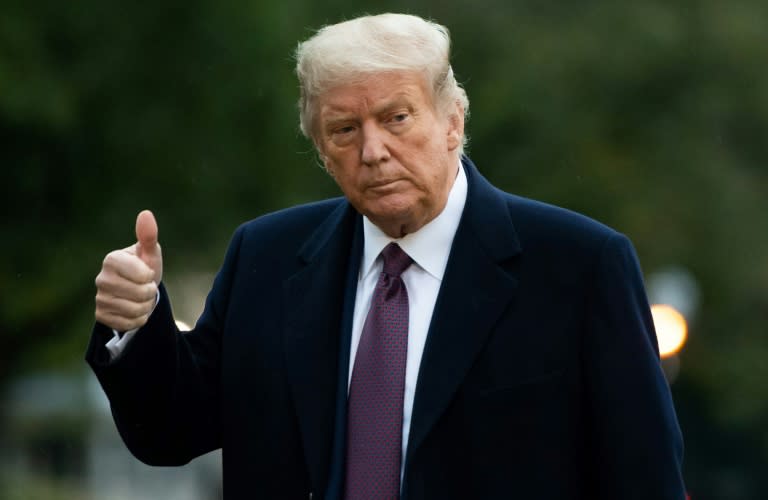 Donald Trump doesn’t drink or smoke and often boasts of being in excellent health, contrasting his vigor to that of his “low energy” opponents.

The 74-year-old US president has every chance of making a swift and complete recovery from the coronavirus, yet it remains a formidable and unpredictable enemy.

During the Republican primaries of 2016, he famously called rival Jeb Bush a man of “low energy,” a description he now applies to his Democratic opponent, former vice president Joe Biden — or more often “Sleepy Joe.”

In the last election campaign, he asserted that Hillary Clinton lacked “the mental and physical stamina” to become president and tried to portray her as partial to frequent naps.

Not only has Trump reprised similar attacks against Biden in 2020, but he’s gone on to mock his fellow septuagenarian’s stricter use of face masks as a sign of frailty.

“He shows up with the biggest mask I’ve ever seen!” Trump said at this week’s debate. The president also frequently suggests his opponent may be suffering from dementia and has said Biden “doesn’t know he’s alive.”

In 2015, his campaign released a letter claiming Trump’s lab results were “astonishingly excellent” and he would be the “healthiest individual ever elected to the presidency.” His physician later said Trump dictated the letter.

The president is also an avid golfer — an activity that provides moderate intensity physical activity — despite his reported penchant for taking mulligans.

But his decades-long reputation as a germophobe, who hates shaking hands and compulsively washes his own, is at striking odds with his aversion to wearing a mask: he was first seen with one on July 11, long after his own health officials had recommended their routine use.

We aren’t aware of any major health problems with the president. White House doctors, in relatively vague annual reports, have always certified he’s in good shape.

His blood pressure is a little high, a 2018 scan showed he has a common form of heart disease, and he has a known weakness for junk food and hamburgers.

And mystery continues to hang over an impromptu visit, one weekend in November 2019, to the Walter Reed military hospital near Washington: had he suffered from a mini-stroke?

“Perhaps they are referring to another candidate from another Party!” he retorted on Twitter.

But speculation about this possibility heightened over summer when he appeared to struggle to handle a glass of water with one hand, and walked gingerly down a small ramp.

The odds are on Trump’s side. Only five percent of people aged over 70 die from the virus, according to the statistics from the Centers for Disease Control and Prevention.

But the risk of developing a severe form of Covid-19 isn’t trivial. According to Dr Daniel Griffin, chief of infectious disease division for ProHEALTH Care Associates in New York, it’s about 20 percent given his age and weight.

“A person’s overall health status affects how they do with this disease,” said Griffin.

By now, the various stages of coronavirus infection are well known: the first week is the viral phase, where patients can have symptoms such as fever, cough and muscle pain — if they are lucky, these will be mild or not even occur at all.

If they’re unlucky and the disease progresses, the second week is critical.

This is when the virus itself takes a back seat to an out-of-control immune response attacking it, that can cause lasting organ damage, particularly to the lungs, with some patients needing to be intubated.

It’s not known when precisely Trump was infected, but it will take two weeks to know he’s definitely out of the woods.

In the end, “it’s a game of probability,” Gregory Poland, a professor of medicine at Mayo Clinic told AFP.

“We have children who die of this, we have strapping Big Ten football players who are just knocked out from this thing and develop myocarditis, inflammation of the heart… and then we have some nursing home patients who seem relatively unaffected.”