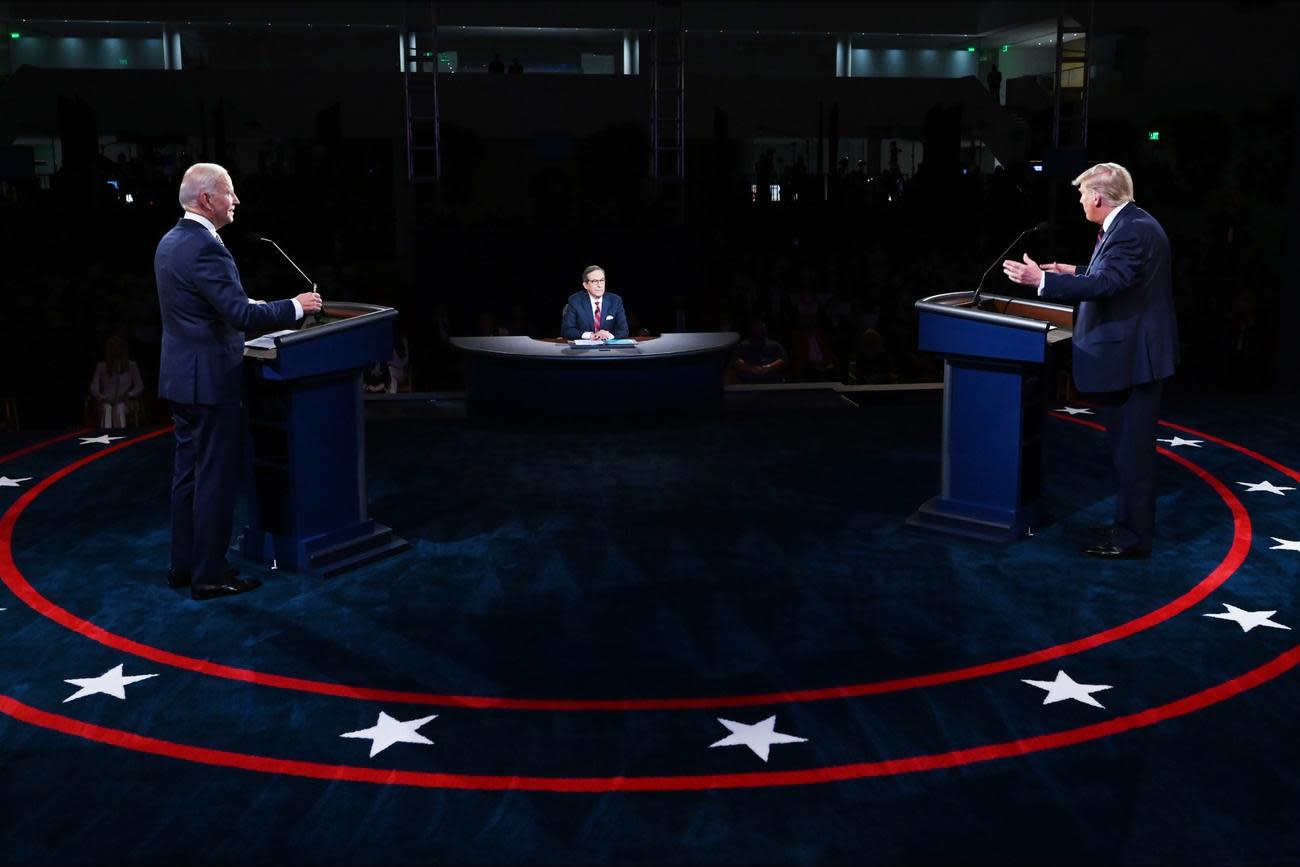 Military and veterans issues were not on the debate agenda, though neither candidate stuck to the plan. The issues surfaced only briefly on the periphery and then mostly as vehicles by both candidates to launch personal attacks.

Halfway through the 90-minute debate, Biden called Trump the “worst president America’s ever had.”

Trump responded that he had turned around a nation left in ruin by the Obama administration, including “fixing the broken military you gave me.”

The president said his administration is responsible for “rebuilding the military, including Space Force.”

Biden later pivoted off a question about another issue to charge that Trump had remained silent on allegations that Russia had put bounties on U.S. troops in Afghanistan because he is beholden to Russian President Vladimir Putin.

Defense Department officials, including Marine Gen. Frank McKenzie, head of U.S. Central Command, have said that they took the allegations of Russian bounties seriously but have found no corroborating evidence.

Both candidates cited the military again when asked about racial sensitivity and diversity training programs after the May 25 death of George Floyd in Minneapolis, caused by a police officer kneeling on his neck for nearly nine minutes.

Trump defended the executive order he issued last week banning diversity training programs in the military and the federal workforce that he says brand the U.S. as inherently racist. “It was a radical revolution that was taking place in our military,” he said of the training.

“Nobody’s doing that,” Biden said, adding that diversity training is needed to heal racial divides. He called the programs “the only way we’re going to bring the country together.”

One of the only references to veterans issues came when Trump cited improved approval ratings for the Department of Veterans Affairs.

“Joe, you’ve had 308,000 military people dying because you couldn’t provide them proper health care in the military. So don’t tell me about this,” Trump said, as Biden challenged him on his response to COVID-19.

While many observers seemed confused by this statement, Trump appeared to be referring to a 2015 report from the VA Inspector General that found more than 300,000 veterans likely died while waiting for health care amid long appointment backlogs.

The candidates’ policy positions on a range of issues were often difficult to assess amid the overtalk and backbiting that left the exasperated moderator, Chris Wallace of Fox News, pleading with Biden and Trump to give each other a chance to finish a sentence.

In general, Trump, trailing in national polls for months, sought to label Biden as mentally unfit and not up to the demands of the presidency; Biden sought to portray himself as a seasoned political operative who has the skills to unite a divided nation left in chaos by Trump’s time in office.

Trump led off the 90-minute debate, which was held with no breaks. It was sponsored by Case Western Reserve University and the Cleveland Clinic and held on the clinic’s Health Education Campus.

Neither candidate wore a face mask as they entered the stage before a small, socially distanced audience.

The tensions leading up to the first of three presidential debates and the amped-up rhetoric of the candidates’ supporters led to heightened security outside the venue, guarding against the possibility that potential protests would turn violent.

At the request of local police, Ohio Gov. Mike DeWine activated 300 members of the Ohio National Guard to assist in debate security to ensure a “safe and secure environment.”

Wallace set the format for the debate last week. It was supposed to have been broken up into six, 15-minute segments, including the respective records of the two candidates; the Supreme Court; COVID-19; the economy; race and violence in cities; and the integrity of the election system.

However, neither candidate stuck to the format.

Although military and veterans issues got little play, both candidates have previously staked out general positions on defense spending, the wars in Iraq and Afghanistan, and improving health care at the VA.

In an extensive survey of the candidates’ positions released Sept. 16 by the Military Officers Association of America, both Trump and Biden said they are committed to the full withdrawal of U.S. troops from Iraq and Afghanistan, but Biden said the move could be more drawn out to ensure stability in both nations.

“We can maintain a strong defense and protect our safety and security for less,” Biden told MOAA.

Trump made his administration’s enactment of the Mission Act, which expands private health care options for veterans, the centerpiece of his appeal to veterans.

He also has touted major increases in VA funding during his administration and the establishment of the VA Office of Accountability and Whistleblower Protection to clean up corruption at the department.

Biden has not challenged the Mission Act but said his administration would make it work more efficiently. He has promoted expanded benefits for Vietnam veterans exposed to Agent Orange, improved care for disabled and female veterans, new efforts to aid homeless veterans, and programs to cut veteran unemployment rates.

— Richard Sisk can be reached at [email protected]