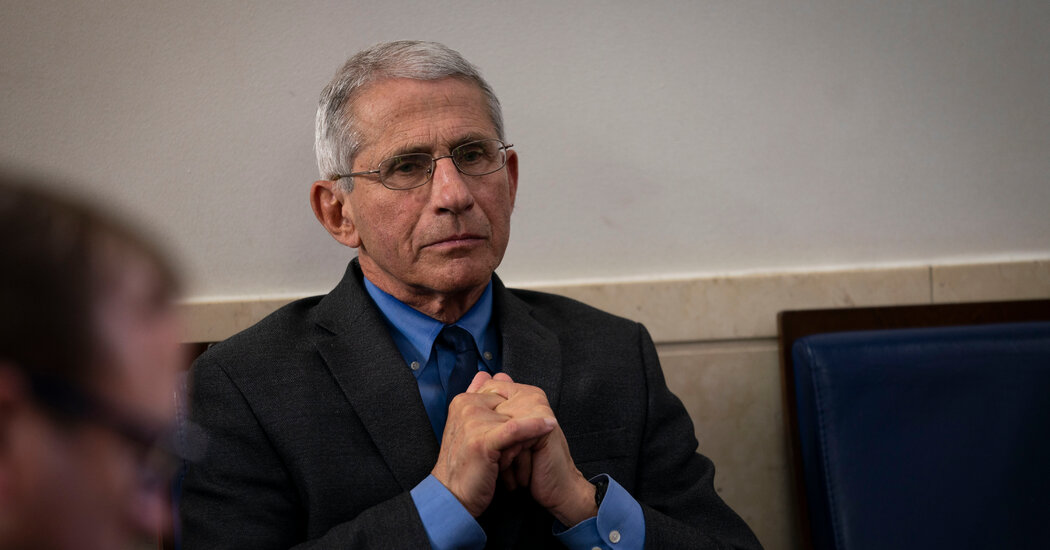 Even as President Trump returned to the campaign trail in Florida and announced plans to begin a full schedule of rallies, the nation’s top infectious disease expert, Dr. Anthony S. Fauci, warned, “We know that that is asking for trouble when you do that” at a time when coronavirus cases are surging in many states.

Dr. Fauci told CNN on Monday, “We’ve seen that when you have situations of congregate settings where there are a lot of people without masks, the data speak for themselves. It happens. And now is even more so a worse time to do that, because when you look at what’s going on in the United States, it’s really very troublesome.”

He noted that many states were now seeing increases in positive tests — “It’s going in the wrong direction right now,” he said — and suggested that Americans should be “doubling down” on precautions rather than casting them aside.

He said that people should continue to wear masks and practice social distancing — and avoid large gatherings — to prevent new outbreaks.

“That’s just a recipe of a real problem if we don’t get things under control before we get into that seasonal challenge,” he said.

Dr. Fauci’s comments came the day after he objected to a Trump campaign television ad that portrayed him as praising the president’s response to the pandemic.

Dr. Fauci reiterated on Monday that the ad had taken his past remarks out of context, and called his inclusion in it “very disappointing.” He said he had been speaking more broadly about the collaborative efforts of the federal government and was “not a political person.” Asked by CNN’s Jake Tapper whether the ad should be taken down, something the Trump campaign says it has no intention of doing, Dr. Fauci said, “I think so.”

In an interview with The Times on Monday, Dr. Fauci said that he had been unsuccessful so far in having the ad removed.

“I wouldn’t know who to contact in the campaign to tell them to pull it down,” he said. “I spoke to someone who I know well in the White House to figure it out for me and tell me how to get it down. I haven’t heard back from them yet.”

Dr. Fauci said that he did not want to be pulled into the fray of the campaign.

“I never in my five decades ever directly or indirectly supported a political candidate and I’m not going to start now,” he said. “I do not want to be involved in it.”

Dr. Fauci made an even more pointed criticism of the Trump campaign in an interview on Monday with The Daily Beast.

“By doing this against my will they are, in effect, harassing me,” he said. But he said he had not thought about quitting — “not in my wildest freakin’ dreams.”