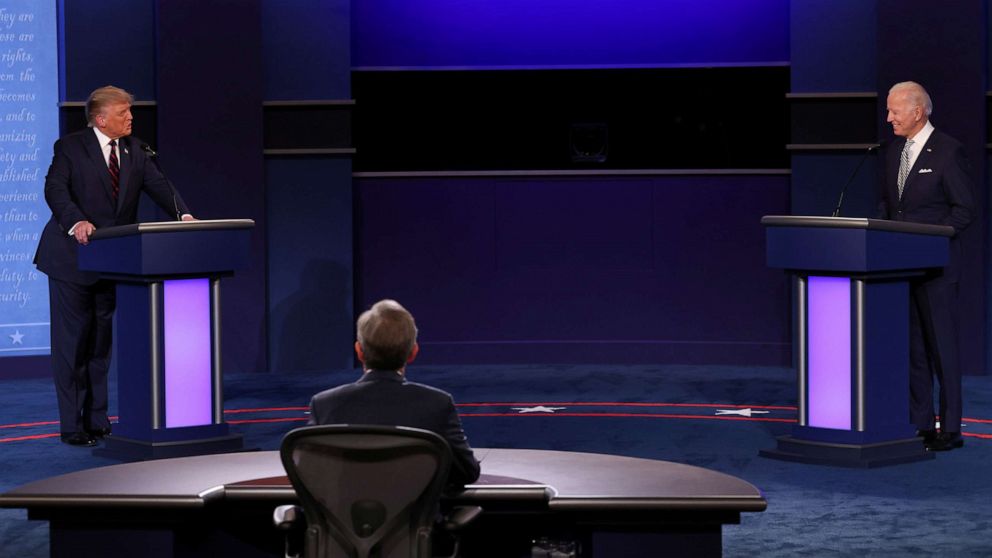 President Donald Trump and Democratic nominee for president Joe Biden face off in the first presidential debate of 2020 Tuesday night in Cleveland.

Topics include Trump’s and Biden’s records, the Supreme Court, COVID-19, the economy, race and violence in U.S. cities, and the integrity of the election.

Below, ABC News will fact check what both candidates say throughout the 90-minute debate, moderated by Chris Wallace of “Fox News Sunday.”

Please refresh for the newest information.

A vaccine is not likely weeks away, despite Trump’s claim

TRUMP’S CLAIM: “And now, we’re weeks away from a vaccine.”

FACT CHECK: Most prominent public health experts have said that a vaccine will not be widely available until mid-2021.

Even if a vaccine is authorized by the end of the year, that does not mean it will be widely available. At first, only limited supplies will be available, and they will be prioritized for the most vulnerable. “By the time you mobilize the distribution of the vaccinations and you get the majority or more of the population vaccinated and protected, that’s likely not going to happen until the mid- or end of 2021,” Dr. Anthony Fauci, the nation’s top expert on infectious diseases, told MSNBC’s Andrea Mitchell earlier this month.

In a recent Senate hearing, Centers for Disease Control and Prevention Director Robert Redfield echoed those sentiments, “I think there will be [a] vaccine that will initially be available sometime between November and December, but very limited supply, and it will have to be prioritized,” but, he said, “If you’re asking me when is it going to be generally available to the American public so we can begin to take advantage of vaccine to get back to our regular life, I think we’re probably looking at late second quarter, third quarter 2021.”

There are over 100 million Americans in the US with preexisting conditions, studies show

FACT CHECK: 100 million or more people have preexisting conditions in the U.S.

Biden said during the debate that “100 million people” have preexisting conditions, while Trump said that number was “totally wrong.”

“There aren’t 100 million people with preexisting conditions,” Trump said. The two candidates were debating about the path forward for health care in America.

One study by the Health and Human Services Department in 2017 found that a large percentage of non-elderly Americans have preexisting health conditions, ranging from 61 million to 133 million.

The study found that “at least 23 percent of Americans (61 million people) using a narrow definition based on eligibility criteria for pre-ACA state high-risk pools, or as many as 51 percent (133 million people) using a broader definition closer to the underwriting criteria used by insurers prior to the ACA” could have been denied health care or offered it at a high price before the Affordable Care Act passed because of preexisting conditions. The study was published under the Obama administration.

TRUMP’S CLAIM: “Once you became vice president, [Hunter Biden] made a fortune in Ukraine and China and Moscow and various other places. He made a fortune, and he didn’t have a job.”

FACT CHECK: While the exact sum of Hunter Biden’s foreign business ventures is unclear, ethics experts have broadly taken issue with them – particularly those in places like Ukraine and China, at a time when his father was fronting U.S. policy there.

Robert Weissman, the president of progressive watchdog group Public Citizen, told ABC News last year, “at absolute minimum there’s a huge appearance of conflict … [Joe Biden] should have encouraged his son to not take these positions.”

Still, Weissman called Hunter Biden’s business activity “orders of magnitude” less troubling than how the Trump family has operated its businesses during the Trump administration.

In an interview with ABC News last year, Hunter Biden said he exercised “poor judgment,” but maintained that he made no “ethical lapses.”

“I gave a hook to some very unethical people to act in illegal ways to try to do some harm to my father. That’s where I made the mistake,” he said. “So I take full responsibility for that. Did I do anything improper? No, not in any way. Not in any way whatsoever.”

In their 87-page report released last week, Senate Republicans concluded that Hunter Biden’s overseas endeavors were “awkward” and at times “problematic,” but stopped short of identifying any criminal activity on Hunter Biden’s part or (perhaps more relevant to tonight’s debate) any wrongdoing on Joe Biden’s part.

As part of their report, Republicans highlighted an alleged $3.5 million wire transfer sent from Elena Baturina, the billionaire wife of the former mayor of Moscow, to a bank account tied to Rosemont Seneca Thornton LLC, a consultant group that the committee said was co-founded by Hunter Biden.

George Mesires, a lawyer for Hunter Biden, dismissed the claim outright as “false,” adding that Hunter Biden “had no interest in and was not a ‘co-founder’ of Rosemont Seneca Thornton, so the claim that he was paid $3.5 million is false.”

Hunter Biden was involved with Rosemont Seneca Partners — not Rosemont Seneca Thornton, as the Senate Republicans claimed. The two are separate entities, according to Mesires.

Politico reported on Monday that Trump also sought to engage Baturina’s husband, the former Moscow mayor, for business opportunities prior to his time in office.

Trump is wrong to suggest Biden is pushing for ‘socialized medicine’

TRUMP’S CLAIM: Trump claimed that the Unity Task Forces recommendations between Biden and Sen. Bernie Sanders following the Democratic primary, which the president called a “manifesto,” meant Biden is pushing for “socialized medicine.”

FACT CHECK: The claim doesn’t line up with the health care plan Biden has put forward, and the task force recommendations are not binding.

Trump said at Tuesday’s debate that Biden “agreed with Bernie Sanders on a plan. Absolutely agreed to socialized … socialized medicine.”

While the unity task force calls for the establishment of a “high-quality public option plan” that is administered by the government and not private companies, it is not a binding document and it does not mention “Medicare for All” or the elimination of private insurance.

Also, the former vice president has repeatedly said he does not support socialized medicine, including throughout the Democratic primary. Instead, he has called for building on the Affordable Care Act, which does not eliminate private insurance.

Biden’s stance against Medicare for All, which would overhaul the health care system and implement a single-payer, government-run system was a signature position throughout the Democratic primary.

Biden has also stated that even the coronavirus pandemic has not changed his mind on not supporting a single-payer health care system. “Single-payer will not solve that at all,” Biden said during an interview on MSNBC.

Trump rallies have been held indoors, with COVID-19 cases linked to them

TRUMP’S CLAIM: Trump claims his campaign rallies have been “outside” and had “no negative effect” on the spread of COVID-19.

FACT CHECK: At the debate, Trump defended his campaign’s decision to continue holding large-scale, mostly maskless campaign rallies in the middle of a pandemic, claiming that he has held them outside and that they had “no negative effect,” even though at least one rally has been held indoors and multiple cases of COVID-19 have likely been linked to them.

After Trump’s very first rally in Tulsa, Oklahoma, on June 20, the city county health director there said the rally “more than likely contributed” to the surge of cases the followed in the area soon after. Eight of President Donald Trump’s campaign staffers also tested positive for COVID-19 later that month, with two of them receiving positive results after attending the same Tulsa rally, the Trump campaign confirmed to ABC News.

Last week, the Michigan Department of Health also confirmed at least one person who had attended Trump’s rally in Freeland, Michigan, on Sept. 10 had tested positive for the virus. The health department, however, said it was unclear whether the person had the virus prior to attending the rally or contracted while there or after, and was “unaware” of any outbreak associated with the rally. More broadly, no major outbreaks have been directly connected to the rallies.

Minnesota Department of Human Services spokesperson David Verhasselt told ABC News that a “couple of” individuals who went to Trump’s rally there in Aug. 17, had tested positive for the coronavirus, but added that “we only know what people tell us,” saying that “it is possible that we are seeing cases in individuals who choose not to fully declare their activities.”

“We just don’t know what people don’t tell us,” he said.

Most recently, a Wisconsin health department also confirmed at least one case had been linked to Trump’s rally in Oshkosh, Wisconsin, in August.

The president has also held at least one indoor rally in recent weeks, though most of them have taken place in semi-outdoor airport hangars, which Dr. Anthony Fauci, the nation’s top infectious disease specialist, said was an improvement.

“If you have to get a group of people together for whatever purpose, do it outdoors,” Fauci said. “If you do it in a semi-indoor [location], make it modified indoor with an incredible amount of airflow and wear a mask.”

BIDEN’S CLAIM: “He has executive orders that have no power. He hasn’t lowered drug costs for anybody.”

FACT CHECK: Trump signed an executive order in September aimed at lowering drug costs by trying to reduce the prices Medicare pays for prescription drugs, but experts have said it is unclear what authority the president has to carry it out.

His orders, if enacted, would lower drug prices by directing drugmakers to offer their medicines to Medicare at the same prices they do in other countries. However, the process is likely to take months, and court challenges should be expected.

Even though the president claimed that “drug prices will be coming down 80% or 90%,” the president has not yet produced a plan that would lower drug prices by that amount for the majority of Americans, despite promising to do so since taking office four years ago. In fact, according to groups that track drug prices, pharmaceutical companies have continued to hike costs on drugs this year. In an analysis released earlier this month, GoodRx found drug prices are surging faster than any other medical service or good, increasing by 33% since 2014.

What Trump has done is try to increase the availability of generics. He also has tried to curb costs paid by seniors on Medicare, the government-run health care insurance plan for older Americans.

But the administration’s latest plan on insulin — limiting Medicare copays to $35 per month — doesn’t start until next year, according to details released by his administration. And while many insulin makers have agreed to limit costs, there’s no guarantee that insulin will become cheaper for Americans not on Medicare. According to SingleCare, a single vial can cost $250.

Trump has focused on forest management when talking about wildfires in western states, often criticizing local leaders who have disagreed with his response to climate change.

While decisions about how to manage forests and wildfires are important, Trump’s stance disregards evidence that climate change is playing a significant role in why wildfires have become so destructive in recent years.

During a briefing on wildfires in California earlier this month Trump refuted State Secretary for Natural Resources Wade Crawfoot when he described the impact of increasing heat and drought on the conditions that lead to fires. Trump said, “It’ll start getting cooler,” directly contradicting conclusions by climate scientists who argue temperatures around the world will continue to rise by saying, “I don’t think science knows actually.”

Increasing heat and droughts are “supercharging” wildfires by creating drier conditions for trees and brush. Warmer temperatures have also decreased moisture from melting snow and allowed bark beetles to travel further north, killing millions of trees, according to the National Climate Assessment published in 2018.

As the planet continues to warm, those conditions will only get worse, making wildfires more dangerous, climate scientists say.

The majority of land impacted by wildfires in states like California, Washington and Oregon is also managed by the federal government, which proactively removes dead trees and brush and conducts controlled burns to keep forests healthy.