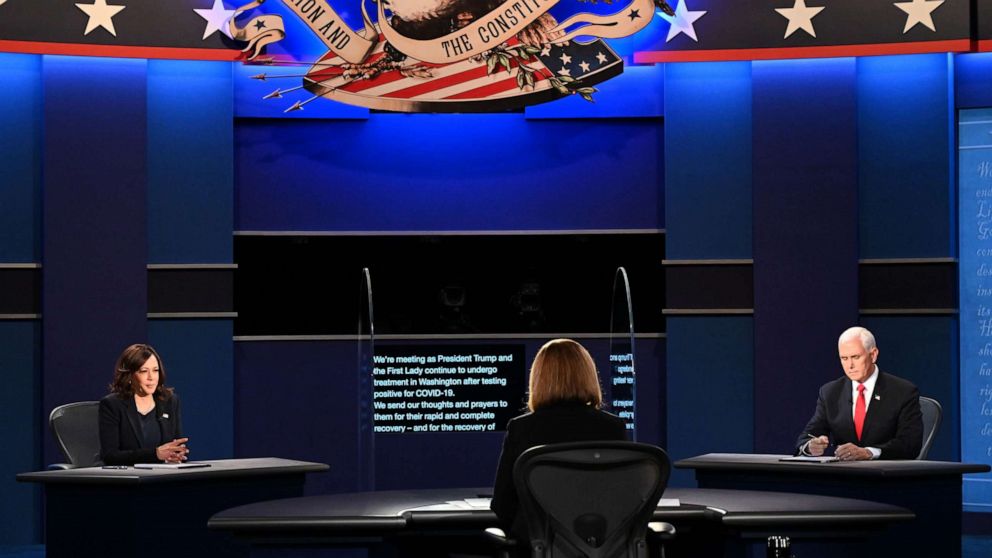 Below, ABC News will fact check what both candidates say. Refresh for the latest updates.

FACT CHECK: While Pence is correct that the Centers for Disease Control and Prevention estimates the 2009 swine flu pandemic infected an estimated 60.8 million Americans in its first year, it is misleading to compare the two outbreaks given H1N1’s far lower fatality rate, and similarly misleading to call the Obama administration’s response a “failure.”

The CDC estimates up to 575,000 lives were lost to the swine flu worldwide. Of those, fewer than 13,000 were American, due in part to the Obama administration’s “complex, multi-faceted and long-term response,” the CDC later wrote. Thus far, COVID-19 has taken the lives of over 210,000 Americans, a little over eight months since the first known case of the virus was discovered in the United States.

“The team, in my opinion, in 2009, really demonstrated that the planning was worth it. Nothing is ever perfect. But I felt just so impressed and so proud of the job CDC did in 2009,” Dr. Julie Gerberding, a CDC director during the George W. Bush administration, told ABC News.

PENCE’S CLAIM: “Before there were more than five cases in the United States, all people who had returned from China, President Donald Trump did what no other American president had ever done. And that was, he suspended all travel from China, the second-largest economy in the world.”

FACT CHECK: At the end of January, President Donald Trump issued a proclamation to restrict travelers who had visited China in the previous 14 days from entering the United States, but it was more narrow than Pence described. The orders did not apply to U.S. citizens, green card holders and their close family members. Health care workers were also exempt.

Nearly 760,000 people entered the U.S. from China between December of last year and February, according to an ABC News review of traveler data.

Restrictions on travelers from Europe started in March. An April study from researchers at the Icahn School of Medicine at Mount Sinai found the first coronavirus cases in New York originated from Europe, not China.

Pence defends White House event after over a dozen COVID-19 cases, does not mention indoor portion

PENCE’S CLAIM: “It was an outdoor event, which all of our scientists regularly and routinely advise.”

FACT CHECK: Vice President Mike Pence defended the 200-person event the Trump administration held at the White House on Sept. 26 when President Donald Trump announced he would nominate Judge Amy Coney Barrett to the Supreme Court — despite the fact that over a dozen guests who attended have since tested positive, including the president and first lady Melania Trump.

While the main ceremony was held outside in the Rose Garden, numerous guests, including Trump, attended an indoor reception in the Diplomatic Room in the White House afterward. At least five people who attended the indoor portion of the event have since tested positive, including former New Jersey Gov. Chris Christie, Sen. Thom Tillis, R-N.C., and Sen. Mike Lee, R-Utah.

Public health experts have repeatedly advised against indoor events, which has found renewed importance in light of recent Centers for Disease Control and Prevention guidance advising that the virus can spread beyond 6 feet indoors.

Even for outdoor events, public health experts encourage wearing masks and maintaining 6 feet of distance from others. The Rose Garden event did not follow either of these social distancing norms; chairs were not spaced out, few guests opted to wear masks and guests hugged and shook hands.

The coronavirus outbreak has infected “34 White House staffers and other contacts” in recent days, according to an internal government memo, an indication that the disease has spread among more people than previous known in the seat of American government, according to an ABC News report.

PENCE’S CLAIM: “When President Trump and I took office, America had gone through the slowest economic recovery since the great depression. … We’re going through a pandemic that lost 22 million jobs at the height, we’ve already added back 11.6 million jobs.”

FACT CHECK: With September’s jobs report, over 11.4 million jobs have been added since March. But job gains have slowed in the past three months, showing the recovery is starting to lose momentum.

The jobs number represented a significant slowdown in the number of jobs added since the economy started opening up after the pandemic induced shutdown.

Airlines such as United and American notified over 30,000 employees that they would be laid off or furloughed because the federal aid expired. Disney, the parent company of ABC News, announced it was eliminating 28,000 theme park jobs in Florida and California, and Cineworld, parent company of Regal Cinemas, the second-largest theater chain in the United States, said Monday that it will close all of its U.S. and U.K. theaters indefinitely, affecting 45,000 employees. These positions weren’t included in the September report.

In September, the number of permanent job losses increased by 345,000 to 3.8 million; this measure has risen by 2.5 million since February.

Though the expansion of the U.S. economy was slow under the start of the Obama administration during the Great Recession, in the final four years GDP growth was at a 2.3%, nearly similar to the 2.5% in the first three years of Trump, according to The Associated Press.

Trump has released financial records required by law – but has been significantly less transparent than Biden, predecessors

HARRIS’ CLAIM: “Joe Biden has been so incredibly transparent, and certainly by contrast, the president has not. Both in terms of health records, but also let’s look at taxes. We now know because of great investigative journalism that Donald Trump paid $750 in taxes. When I first heard about it, I literally said, you mean $750,000? And it was like, no, $750. We now know Donald Trump owes and is in debt for $400 million.”

PENCE’S CLAIM: “The president said those public reports are not accurate and the president’s also released literally stacks of financial disclosures the American people can review just as the law allows.”

FACT CHECK: As a presidential candidate in 2016 and as a sitting president since, Donald Trump has released annual financial disclosure reports filed to the Federal Election Commission and the Office of Government Ethics, as required by federal laws. Trump’s annual personal financial records, which are nearly 100-page each, show his source of income, other assets, as well as liabilities.

Trump, however, has not released his personal tax records, which is not required by law but has been a decades-long tradition that has been followed by his predecessors in the White House.

Harris’ claim that Trump paid just $750 in taxes comes from The New York Times’ recent report. According to the Times, Trump’s tax records show that he paid just $750 in federal income taxes the year he ran for president and his first year in the White House.

The report also stated that Trump is personally responsible for loans and other debts totaling $421 million, “with most of it coming due within four years.”

PENCE’S CLAIM: “They want to abolish fossil fuels and ban fracking, which would cost hundreds of thousands of American jobs all across the heartland.”

HARRIS’ RESPONSE: “I will repeat, and the American people know, that Joe Biden will not ban fracking.”

FACT CHECK: While Harris did support banning fracking as a presidential candidate, she has since fallen in line with Biden, who does not want to ban fracking.

Biden has said that he doesn’t want to add new fracking on public lands. He wants to move away from fracking to eventually get net-zero emissions. He has also argued that a transition to clear energy is necessary to keep people employed.

Biden’s environmental plan calls for an end to fossil fuel subsidies and for a massive investment in clean energy, including training fossil fuel workers for clean energy jobs.

In July 2019, Biden was asked during a CNN debate if there would be a place for fossil fuels, like coal and fracking, in a Biden administration. “We would make sure it’s eliminated,” he answered. After his comment, Biden’s campaign clarified that he was referring to fracking on public lands.