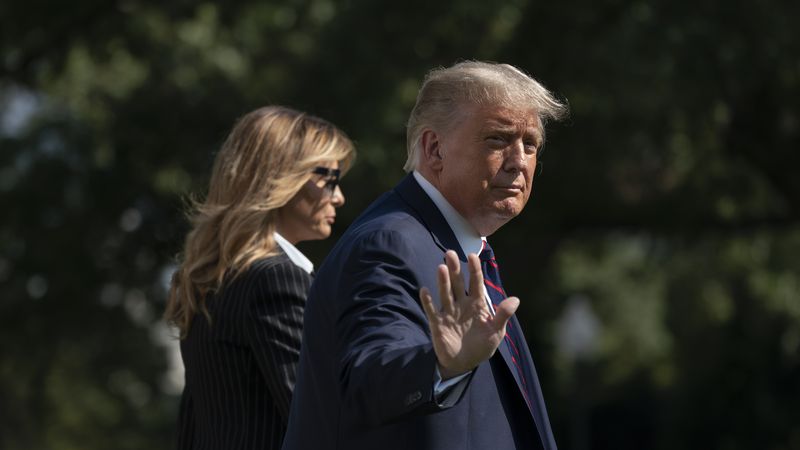 In the early morning hours after Donald Trump tweeted that he and first lady Melania Trump had tested positive for the coronavirus, misinformation about the president’s condition ballooned on social media.

Facebook users falsely claimed that The Simpsons predicted Trump’s death. A screenshot of a fake fundraising plea from the Trump campaign circulated on Twitter. And some doubted that the president was sick at all, instead theorizing that Trump was faking his diagnosis to get out of future presidential debates.

PolitiFact fact-checked several widely shared falsehoods about Trump’s coronavirus diagnosis. If you see another social media post you want us to fact-check, send it to [email protected]

Overnight, people across the political spectrum tweeted and posted on Facebook with doubt about Trump’s results. Some wondered why they should trust a president who has downplayed the danger of the virus, speculating that a forged positive COVID-19 test could somehow offer him a political advantage.

Supporters of the baseless QAnon conspiracy theory claimed that Trump’s positive diagnosis was a hoax portending the imminent arrest of Hillary Clinton, saying “it’s a cover for the storm to happen.” (“The storm” is a QAnon term referring to the mass arrest of people who Q followers believe belong to a powerful, cannibalistic pedophile ring.)

RELATED: Trump’s health and COVID-19: Here’s what we know

The speculation and unfounded theories are outweighed by the significant amount of evidence showing that Trump does, in fact, have COVID-19:

A fundraising email from Trump’s re-election campaign asking for $421 million is fake — we rated it Pants on Fire!

A screenshot of the bogus email leads with the news of the positive results for the president and first lady. Then, it pivots to a fundraising plea.

“President Trump would like to ask a favor. Will you please DONATE to help him recover from this disease?” says the email, which was shared by Rev. James Woodall, president of the Georgia NAACP. “It is only fair since he has sacrificed millions of dollars as your President.”

The Trump campaign confirmed to us that the email isn’t real. So did the Republican National Committee. One clue that it’s not authentic: The email asks for the exact amount that the New York Times reported Trump owes in loans and other debts.

Facebook posts claiming that the long-running TV show The Simpsons had featured Trump in a coffin are inaccurate — we rated them Pants on Fire!

That image of Trump purportedly in a coffin in an episode of The Simpsons has been circulating for years and has been debunked. Snopes in February 2017 reported that the image did not appear in The Simpsons, and while its origins are unclear, it appears to have been promoted on the fringe forum website 4chan.

The Simpsons has featured Trump before, but we found no indication that the show aired an episode of him in a coffin.

‘Doomsday planes’ and Trump’s diagnosis are not related

People are speculating that the flight of two “doomsday planes” and Trump’s positive coronavirus diagnosis are related.

We rated that claim False. Military officials say the two events are not related.

After news broke on Oct. 1 that Hope Hicks, a Trump aide who had been traveling with the president, had tested positive for COVID-19, a man named Tim Hogan tweeted about E-6B Mercury aircrafts that he said appeared on the East and West coasts of the United States.

An E-6B Mercury aircraft is an airborne nuclear command center that’s known as a “Doomsday Plane” because it’s designed to keep the National Command Authority in contact with Naval nuclear forces in a crisis, the Washingtonian explained in a story about the planes. The Navy has 16 such planes and one is often in the air, according to Forbes.

However, U.S. Strategic Command told Business Insider that “these flights were pre-planned missions” and that “any timing to the president’s announcement is purely coincidental.” according to the outlet’s Oct. 2 story.

Claim that ‘no prominent Democrats’ have had virus is False

In an Oct. 2 tweet, DeAnna Lorraine said: “Does anyone else find it odd that no prominent Democrats have had the virus but the list of Republicans goes on and on?”

Lorraine is a former Republican congressional candidate who lost a primary bid to represent California’s 12th Congressional District this year.

Not this time. Trump never tweeted that. Several websites make it easy for anyone to write fake tweets from public Twitter users. The coronavirus did not exist prior to 2019.

RELATED: How to find reliable information about Trump’s COVID-19 diagnosis

HOW CORONAVIRUS IS SPREADING IN FLORIDA: Find the latest numbers for your county, city or zip code.

FACE MASKS: Read the latest on guidelines, tips for comfort and long-term wear

GET THE DAYSTARTER MORNING UPDATE: Sign up to receive the most up-to-date information.

THE CORONAVIRUS SCRAPBOOK: We collected your stories, pictures, songs, recipes, journals and more to show what life has been like during the pandemic.

A TRIBUTE TO THE FLORIDIANS TAKEN BY THE CORONAVIRUS: They were parents and retirees, police officer and doctors, imperfect but loved deeply.

HAVE A TIP?: Send us confidential news tips

We’re working hard to bring you the latest news on the coronavirus in Florida. This effort takes a lot of resources to gather and update. If you haven’t already subscribed, please consider buying a print or digital subscription.